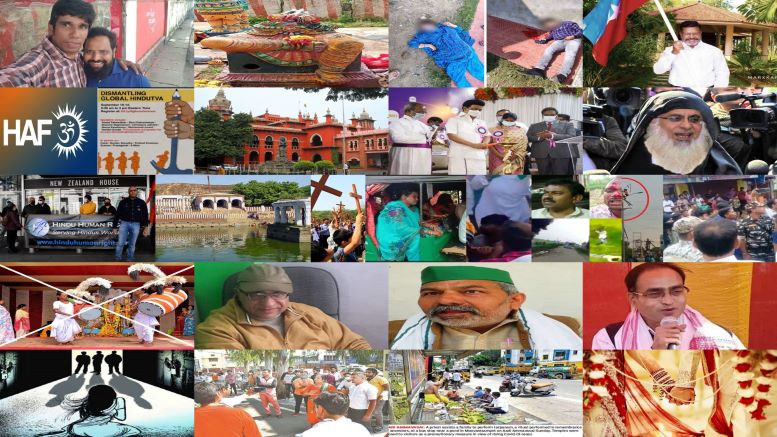 In this weekly summary for the period from 3 October to 9 October 2021, we hope to provide a snapshot of such crimes and hopefully awaken more people around the world to this human rights crisis:

1) An HRCE official has been accused of giving away temple land to Christians to build a church. The official was accused of the same and the court found him guilty of dereliction of duty in 2009. Yet the officer was again appointed in the same temple. Veluchamy, the Executive Officer of Vallioor Murugan temple was transferred in 2009 after allegations of him giving up temple land to Christians were found to be true.

2) In a tragic incident, 8 lives were lost in Lakhimpur, Uttar Pradesh. While four of the dead are from “farmers” protesting against the farm laws who apparently died after coming under a car, the other four are BJP workers, who were lynched by the “farmers” after the accident.

3) Tamil Nadu CM MK Stalin expressed his gratitude to Christians for electing DMK to power. Inaugurating the 75th anniversary of the Church of South India, he said that his government was formed because of Christians.

4) A church in Roorkee has been accused of luring people to convert their religion using cash inducements and promises of getting them employed. A woman has alleged that the church offered her two lakhs rupees and promised her a job and house if she embraced Christianity.

5) Assam Congress MLA Sherman Ali Ahmed has been arrested for making inflammatory remarks about the ‘martyrs’ of Assam agitation. He made the comment in support of the Bangladeshi Muslim encroachers calling the martyrs “murderers”.

6) A 27-year-old woman was gang-raped in Delhi but the media hid the name of the key accused auto-rickshaw driver. We spoke to IP Estate Police Station in Delhi, who redirected us to Kamla Market Police Station. After speaking to two more police officials, one of them reluctantly divulged that the arrested auto-rickshaw driver’s name is Salman, and the identity of the other 3 accused is not known.

7) The Manyavar Ad attracted huge backlash for its uninformed commentary on the Hindu wedding ritual of Kanyadaan. However, much before the release of the festive wear brand’s commercial, the Times of India (ToI) featured a similar piece, denigrating several rituals of the Hindu Vedic wedding.

8) Chidambaram MP Thirumavalavan has sparked a controversy by equating the national flag with his party flag and stoking separatism. Thirumavalavan is the chief of Viduthalai Chiruthaigal Katchi which is an ally of DMK. His comment has drawn widespread criticism as it amounts to treason.

11) The Indian Secular Republic’s war on Hindu festivals continues unabated. But the latest guidelines issued by Bengaluru corporation BBMP as per news agency ANI push the boundaries even further. It says that no drums, dhak (a traditional Bengali drum played during Durga Puja) will be allowed during the visarjan procession.

12) A Muslim mob in Chattisgarh’s Kavardha has been caught on camera attacking Hindus and insulting the Hindu saffron flag. The mob, supposedly enjoying the protection of Kavardha’s Muslim MLA, went on a rampage against Hindus while the police remained mute spectators and state CM Bhupendra Baghel was away in UP doing politics.

13) A case of attempted mass conversion has been reported from Ayodhya, Uttar Pradesh, in which officials and police conducted a raid at the suspect’s residence.

13) BKU spokesperson Rakesh Tikait in his statement to the media was seen eulogizing Sikh radical Khalistani terrorist Bhindranwale who was responsible for the persecution of Hindus in the 80s & 90s leading to their subsequent exodus from Punjab. Following a Congress leader justifying the mob lynching of Hindus in Lakhimpur Kheri, Rakesh Tikait also justified the heinous act. Furthermore, he dehumanized the deaths of four Hindus by calling them ‘maneaters’.

14) The spate of murders of Hindus, other Dharmiks, and munafiq Muslims continues unabated in Kashmir. After 3 civilians were murdered on Tuesday, news has just come in of another dastardly attack by Islamic terrorists.

15) Murtis of Hindu deities were vandalized by anti-Hindu elements in Siruvachur, Tamil Nadu. They were found in a beheaded state with their hands and other parts chopped off. Desecration and demolition of temples and murtis have increased since DMK came to power in May.

16) In Kerala, the arrest of a fraudster named Monson Mavunkal sheds light on a conspiracy to destroy the Hindu traditions and rituals at Sabarimala Temple using counterfeit documents. To achieve their evil goals, there was complicity between government employees, left-leaning media, and more importantly, their CPM paymasters who are in power since 2016.

17) The Jammu and Kashmir Police on Saturday, October 2, informed that the Bargheshekha Bhagwati Mata temple which is situated at Mattan Mountain ridge in J&K’s Anantnag district has been vandalized by unidentified miscreants. According to police officials, the information was shared by some sources at around 2 PM on the day of the incident.

18) In another show of his hatred for Hindus, evangelist Mohan C Lazarus has compared “vigraha Aradhana” (or murti puja, aka ‘idol worship’ for Abrahamics) with prostitution. Lazarus was pulled up by the court for saying that temples in Tamil Nadu are ‘forts of Satan’. In an attempt to explain his stance, he has made another derogatory remark by saying that murti puja and prostitution invite the wrath of God.

19) A Lutheran Church Bishop has been accused of corruption in appointing teachers in government-paid positions and converting people by luring them with government jobs. Followers of the church have filed a complaint with CM MK Stalin in this regard and requested him to save the church’s properties from the bishop.

20) Following constant harassment, a college lecturer’s family had filed a police complaint earlier this month against Shameer from Kattakada near Thiruvananthapuram. This led to the grooming jihadi allegedly kidnapping the Hindu lady. An incensed Shameer then sent threatening messages to her brother warning him of terrible consequences.

21) Andhra Hindus were shocked to see a gospel program broadcasted in the midst of a live telecast of Dasara celebrations in Kanaka Durga temple. Allegedly the operator continued to play the program even after being asked to stop it. However, temple authorities have claimed it to be an accident.

22) Delhi Police have registered a case under section 188 on the organizer of Delhi’s iconic Luv Kush Ramlila for allegedly ‘not adhering to COVID19 norms’. The event organizer has assured police that all COVID norms will be followed, said DCP North Sagar Singh Kalsi. Many are seeing this as a continuation of the undeclared war on Hindu festivals by the Indian secular state.

2) Dead bodies of a Hindu family were found hanging from a tree. Postmortem report by Govt. hospital Tando Allahyar, Sindh confirms that they were killed before hanging.

3) Mir Hassan and his friends tried to rape a Hindu girl Amarta Bheel, when the girl resisted they punished her by attacking & demolishing her home, beat her family & forced them to flee from the area. Victims asked goth Gulam Muhammad, Mirpurkhas police to help to return to home but police refused.

4) Another Hindu girl Muskan daughter of Ajeet Kumar recites KALAMA and was married off in Daherki, Sindh. Her family claims that she is abducted for sex slavery in the name of Islam and in the video, it is seen that she is highly intoxicated and under threat.

6) Another Hindu girl Tarkan Bheel was forcibly converted to Islam and married to Muhammad Shahnawaz Joyo in Tharparker, Sindh.

3) Vandals have desecrated murtis of Hindu deities that were being sculpted for the upcoming Durga Puja in Kushtia town of Bangladesh.

1) Human rights body Hindu Human Rights (HHR) held a protest outside New Zealand’s high commission in London to highlight how Massey University and NZ Herald have been complicit in fanning Hindu hatred and mainstreaming Hinduphobia (Hindumisia) in that country.

2) In a historic first for the Hindu American community, the Hindu American Foundation filed a Title VI complaint with the US Department of Education Office of Civil Rights against the University of Pennsylvania for its part in co-sponsoring the Dismantling Global Hindutva (DGH) conference which took place September 10–12, 2021 and a pattern of condoning hostility towards Hindu students and faculty.

3) Indigenous communities all over the world are threatened by the scourge of Christian missionaries. In Bharat, we have seen how they spew venom at diverse Hindu communities, even comparing murti puja to prostitution.