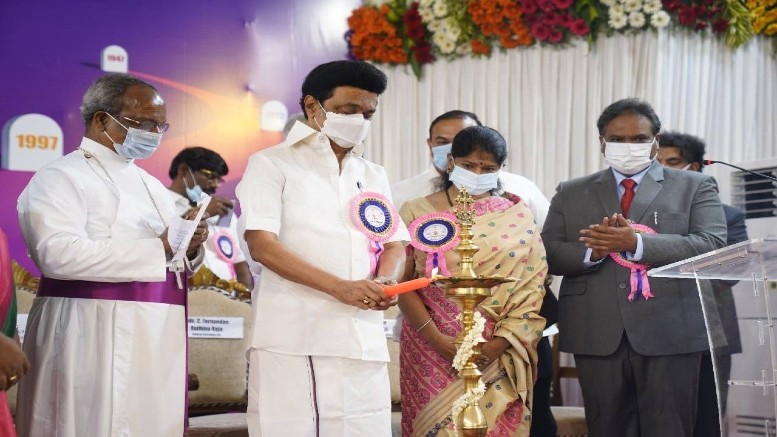 Tamil Nadu CM MK Stalin expressed his gratitude to Christians for electing DMK to power. Inaugurating the 75th anniversary of the Church of South India, he said that his government was formed because of Christians.

The Church of South India is celebrating its 75th year of commencing evangelistic mission in Bharat and CM MK Stalin was invited as the chief guest to inaugurate the function. There he spoke, “I would like to express my heartfelt wishes to the traditional and ancient Church of South India on its 75th anniversary. I am glad to have inaugurated your 75th anniversary celebrations. As it marches on the path of ensuring “Education and Medicine for All” by establishing many educational institutions and hospitals across the country, CSI is a treasure to both India and Tamil Nadu.”

Missing the fact that CSI is a Christian denomination, he heaped praises on the missionaries saying that they have helped in creating a casteless, religionless society. He said , “I would like to convey my, especially the TN government’s appreciation towards your works. You have turned serving the Tamil people into a movement. I remember with gratitude your valuable service for the welfare of a casteless, religionless society in accordance with India’s religious harmony and secularism. I express my heartfelt wishes for CSI to continue marching down its victorious path and be victorious in all its efforts.”

The most important part of his speech is where he said, “The government in power in Tamil Nadu was “created/formed” by you”. A few months ago a Catholic priest, George Ponnaiah, had said that the DMK being in power is alms given by Christians and Muslims. Complaints were filed against him and police made a great show of arresting him. However, mere days after his arrest a minister in Stalin’s government said to a Christian audience that it was because of Christians’ prayers that DMK won the election.

Now the CM himself has affirmed it by saying that his government was formed because of Christians. While the presence of Inigo Irudaya Raj and Dr.Ezhilan doesn’t surprise us, the presence of HRCE minister Sekar Babu piques one’s interest. Ezra Sargunam, an influential CSI bishop and a close acquaintance of MK Stalin, had abused Hindu Dharma in the crudest terms possible. He said that anyone who says there is a religion named Hindu must be punched in the face till blood is drawn. He also denigrated Bhagwan Ram and said that Jesus is superior.

Inigo Irudaya Raj had said “They(BJP) think they can obtain power by doing yagnas. In the 2019 polls both Christian and Muslim brothers will unite to defeat BJP and anyone who supports them which is our only duty”. He also revealed that Christian priests had advised him to forge an alliance between Congress and DMK to defeat Modi.

Dr.Ezhilan is the worst of them all, as he is a Hindu by certificate, and abused Bhagwan Vishnu and sages like Narada in the most vulgar terms that too in front of kids. He also intentionally distributed chicken biryani in front of a temple in Chennai. How can a minister who manages the affairs of Hindu temples be in the company of such Hindu haters and attend an explicitly religious event of Christians.

If the CM talks like this, in all probability Christians are abusing Hindus in that event. How can such a minister truly work for the betterment of temples and Hindus? How can a CM, partial towards Christians to the point of claiming that his government was formed because of them, be “secular” or treat everyone equally?