Anti-Hindu Periyarist with secessionist mindset given ticket by DMK 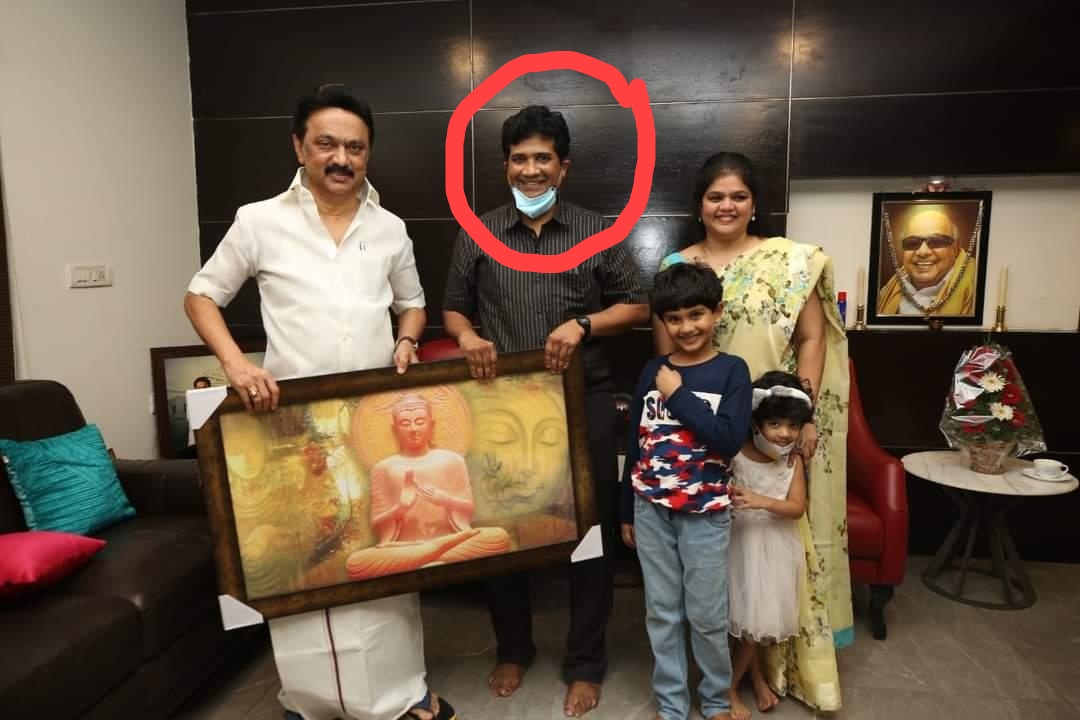 DMK announcing that the party will set aside Rs.1000 crores for the renovation of temples was touted by some as an indication of the party listening to Hindu voices and trying to change its anti-Hindu image. We cannot fault them, for recently DMK supremo and the party’s CM candidate Stalin even posed with Vel, the spear of deity Muruga, and claimed to have never been anti-Hindu! However, Stalin and DMK show this supposedly Hindu friendly face to the media only to garner votes. Away from the media glare, they nonchalantly do what they always do, i.e. promote an anti-Hindu mindset among the masses.

This has been proven by the fact that they have fielded a candidate with a deep-seated anti-Hindu mindset and even secessionism like good old EV Ramasamy. Ezhilan, a practicing doctor, has been given a ticket by DMK to contest from thousand lights constituency in Chennai. In an event, he could be seen talking in a very obscene way in front of children and women.

Slandering Sri Narayana (Bhagwan Vishnu) and Narada (Naratha) Muni and displaying a sickeningly lust-obsessed outlook, Ezhilan says, “Do you know Naratha? He wanted to have intercourse with beautiful women. That’s why he goes to Narayana saying ‘Narayana, Narayana’….When he asks for the same, Narayana says, ‘Go to every place, search in every household, you will find a dame’….what a wonderful god…So Naratha goes in search of women and looks into every house..but in every house he saw Narayana lying in the lap of the woman. Not only house by house, he even went village by village.. everywhere he saw Narayana lying on every woman’s lap..he was devastated and came back to Narayana lamenting that he deceived him.”

“‘I went to every house.. but you were everywhere..what shall I do?’ He thinks and makes a decision..’you are ‘maintaining’ these many women..so let me dedicate myself to you’..so he changes himself into a woman..and Narayana didn’t leave him alone either..Chithirai and Vichithirai are the children born through this association. What we are celebrating as the Tamil New Year (1st day of Tamil month Chithirai) isn’t really our New Year..these Tamil months are named after the children who were born to Narayana and Naratha”.

Ezhilan misinterprets the incident where Naratha asks how Shri Krishna satisfies the expectations of all his wives, that is 16,008. Naratha visits the house of each of those 16,008 women and finds Krishna everywhere, and his usual mischief to play one woman against another to trouble Krishna fails. In another incident, Vishnu taught Naratha about Maya in which Naratha is said to have turned into a woman after taking bath in a pond and married a king and had kids. It looks like Dr. Ezhilan distorted these stories out of context and mixed two separate instances to create a lewd story of his own.

Late DMK chief and ex-CM Karunanidhi in his tenure announced that 1st of Chithirai month won’t be celebrated as the Tamil New Year and rather 1st of Thai month, which is celebrated as Pongal, will be the Tamil New Year. But it was reversed by Jayalalitha when she came to power. Even now DMK has promised to make 1st of Thai month as New Year and declare Pongal as a ‘Cultural Festival’. Continued attempts to secularise Pongal, a Hindu festival should be remembered here. Tamil New Year is also a Hindu festival where Hindus pray to gods that they should have everything in abundance throughout the year by giving fresh fruits, vegetables, rice and lentils as naivedyam.

In another video, he can be heard deriding Hindus who wear Vibhuti and Kumkum, and mocking murti-puja.

He says “he will say I studied here, I studied there but when he goes to sleep he’ll wear Pattai (Tripundra)….after learning physics and maths.. he will go to physics class wearing Pattai and Namam (Urdhva Pundra)..what is the use of Pattai..what will happen if he wears that Pattai..isn’t this ridiculous..”

He imitates a woman praying to God as her husband’s actions bother her. “Where does she do it? In front of a stone.. someone sculpted that stone and is relaxing somewhere..she prays her husband should be done away with..God sees her message..’done away with? Who should I do away with?’ he thinks..who sends the message here, who receives it, who is the intermediary? There are mantras, rituals for this..how ridiculous!”.

Apart from the question that if he claims to be an atheist, why would he mock and deride only Hindu beliefs, Ezhilan who has this much hatred for Hindu (Sanatana) Dharma and the beliefs of Hindus, how would he serve the Hindus in his constituency and the state if he gets elected? Not only this, he can also be seen promoting secessionist ideology. It is to be remembered that EV. Ramasamy wanted British rule to continue and called the Independence Day of Bharat as the ‘Black Day’. He also wanted a separate Dravida Nadu from Bharat.

Following in his footsteps, Dr. Ezhilan said in an event where The Hindu newspaper’s chairman N. Ram was also present, that the Tamil people need provocation to start a movement like that of EV. Ramasamy’s self respect movement or Gandhi’s Swaraj movement. He says that Tamils are provoked by “religious fundamentalism, imposition, anti-social justice programs introduced by the centre, and that they are tampering with the constitution, etc”. He goes on to say that such provocation is necessary so that it becomes a detonator and evolves into founding a “United States of India” or a “Republic of South India”.

The question that how can such a person become a part of the very governing structure of Bharat that he wants to destroy, would bother any sane Bharatiya. But it doesn’t seem to have bothered DMK or its head MK.Stalin for they have given him a ticket to contest from the Thousand lights constituency in Chennai.

Even before he gets elected Dr.Ezhilan registered a complaint against his anti-Hindu video on Narayana and Naratha being shared in social media, and the video tweeted by Twitter user @Hlkodo was deleted by Twitter citing copyright issues. If this is how he behaves even when he is not in power what could he do once he is elected? The question has made many worry about what’s awaiting Tamil Nadu if DMK wins these coming elections.

Meanwhile, Hindu organisations such as Hindu Munnani, Hindu Makkal Katchi and some individuals have taken up the task of making Hindus aware of DMK’s viciously anti-Hindu nature, and are campaigning to not vote for parties that insult Sanatana Dharma and its beliefs.