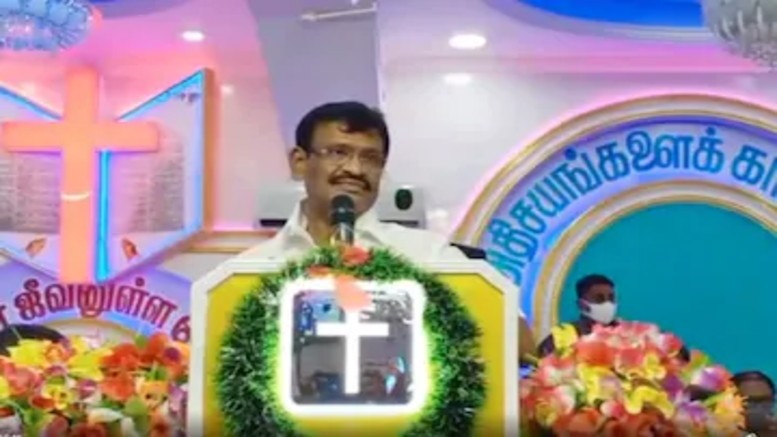 Earlier Catholic priest George Ponnaiah of Kanyakumari had spoken that Hindus won’t vote DMK to power however much the HRCE minister and others try to satisfy them and that DMK’s victory is alms given by the Christian community. He also stoked controversy by saying that he wears shoes as he doesn’t want to catch skin diseases from Bharat Mata and wished gruesome death for Modi and Shah.

Before this controversy could subside, DMK minister and prominent leader I.Periyasamy’s daughter-in-law Mercy spoke in an event organised to condole naxal sympathiser Stanislaus Lourdusamy’s death where she asked for a legislation to prevent Christian priests and nuns from being arrested without prior permission from the Vatican and the pope.

Even as the ramifications of a close relative of a DMK minister speaking like this were being discussed in social media, another controversy has risen through Dairy Development minister SM.Nasar. The minister participated in an event organised by AG Church in Tiruvallur district on the occasion of their prayer tower’s 40th year of establishment.

Pastors from many different denominations attended the event. While speaking there, the minister said that “Those who ruled at the centre and state earlier brought many welfare schemes for the wellbeing of the minority communities. They ruled in such a manner that minorities faced no problems. But in the past 7 years minorities were subjected to many hardships. As an effect of this the current rule will come to an end.”

“Only because of the strength of the  prayers of the Christian community, has there been a change of rule in the state. DMK has come to power thanks to the power of the prayers of Christian community”, he said. Pastors like Paul Dinakaran and Mohan C Lazarus did pray for ousting PM Modi in 2019 Loksabha elections.

While that prayer wasn’t answered their prayer to overthrow the ADMK government in TN was answered thanks to their laity voting en bloc for DMK. One would like to draw attention to the fact that Catholic priest George Ponnaiah also mentioned the same in his speech. He said that he told the DMK candidate of Kanyakumari, Suresh Rajan, that the Catholics and pastors of other denominations would like to campaign for him.

Even though he mocked DMK’s victory no DMK leader spoke about it. Now one of their ministers himself has openly said the same. It explains DMK’s attitude towards Hindus, more virulent than ever before, as they close temples for darshan specifically on festival days, plan to loot temple gold, interfere in temple affairs by appointing women priests, etc. It is to be kept in mind that while Hindus are harassed like this DMK pays back Christians by appointing their clergy in important positions (TNPSC board member and minority commission member).