“The majority (Hindus) are nothing but mosquitoes”: Christian Bishop at event organised by DMK candidate 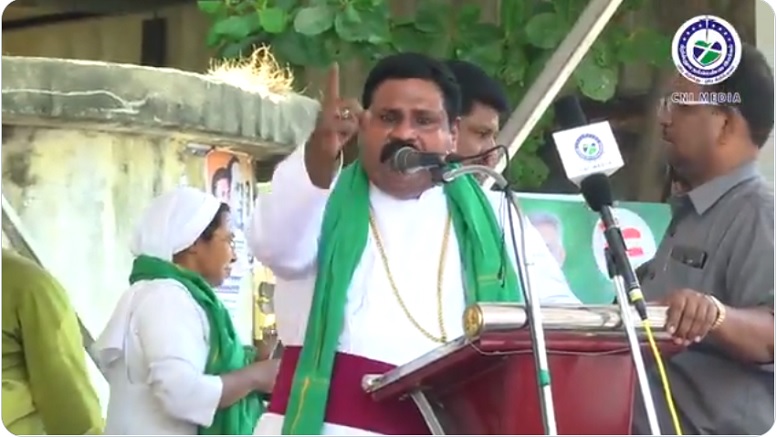 Tamil Nadu’s Christian clergy is openly campaigning for DMK and spreading hatred against Hindus and BJP during the ongoing assembly election. They are batting for Christian and ‘secular’ politicians to come to power and swat Hindus like mosquitoes.

DMK’s Christian leader Inigo Irudayaraj, who also runs Christian Goodwill Movement, is contesting from Trichy East constituency. He often organises events under the banner of this organisation. During one such Christmas celebratory event in which DMK chief and CM candidate MK. Stalin graced the dais, a woman wearing Tripundra tilak who claims to follow Shaiva Siddantha said “I feel like I’m set on fire when I hear the name Hindu” claiming that ‘Hinduism has nothing to do with Tamils’.

An Anglican Church Bishop calls the majority people of this country as a "PEST" that's DMK's achievement in Tamil Nadu, the guy mentioned here Inigo Irudhayaraj is the one who organised Christmas functions for DMK. pic.twitter.com/KsQNCDnQ3f

The Anglican Church (a Protestant Christian denomination) Bishop can be heard saying in the video which has CNI (Church of North India) Media logo:

“How long can you suppress us saying we are a minority? When Christian leaders asked Ambedkar why the Christian community is unable to rise in politics when many leaders from their brother community Islam find popularity, Ambedkar answered that the division of your community into many denominations is preventing your unity which is why there are no prominent leaders from your community. But now all of us have come together. If you keep suppressing us saying we are minority we’ll have to prove that we are actually the majority..(alluding to the fact that converted Christians hide their real identity and numbers).

“National bird peacock is a minority. But it is the mosquito which is the majority….If you are the majority you are mosquitoes to us….if we open our wings you won’t be able to face us.”

In another older event organised apparently before the 2019 LS elections, Inigo Irudayaraj, the DMK candidate, said that Christian pastors advised him to reach out to the Congress leaders in the North to forge an alliance to defeat Modi. He says, “They(BJP) think they can obtain power by doing yagnas. In the 2019 polls both Christian and Muslim brothers will unite to defeat BJP and anyone who supports them which is our only duty.“

Been following this guy Inigo Irudayaraj for a long time Hindu hatred & false propaganda are his greatest strength. Forget about BJP and ADMK, Hindus in DMK must remember that their future generations are finished if they are voting this guy. Tiruchi
pic.twitter.com/dzYKIuL6ae

In the above video which carries the the logo of Christian outfit ‘Power of God’, Irudayaraj adds:

“We should be politicised. From panchayat elections to parliament elections we should contest and take part. We have a 64% strength of population in Kanyakumari. But who is the MP there? It is a man from our enemy party BJP. All our denominations should come together to form a new people’s force. Christians are in majority in Meghalaya, Tripura and Goa. But in all these states BJP is in rule. If our man had won in Kanyakumari constituency would the Enayam port have come? Christians are the majority in Thoothukudi. If our man had won there would the Sterlite factory have come there? It wouldn’t have. The only reason behind this is that we are not politicised.”

There have been many exposes on how the church and its NGO stooges prevent development projects across Bharat, by inciting locals and presenting themselves as social justice warriors and human rights defenders. But now one hears the truth from the horse’s mouth. It’s anyone’s imagination what such Christian politicians will do if they come to power with such an anti-development and bigoted mindset.

Apart from that, another lesson can be learnt from these incidents, as Hindus, despite being the ‘majority’ community of the country, face persecution from anti-Hindu bigots because of our inability to overcome our differences and unite in the face of common enemies.