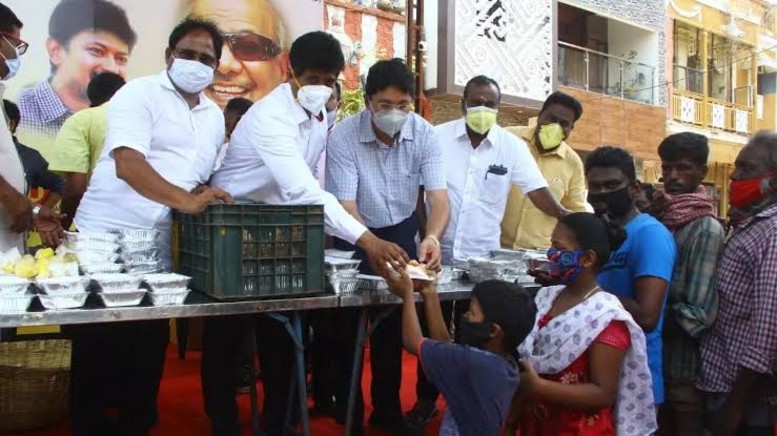 Despite vigorously campaigning that DMK is not an anti-Hindu party, DMK leaders continue to show their Hindu hatred after coming to power. DMK MP Dayanidhi Maran and MLA of Thousand Lights constituency in Chennai were seen distributing mutton and chicken biryani in front of a temple which has sparked outrage.

On June 3rd late CM and DMK leader M.Karunanidhi’s 98th birth anniversary was celebrated across the state. Events were organised by the party to celebrate this occasion. As a part of this, DMK cadre had planned to distribute food parcels. In Royapettah which comes under Thousand Lights constituency, Dr.Ezhilan, MLA and Dayanidhi Maran, MP distributed mutton and chicken biryani in a temple street. Banners and stage were put up exactly in front of the temple’s door, barring entry into the temple. Dr.Ezhilan is a known Hindu hater who mocked Hindus for worshipping ‘stones’ and wearing Vibhuti, Kumkum.

Hindu organisations have condemned this despicable act. Rama Ravi Kumar of Tamil Hindu Party said that if they dare to bar the temple’s door to distribute (non-veg)briyani today, they might as well distribute it inside the temple in the name of Samapanthi (Annadana served to people of all castes to establish equality). He accused the DMK government of going back to their Hindu hatred as soon as they came to power in the arrogance that they gained majority. Many have pointed out that it is not even a month since DMK formed the government and they are already showing their true colors after fooling people by posing with Vel and temple visits during the campaign.