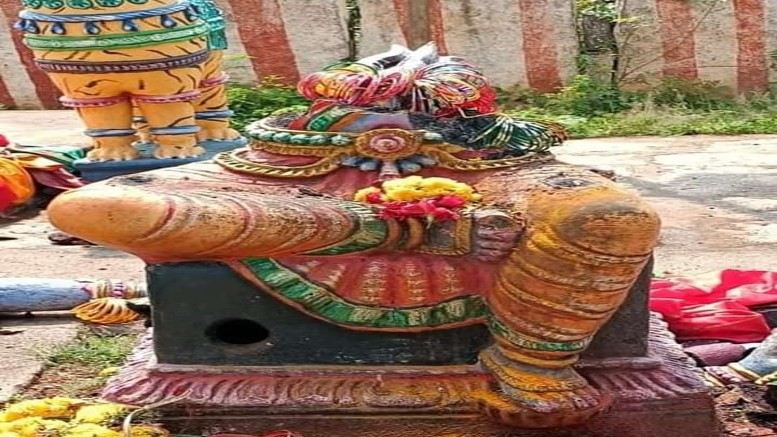 Murtis of Hindu deities were vandalised by anti-Hindu elements in Siruvachur, Tamil Nadu. They were found in a beheaded state with their hands and other parts chopped off. Desecration and demolition of temples and murtis have increased since DMK came to power in May.

The hillocks behind the temple is where Devi is believed to reside on other days. At the foothills there is a temple for parivara devatas like Aiyyanar, Selliamman, Periyasamy, Karuppasamy and Saptha Kannis. Word is that only men are allowed to visit this temple. When some men went to the temple on Mahalaya Amavasya to worship, to their shock they found the murtis in a decapitated state.

Heads, hands and other parts of the murtis were broken by miscreants. Perambalur is a sensitive region in many regards. Recently temple chariots were set on fire by a Muslim in one of the villages in Perambalur. There is a trend of installing Buddha statues in hamlets where SCs are in large numbers. For those who do not know, Thirumavalavan, the chief of VCK, a party that claims to be the champion of ‘Dalits’, has many times claimed that Tamils are not Hindus but Buddhists.

There is a concerted effort to make Tamils believe that the civilization that thrived in the Sangam era was ‘secular’. Claiming that Tamils were Buddhists and converted by the ‘invading Aryans’ is a step towards establishing that as a fact. Thirumavalavan had claimed in the past that prominent temples in Tirupati, Srirangam and Chidambaram were originally Buddha Vihars taken over by Brahmins. He also called for demolishing these Hindu temples and building Buddha Viharas. He had also commented that Hindu temples can be identified by the obscene figurines in their towers.

Now murtis of Hindu deities have been found broken. Devotees have lodged a complaint with the police and police are looking into the issue. Such attacks on Hindu temples have increased after the atheist DMK came to power.

The below are the series of attacks and vandalism in temples after DMK came to power in May.

June 11– Amman murti was vandalised and jewels stolen in Tirunelveli