TN: Amman murtis disrobed and semen ejaculated on them 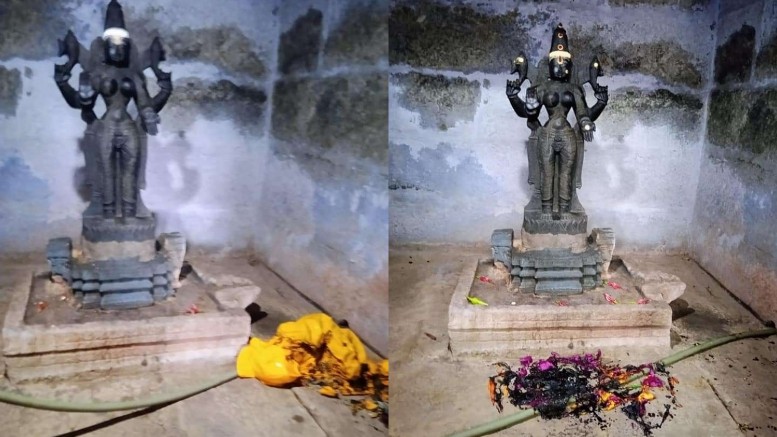 In an absolutely unbelievable turn of events, the deities of a 1,500 year old temple were defiled by miscreants in Ranipet, Tamil Nadu. The murtis of Amman and Durga were found in a disrobed state with semen ejaculated on them. The incident being repeated for the third time has caused widespread outrage against police inaction.

Panchalingeshwara temple in Kondapuram village in Ranipet, Tamil Nadu is a 1,500 year old Shiva temple. It is under HRCE control and Ravi, an archaka, takes care of the daily affairs of the temple. On June 20 when he went to open the temple for darshan in the morning, he was shocked to find the locks of Kamakshi Amman and Durga sannidhis broken.

When he went inside to check more shock awaited him. Both the murtis were disrobed and their sarees were burnt. On the disrobed murtis the archaka found semen ejaculated by some anti-Hindu elements. The temple is located in the outskirts of the village and thus it is difficult to monitor who comes and goes. Hindu Munnani cadres who came to know of the incident have lodged a complaint with the police and staged a protest demanding them to act quickly and catch the culprits.

Allegedly this was the third time that such a despicable act was done. Activists allege that even though people of all communities live around the temple, there are some neo converts and members of the VCK party as well. It was VCK chief Thirumavalavan who organised a conference ‘Uproot Sanatana Dharma’ of which DMK was also a part. Thirumavalavan had also called for the demolition of Hindu temples like Chidambaram claiming that they were Buddhist temples earlier.

Hindu Munnani has accused the HRCE official responsible for the temple of willful negligence. Not only no proper security facilities are provided for the temple, the official didn’t even visit the temple in the aftermath of such an outrageous event. In 2019 in a similar incident, a Muslim youth had exhibited sexual perversion towards murtis of rishi patnis in Thanjavur art gallery. A week ago 9 temples in Coimbatore were demolished by the authorities in the name of removing encroachments. Last month murtis in a Chola era temple were beheaded and hands of Amman murtis in another temple were chopped off.

Continuing incidents of temple vandalism has caused worry among the Hindu community and activists blame it on the anti-Hindu DMK government. It isn’t to be forgotten that a catholic pastor George Ponnaiah degraded Bhooma devi and dared Hindus to try and stop Christians from growing. Even though it was made to look like he was going to be arrested and punished for his speech he was admitted to a hospital on the pretext that he has health issues and is old.