As social media rages about media discriminating against Hindu victims when it becomes obvious that the culprits are from Samuday Vishesh (special community, i.e. Muslims), an FB post has emerged which again highlights the need for urgent reform within Muslim society when it comes to respecting women and other cultures.

A pervert, supposedly named Muji Rahman from Madurai, as per his Facebook page appears to have posted a few very objectionable and obscene pictures clicked with some sculptures from the Thanjavur palace Art Gallery.

There are four pictures in which the guy could be seen kissing and putting his hands around the shoulder of the sculptures of women obscenely. He wishes his followers Eid Mubarak in the FB post and posses with the great Brihadeshwara temple’s tower in the backdrop.

The women statues are of two of the seven Rishi patnis. The photo of him kissing the patni statue is posted with the comment ” What could this woman have told to this?”. For the picture where he is seen putting his hands around the shoulder of the sculptures in an obscene way touching private parts, he comments “Put on a duppatta, lady friend”.

How deprived and twisted could this being be to have treated the statutes of women in such a defiling way? Based on the religion of the person, it makes one wonder if it has to do with the teachings of his religion that he treats non-burqa clad women like sex objects? 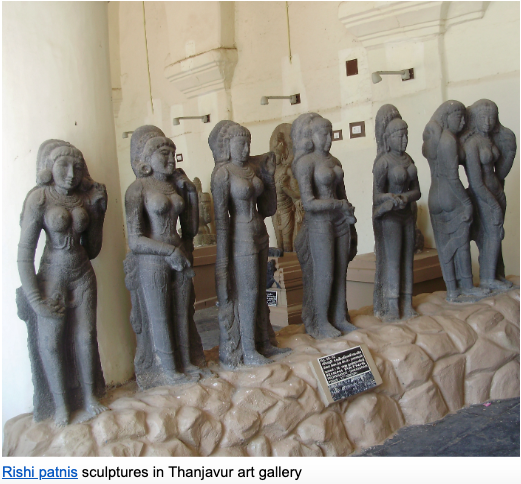 Liberals would suggest ignoring such comments, but those of us who don’t live in posh societies and have to face the brunt of such indoctrinated minds can’t afford to shrug it off. The religious doctrines which permit ‘marrying’ a 9-year-old girl and raping kafir women or treating them as sex slaves, definitely play a part in this uncouth behaviour.

If a Muslim treats even sculptures of women in such a defiling manner, no wonder we get daily news of them sexually assaulting Hindu girls & women. What is more, the sculptures that the man defiled were of the Rishi patnis. Even if he doesn’t know who the Rishi patnis are, he would definitely know the meaning of the word ‘patni’ as it is widely used in Tamil. His comments suggest that he did it purposefully to mock the values of Hindus.

These posts have now been deleted by the culprit from his FB page. His profile says he is a women specialist doctor. It makes one worry how dangerous he could be to his female patients if it’s true. With Muslim demography growing by the day, and illegal immigrants from Bangladesh and Rohingyas being settled from Kashmir to Kanyakumari, the safety of non-Muslim girls and women becomes fragile and worrisome unless Muslim attitudes towards women, and non-Muslim women in particular, undergo a major reform.

Such incidents of revered statues being defiled will only raise more divisions in society. If even stone sculptures are not spared, we better start teaching our children self defence.

Latest news is that Mujibur Rahman has been apprehended by Trichy police from where he was staying with his sister and jailed in Trichy central prison.