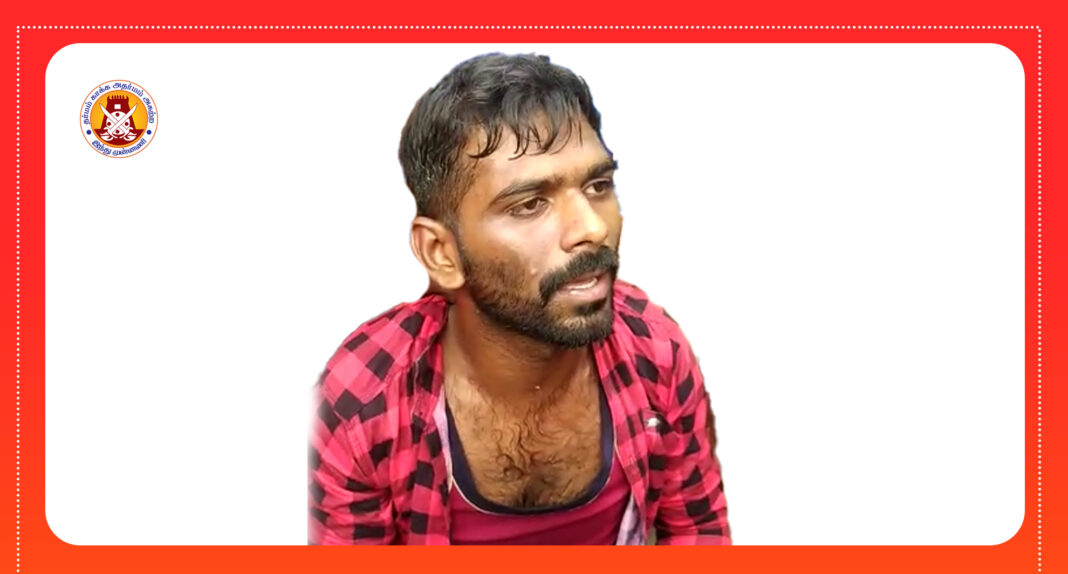 After opposing the temple chariot festival, Muslims of a village in Perambalur have tried to set ablaze the chariot recently. Even though the perpetrator himself has admitted to setting the chariot on fire, police are allegedly trying to protect the man by branding him as mentally ill.

Two chariots belonging to Dharmapureeswarar temple in V.Kalathur, Perambalur in Tamil Nadu were on fire on September 26. Shocked villagers hurried to douse the fire and caught one Mohammed Saleem. He had broken the locks of the chariot shed and set them on fire in broad daylight. Villagers caught him red-handed and inquired the reasons behind his atrocious act.

The video of the man admitting that he set the chariots on fire has gone viral in social media. When asked why he did it he says, “Just for the sake of it! I wanted to see what was inside. It has been locked up for 2 years. Court has ordered that it shouldn’t be opened. I wanted to see what’s inside. If you let me now, I will set it on fire again”.

He speaks perfectly well and clearly identifies himself. When people asked for his phone he could be heard saying, “You cannot open it. My fingerprints won’t open it. Hand it and myself over to the police. Where is the police? Call them”. Villagers handed him over to the police and filed a case against him. However Hindu activists allege that despite his open and clear admission, police are trying to close the case by branding Mohammed Saleem as a mentally unstable person.

Hindus of the village have been facing trouble from the Muslim community from as earlier as 1951 in conducting temple festivals and utsavs. The Hindu community has been using the little land parcel of 0.31 ha in the village to park the temple chariots. This land was used by Muslims as well from time to time for religious and community events. But now they object to it being used by Hindus and want to build public toilets there.

Initially there were scuffles over the usage of the land but they were resolved at the local level. But the Muslim youth are said to have been influenced by radical Islamist organisations like PFI. Palani Baba, a notorious Islamist is said to have mocked Muslims who agreed to attend peace talks with the Hindus and even provoked them to burn the chariot. Hindus, concerned, wrote a petition to CM’s special cell seeking to provide protection for the chariots.

In bitterness, Muslims objected to the chariots passing through Raja Veedhi(Raj Path) where they live in majority. They also went to court against conducting the chariot festival in 2012 but the petition was dismissed by the court. After that festivals were conducted but without vedic chants and devotional music reverberating through speakers, colourful lights and flowers and folk music, all of which are important parts of Hindu festivals.

Yet Muslims couldn’t tolerate it and went to court again seeking to ban the festivals. Muslims objected to ‘Hindu festivals terming them as Sins and contending that the areas were dominated by the Muslim population’. In May, the court ruled that the festivals should be conducted following the age-old customs and Muslims have no business dictating what Hindus should or shouldn’t do. A detailed history of what Hindus went through can be read here.

However due to Covid-19 restrictions most of the Hindu festivals were not conducted for the past 2 years. The chariots haven’t rolled on the streets since March, 2020. So the temple chariots of V.Kalathur have been locked up for 2 years now. The current incident seems to be inspired by Palani Baba’s speech and PFI’s infiltration.

As per a report prepared by a fact finding committee in 2013 the village had a population of 10,750 out of which 5600 were Hindus and 5150 were Muslims. It could have drastically changed now and the incident is a reflection of that. With DMK coming back to power, perhaps Hindus should prepare themselves for Andhra style chariot burning, murti breaking scenario in TN.