Pakistani cleric reveals the end goal of Islam : must listen for all non-Muslims 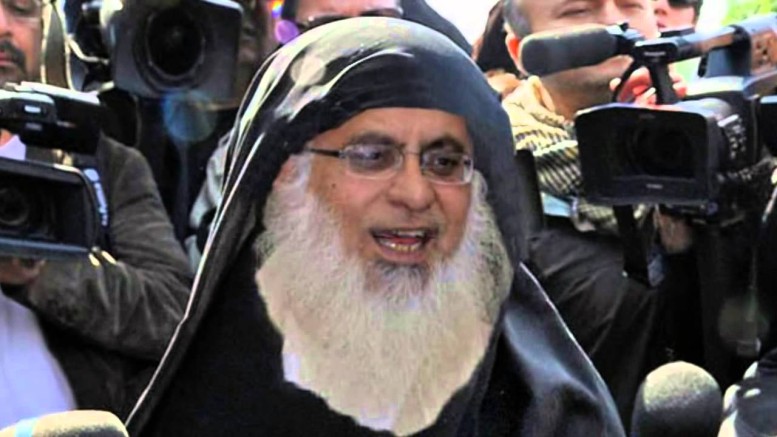 In the posh area of Islamabad, the capital of Pakistan, is situated a mosque known as Lal Masjid. It is most well known for a 2007 military operation by the then Parvez Musharraf government in which 100s of terrorists within the mosque were killed. An undated audio of the head of Lal Masjid has been recently released in which he can be seen revealing the end goal of Islam and Islamists. We have added explanatory comments in italics and put major ideas in bold.

The audio released by UNewsTV has a person asking the Maulana, named Abdul Aziz “When you do this dawah/dawat (converting people to Islam), what is your mission…your goal?” To this Abdul Aziz replies

Who is Maulana Abdul Aziz?

One might be tempted to dismiss this as rant of a fringe extremist in Pakistan, but we would not be entirely correct in assuming so. An ardent supporter of Taliban and Al Qaeda, Aziz was banned from the Lal Masjid after the 2007 conflict for a few years but was soon back in the mosque in 2009. He was again banned in 2014 from the mosque when he supported the bomb blast in the Army Public School, Peshawar. However, in 2020 he not only stormed the mosque and took possession again but also forced Imran Khan government to give him two large plots for a new madarsa, Rs. 25 crores and reinstatement as leader of Lal Masjid.

It is important to know why Pakistan government lets Abdul Aziz run his activities from the oldest and second largest mosque in Pakistan’s capital. Since 1970s, the Pakistani establishment has pursued a policy of Islamisation and covert war. Aziz’s father was a good friend of dictator Zia ul Haq and in 1970s and 1980s, sent thousands of his students to Afghanistan to fight as mujahiddin(the proper word for jihadis). After the assassination of his father, he and his brother assumed the responsibility for training jihadis. His brother was killed in the 2007 conflict with Pakistan army. Abdul Aziz was caught in 2007 while trying to run away hiding in a burka and since then has also been called Mullah Burqa. Immidiately after this, there was an uprising in his support in Waziristan and it could be quelled only after hundreds of Pakistan army soldiers were dead.

It goes without saying that Imran Khan and PMs before him bent their knee before Aziz because he has backers in the real powers that be in Pakistan. With the recent takeover of Talban in Afghanistan, his position has been strengthened further. In September, he raised the flag of Taliban in Islamabad and the authorities, despite disagreeing, could do nothing. Curiously, Aziz enjoys good relations with the Afghan Taliban as well as with the Pakistani Taliban(TTP) which are often in conflict.

Not a fringe opinion

Non Muslims, specially Dharmiks might be shocked by hearing this, but this has never been a fringe opinion. Since the times of Muhammad, the prophet of Muslims, converting others to Islam has been one of the foremost duties of a Muslim. As mentioned by Maulana Abdul Aziz, the justification comes directly from the religious books of Muslims. From the Sufi “saints” like Muinuddin Chisti to fanatic rulers like Aurangzeb and Tipu Sultan, all have had this goal in mind and done their bit.

Incidentally, Bharat and Hindus stand in way of not only this Islamic goal, but also the Christian goal of making the whole world Christian. This resistance however, needs express and sustained support of the government to the Hindus. That is how any Hindus survived last 1000 years, and that is how Islam and Christianity spread and continue to do so.