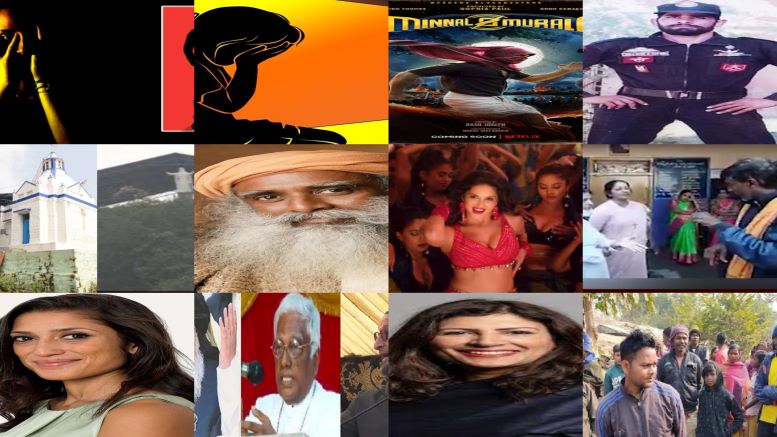 In this weekly summary for the period from 26 December 2021 to 01 January 2022, we hope to provide a snapshot of such crimes and hopefully awaken more people around the world to this human rights crisis:

1) A case of a Catholic church encroaching forest land on top of a hillock in Tiruvannamalai, Tamil Nadu has come to the fore. The church has encroached 5 acres that belong to the government. Tiruvannamalai district collector who found out about it recently has ordered its eviction.

2) Sikh Labour party MP from the United Kingdom (UK) Preet Kaur Gill hurt the sentiments of Hindus by labeling the victim of the Golden Temple lynching ‘Hindu terrorist’ in a tweet that she was subsequently forced to delete after outrage at this blatant attempt to deliberately tag Bharat’s majority community without any basis.

3) Sadhguru Jaggi Vasudev has reportedly downplayed the anti-Hindu pogrom in neighboring Bangladesh during Durga Puja triggered by a fabricated blasphemy incident. If the reports are correct, then Sadhguru certainly has erred as have the Bharatiya government and diplomats by labeling the pogrom as a ‘small incident’.

4) A police constable has been booked for allegedly sexually assaulting and exploiting a 26-year-old grooming jihad survivor in Uttar Pradesh.

5) Minnal Murali is being applauded as the best Bharatiya superhero movie of 2021, but the movie, directed by Basil Joseph, is laden with subtle symbolism that creates hate for Hindus.

6) A remixed version of the song ‘Madhuban mein Radhika naache’ from the 1960 film Kohinoor featuring Sunny Leone has been released by music company SaReGaMaPa. The party number where Leone is seen obscenely gyrating to the lyrics of a Hindu bhajan on the divine love between Bhagwan Krishna and Radha has earned the ire of netizens.

7) Karnataka police have taken six boys into custody for the gang rape of a 17-year-old girl after they blackmailed her of making her private video viral in the Dharwad district.

8) The increase in Christian evangelical activities in Punjab has been highlighted time and again. The confirmation for the same now comes from a member of the Indian-American Christian group who glorified the growth in conversions and the rise in the number of Churches across North and Central Bharat in general and Punjab in particular.

9) Nirmala English High School, a government-aided school run under the aegis of an International Christian Missionary organization named Salesian Missionaries of Mary Immaculate (SMMI) and located in Karnataka’s Mandya district, has been accused by parents of its Hindu students of forcibly imposing Christianity on its non-Christian students. On the basis of a complaint filed by LRPF (Legal Rights Protection Forum), an organization fighting for the rights of indigenous populations, NCPCR (National Commission for Protection of Child Rights) has taken cognizance of the issue.

10) The discourse is skewed and Hindus are facing asymmetric information warfare. Our enemies have honed their narrative skills for centuries, and Hindus are just beginning to wake up from a secularism-induced stupor. In this article, we are sharing a compilation of hate speeches inciting violence against Hindus, denigrating Hindu Dharma and Hindu deities, erasing Hindu identity, or threatening to cripple and partition Bharat (again).

11) Unable to bear the thought of PM Modi inaugurating the renovated Kashi Vishwanath temple corridor and the temple receiving the due attention it deserves, a Moulana has peddled the worst of lies about the temple. One Moulana Shamsuddin Qasimi from Tamil Nadu has claimed in one of the videos posted in his Youtube channel that a Hindu queen was raped inside the temple by the head pujari. He also claimed that Aurangzeb demolished the temple only because Hindu kings and seers requested him to, following the “rape incident”.

12) Members of the Hindu Sarna faith in Jharkhand’s Gumla District are being terrorized by the Christian conversion mafia and are being threatened with dire consequences if they don’t accede to the demands of the missionaries.

13) Three youth belonging to the Muslim community abducted a college student, gang-raped her, and after she became unconscious, dropped her near a local school and fled. The appalling incident took place in Sitalkuchi in West Bengal’s Cooch Behar district. Later, based on the complaint of the victim, Sitalkuchi police had arrested Jamir Miyan as one of the accused in this case. But the other two accused, namely Firoz Miyan and Russell Miyan were on the loose.

14) Madhya Pradesh Police on Sunday, December 26, arrested three people including a catholic priest and a pastor in the Jhabua district after vanvasis (tribals) complained that they were being lured to convert to Christianity in exchange for medical and education benefits. In another case, one Javed Khan was booked in Ashok Nagar district on December 25 for tricking a vanvasi woman into relation by assuming a Hindu identity and forcing her to convert to Islam after the birth of their child.

15) Kerala police suspended PK Anas after it was found that the special police officer was leaking information about RSS workers to the Popular Front of India (PFI). He was handing over details that included addresses, family member details, and exact locations of citizens that Kerala Police themselves had collected as part of a plan to protect them.

16) The ‘secular’ Uddhav Thackeray government has hit a new low by having Kargil war hero Digendra Kumar booked for ‘hate speech’ along with five others. A suo moto case was registered by the Pune Police on December 28 for supposedly communally charged speeches during the Shiv Pratap Din held on December 19 to celebrate the victory of Chhatrapati Shivaji Maharaj over Afzal Khan.

17) Hindus have arguably suffered far more than Jews yet an entire movie industry, consisting primarily of Hindus (at least in the name) continues to gaslight the community that the existential threat they face – the pogroms, forced conversions, exoduses, sexual violence, and grooming jihad, land grabs, hate speech – is all a figment of imagination, is just a ‘conspiracy theory’ cooked up by ‘extremists’. The real threat, we are told, is posed by ‘intolerant’ Hindus to minorities, Dalits, and women. Atrangi Re is just the latest manifestation of this phenomenon.

18) A couple of RSS activists were beaten by a Muslim mob after they stopped them Muslim youths from drinking liquor near a temple and creating a ruckus. While Vikas Gupta and Shivam Kumar were injured, the mob also indulged in stone-pelting on the RSS office. 10 persons have been arrested for the crime while the investigation is going on.

1) A Hindu woman was abducted in broad daylight outside the Session Court in Umarkot, in Sindh Province of Pakistan. BJP leader Manjinder Singh Sirsa shared a video about this incident on Twitter. In this Tweet, he has tagged External Affairs Minister S Jaishankar and Pakistan PM Imran Khan. When this woman was abducted; she asked for help from the people who were present there, yet, no one came forward to help her.

1) On 26 December 2021, at night a Hindu local leader Kalipada Roy’s home, temple, and businesses institutions came under attack. More than 4 shops and a temple were burnt, destroyed at Begunbari ward no. 19 in Tagorgaon Sadar.

2) On 26 December 2021, during the local election at Potiya, Coxbazar Hindus were attacked. They were brutally & mercilessly beaten at Dhalaghat, ward no. 08 in Coxbazar’s Potiya P. S.

1) The Hindu community vis-a-vis Covid is being exploited by institutions that are supposed to serve and protect its welfare. Worse is the inability of Hindus to be objective, that is, to remove the rose-colored lenses and acknowledge reality. Hindu families who are victims of Covid have to fork out huge sums of money, beginning at $17,000 for cremation and running to as high as $25,000. Many of them opt for funeral agencies that the families have been using in the past, unaware that the said services are available for $12,000.