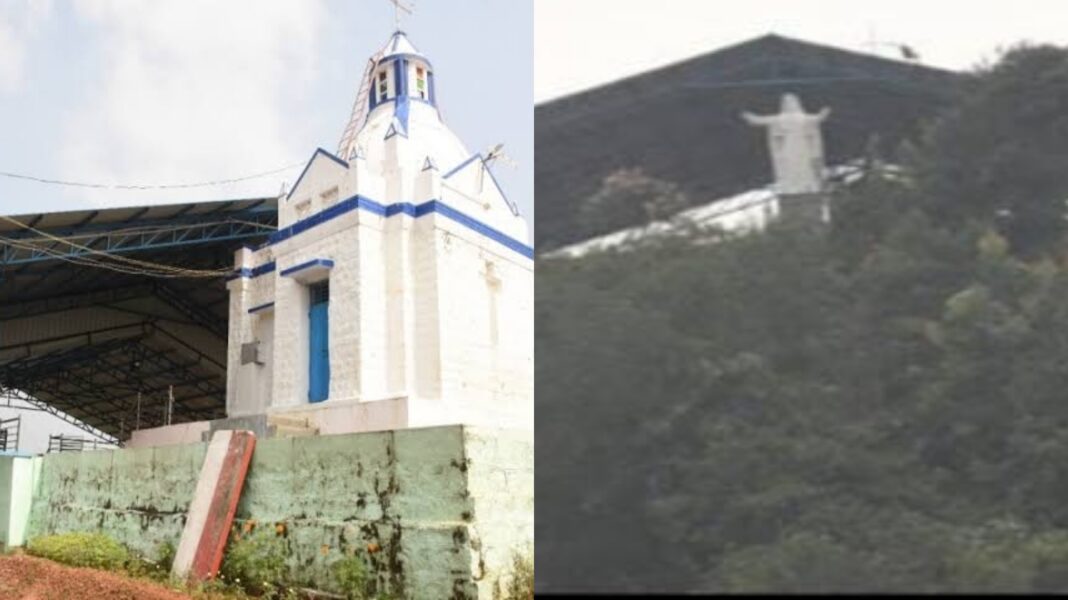 A case of Catholic church encroaching forest land on top of a hillock in Tiruvannamalai, Tamil Nadu has come to fore. The church has encroached 5 acres which belongs to the government. Tiruvannamalai district collector who found out about it recently has ordered for its eviction.

The district collector had gone to the hilloc to plant saplings as a part of afforestation drive and to his shock found that 5 acres of land had been leveled atop the hillock and construction activities were going on. It all started with a Cross as is the norm. Some people of Ilayankanni village at the foothill of the hillock, are said to have planted a cross at the top in 1961 at the behest of the church. Later a proper church was built in 1982.

After that construction activities continued to make the church easily accessible and in 2014 reportedly part of the hillock was drilled and leveled to lay a road. A parking lot was also built by leveling 5 acre land at the top. It is alleged that 3 months back with DMK MLA as chief guest, foundation was laid to construct an asphalt road. The collector had visited the hillock and the surrounding areas when a tree planting drive was organised.

Apparently he was shocked at the blatant attempt to encroach the hill and ordered an investigation into it. Revenue and panchayat officials found that the land encroached by the church is documented as government land and that it had not been transferred to anyone. In a similar manner another hillock in the adjacent village, Saveriarpalayam which comes under the newly carved district Kallakurichi, has also been encroached. The concerned church, ALC Carmel Church operates under the Roman Catholic Diocese of Vellore.

Hindu Munnani has petitioned the district collector to look into the matter of mushrooming illegal churches and prayer halls in the district. Missionaries are said to target the diseased and convert them in the pretext of providing medical help. The petition mentions a few examples of missionaries obtaining permission to build houses but constructing prayer halls instead and encroaching small hillocks by placing small religious figurines and converting them into prayer halls later. Tiruvannamalai district collector had ordered to issue notice to evict the encroachments on the hilltop except the church. The church is allegedly using the villagers as a shield to prevent action.

This is not the first time the church has encroached hills. The Malai Mazhai Matha church encroaching the hillock in Acharapakkam, Chennai has not even been properly surveyed even after the Madras High Court’s directions to do so. The Catholic church has encroached the whole hillock making even the millenia old Pasupatheeswarar temple at the top inaccessible. The greeneries have been totally razed to lay roads and inscribe “Ave Maria” on the hillock.

The hillock is said to have archeological mounds of historical importance as well. Yet the church had the audacity to plunder the land without getting customary permission from any of the departments. Hindu organisations had filed a PIL against the church and the court had directed the government survey the property to ascertain the facts.

Yet no action has been taken so far. It is no wonder considering the fact that government officials oftentimes work in the favour of missionaries. Recently Madras HC slammed a Tehsildar and Revenue Officer for siding with a pastor who encroached government land saying people had no problem with the church.