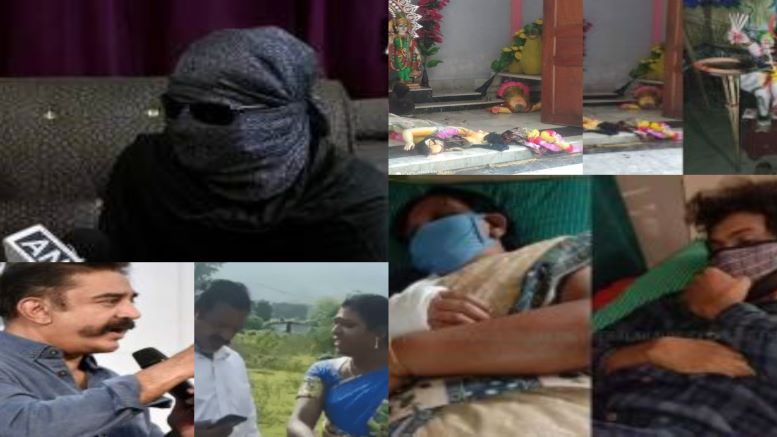 In this weekly summary for the period from 20 to 26 December 2020, we hope to provide a snapshot of such crimes and hopefully awaken more people around the world to this human rights crisis:

1) A group of four people comprising of 3 women and a man including a South Korean national was arrested by the Noida police for attempting to lure people to Christianity. The Christian conversion mafia is actively attempting to convert Hindus and therefore evangelism and proselytization are on the rise across Bharat.

2) In yet another illustration of the cultural illiteracy or selective malice that the secular Indian state suffers from, a painful video has emerged from Odisha. The video shows government authorities in Bhubaneshwar, Odisha demolishing Gopal Tritha Matha, a Hindu monastery, as part of the ongoing ‘beautification’ drive in the vicinity of the Lingaraj temple.

3) A video of NCP Nagpur City Minority Department President Arbaaz Khan went viral recently in which he is seen threatening and abusing Hindus. In addition to using extremely vulgar and derogatory language in the video Khan has also displayed arrogance by sharing his residential address and daring Hindus to act against him if they have the guts to do so. Khan apologized after Hindu groups took up his challenge and responded with equal zest.

4) A video showing the newly elected CPM (Communist Party of India – Marxist) councilor of Haripad S Krishnakumar threatening to segregate citizens of his constituency on the basis of their loyalty to CPM has gone viral on social media. He is threatening those who didn’t vote for CPM (read Hindus) as second and third-class citizens whose requests will not be considered.

5) Christian evangelists are now thronging temples and Hindu holy places to proselytize. However, the Hindus have now started fighting back the conversion mafia. Recently, a group of transgender women chased away a missionary proselytizing in a temple. In the video, transgender women can be seen surrounding and cursing a man. The man is alleged to have stood in front of Bokkapuram Mari Amman temple in Nilgiris, Tamilnadu, preaching the gospel to devotees entering and leaving the temple.

6) A girl, Asha (21), was attacked with a machete by her ex-boyfriend Ismail (25) in broad daylight while walking to the jewelry shop where she works in Hubballi (Hubli), Dharwad district, Karnataka. The incident occurred around 10 AM on Monday morning in Deshpande Nagar.

7) A case of reverse love grooming terror was reported from Kerala where Islamists attacked a Hindu boy Abhinanth and his mother Lekha for refusing to embrace Islam after having married a Muslim girl. As per reports, the attackers have broken Lekha’s hand while Abhinanth received a head injury after being attacked with an iron rod. The two are now receiving treatment at Aluva’s Karothukuzhi Hospital.

8) A known rabid Hindu hater, actor-turned-politician Kamal Haasan recently insulted Hindu temple traditions by turning down the poorna kumbham honor offered by the poojaris. He displayed his Hindudvesh (contempt for Hindus) when he refused to accept the Poorna Kumbham (an honor) offered by the priests of Kumarakotam Murugan Koil.

9) The Uttar Pradesh police are working strictly under the newly formulated anti-conversion law. They have arrested over a dozen people for converting a woman to Islam for marriage and three for using undue influence and other illegal means to convince people to accept Christianity. So far, 14 arrested in Etah for the forcible conversion of a girl to Islam for marriage, 3 in Azamgarh for illegal Christian proselytization under UP’s anti-conversion law.

10) A 13-year-old girl who was working in the fields with her grandmother was dragged away and gang-raped on Saturday by 4 Muslim youths from a neighboring village in Garhmukteshwar tehsil, Hapur district, UP.

11) Christian missionaries who were proselytizing and indulging in conversion activities at the Perunthalaiyur Bhavani river near the Shiva Mandir located at Erode District’s Appakudal Town were confronted and chased away by Hindus. In recent times, proselytization by evangelical missionaries is on the rise but Hindus have also woken up to this and are increasingly confronting these missionaries.

12) After refusing to accept poorna kumbham offered by temple priests as a token of respect, actor turned politician Kamal Hassan has made a controversial remark about Hindu deities’ vigrahas now. Hassan, in a recent political meetings-cum-campaign for the upcoming assembly elections, spoke about women empowerment. He started off saying the main issue women face today is sexual harassment and rape. He said that males try to blame it on women by saying that “women dress provocatively” and that men force themselves upon women even though they know the boundaries and they cross them intentionally.

13) Muslim criminals are assuming Hindu identity to dupe the public. The Delhi police have arrested a Muslim occult practitioner from Meerut who duped several people using a web portal by pretending to be a Hindu Pandit and then interacting with his potential targets over the phone before asking them to deposit money in his account for easing their domestic problems.

14) A Hindu woman from Delhi has said she was forced to convert after getting married to a Muslim man who pretended to be a Hindu while living in her house as a tenant. In the complaint registered at Sarita Vihar police station, she said, “His family forced me to change my religion to Islam. I was forced to wear a burqa, offer namaz. His father too tried to sexually harass me.”

15) A video from last year has surfaced in which Nand Baghel, father of Chattisgarh Congress CM Bhupesh Baghel, is seen spewing venom against Hindus. The senior Baghel was delivering a speech at Delhi’s Constitution Club demanding increased reservation for backward classes.

16) A 12-year-old Bengaluru girl was found to have been sexually harassed by the watchman of the children’s orphanage she lived in. Watchman, Devendran, 40 was arrested by women police as they found the allegations of the girl to be true. The welfare of Children’s Home located in Pothur near Chennai is being run by Teni and Thomas, a married couple.

1) A Hindu youth Dev Ji son of one Baro Kohli is found dead hanging by the neck in Chak Number 57, Golarchi, Sanghar, Sindh-Pakistan.
2) Several including a child were killed when a bomb exploded near the homes of the Hindu Kohli community in village Morhadi, Khipro, Sanghar Sindh-Pakistan on December 22. The injured were taken to Government tehsil hospital Khipro, Sanghar.

3) The Islamic State of Pakistan never gives anything to Non-Muslims but always snatches by one way or another. Even common Muslims consider looting properties of Non-Muslims as their religious right. Hindus beaten, forced to leave their properties in Goth Bogh Bheel, Pungario, Badin-Sindh said in an interview.

1) In yet more attacks on Hindu temples in Bangladesh, a Radha Govinda mandir in Nawabganj was desecrated, the murtis burnt and gold ornaments looted on Sunday night, as per local media reports. Shri Gopal Pal, the in charge of the temple, informed that on Monday morning the local devotees first noticed the broken murtis of Gour Nitai and the burnt murti of Radha Krishna.

2) A Hindu family was brutally attacked injuring six people in Shamnagar P.S, Shatkira district. The attackers have been identified as Mohammad Alamin, Akter, and Dulu.

3) A Hindu temple in Dhaka district’s Nababganj was vandalized by local Muslim miscreants who looted the temple as well.

4) A Hindu family residing at Chittagong’s Sadar was brutally assaulted by local Muslims.

6) A Hindu girl Silpi Rani Shel was forcibly converted to Islam by local Muslims at Sadar in Potoyakhali District.