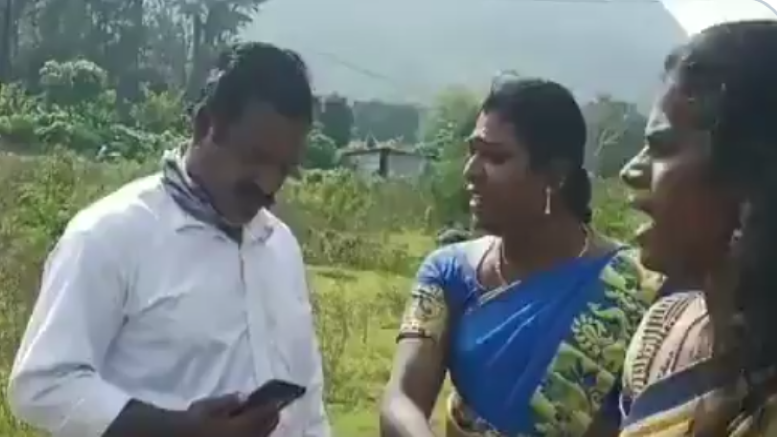 Social media is abuzz with the video of transgender women chasing away a missionary proselytizing in a temple. In the video, transgender women can be seen surrounding and cursing a man. The man is alleged to have stood in front of Bokkapuram Mari Amman temple in Nilgiris, Tamilnadu, preaching the gospel to devotees entering and leaving the temple.

The temple was found by the indigenous people, Kurumbas, of the mountains and is famous for its car festival. People from all walks of life from everywhere throng the mountains on the occasion of the festival. As temples have been opened after a long time due to Covid-19 induced lockdown, Hindus have been visiting temples despite the restrictions imposed. Likewise, Bokkapuram Mari Amman temple also saw a lot of devotees thronging its premises among whom were the transgender women.

These persons on seeing the pastor preaching the gospel and denouncing Hindu gods at the temple entrance started cursing him for his nonchalant behavior. They can be seen saying, “You sure have the audacity to come and proselytize in a temple. How dare you? Where did you come from? How many of you are here like this?” they ask. They also warn him to not touch him and enquire whether he is intoxicated.

One of the transgender women tells him that she was a Christian earlier and believing in Christ has only brought her to the street. He is rightly admonished for taking a disrespectful tone with them. The man closes his eyes and appears to be praying which is mocked by the people.

“He can pray however much he wants. Jesus will only leave us in the street through his prayers” the ex-believer says. They also suggest that he should take up some other ‘business’ than doing such a despicable job. “Did anyone ask you to pray in a temple? Is the temple the place to pay for you? Why don’t you limit it to the church?”

“You did it on the streets; you came to our houses; we let you be..but now you’re setting shop in the temple itself. How audacious should you be? You come to preach about Jesus when there are so many people. Do you understand what could happen to you if all of us unite? Do you have any sense? Who are you calling? Let me call the Sub Inspector and complain about you first” the ex-believer transgender woman says.

The episode has brought out evangelists’ attitude towards temples and the reality of equality and social justice in Christianity. The transgender women have won hearts through their confrontation and proved the inclusiveness of Sanatana Dharma.