14 arrested in Etah for forcible conversion of a girl to Islam for marriage, 3 in Azamgarh for illegal Christian proselytisation under UP’s anti-conversion law 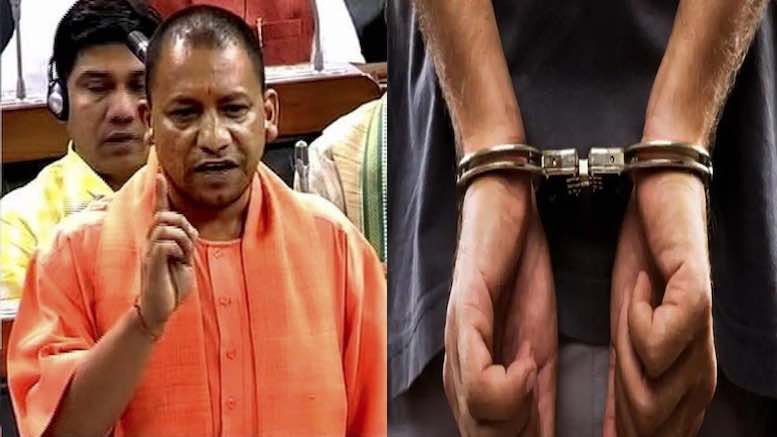 The Uttar Pradesh police is working strictly under the newly formulated anti-conversion law. They have arrested over a dozen people for converting a woman to Islam for marriage and three for using undue influence and other illegal means to convince people to accept Christianity.

In Etah, the police arrested eight people on the charge of forcible conversion of a 21-year-old girl and then getting her married.

In Azamgarh, three other people were arrested for converting Hindus to Christianity – the new state law prohibits misrepresentation, undue influence or any fraudulent means for conversion.

The case under the new anti-conversion law was filed on Thursday in Jalesar in Etah on the basis of a complaint filed by the woman’s father, a businessman. The woman was compelled to convert for marriage by one Javed, who runs a cloth shop and is a neighbour of the woman.

Deputy Superintendent of Police Ram Niwas Singh said, “Fourteen people, including the eight on Tuesday, have been arrested so far. Three police teams are trying to find the woman, and arrest the absconder.”

According to the police, the woman has been missing since November 17. But her family filed a case last Thursday when they received a letter from Javed’s lawyer, informing them about the woman’s conversion and the subsequent marriage in a court.

The case was registered under IPC section 366 (kidnapping, abducting or inducing woman to compel her for marriage) and under the Uttar Pradesh Prohibition of Unlawful Conversion of Religion Ordinance, 2020.

Javed is on the run after being accused of kidnapping and unlawfully converting a Hindu woman to Islam for the purpose of marriage, while eight of his relatives were booked and arrested on Tuesday.

According to the Etah police statement, the eight accused, including a woman, were arrested from near the Agra crossing. Police believed that the woman was somewhere in Delhi, while Javed was still in Uttar Pradesh, constantly changing his location.

“Javed and his four close relatives are still absconding,” a police officer said, adding that they will also be arrested soon. A reward of Rs 25,000 on each of the five men has also been announced.

In Azamgarh, the police have arrested Balchandra, Gopal Prajapati and Neeraj Kumar for organizing a meeting and convincing people to convert to Christianity.

Deedarganj station house officer Sanjay Kumar Singh said that the three men came to the village and allegedly organised a meeting at Tribhuvan Yadav’s home to convert people to Christianity.

A villager, Ashok Yadav, informed police following which the arrests were made under the Uttar Pradesh Prohibition of Unlawful Conversion of Religion Ordinance, 2020, he said.

The ordinance mainly envisages that no person shall convert, either directly or indirectly from one religion to another by use or practice of misrepresentation, force, undue influence, coercion, allurement or by any fraudulent means or by marriage nor shall any person abet, convince or conspire such conversion.

If it is proving effective, why is the new law being derided and demonised by MSM?

Grooming of Hindu girls by Muslims, many of whom are radicalised by Muslim clerics into regarding non-Muslim girls as ‘loose’ or legitimate targets for conversion to further their religion, is rampant, especially in UP. Hindi news reports are full of such cases and the term ‘Love Jihad’ has been coined to describe this phenomenon.

But for English-speaking left-liberals, acknowledging the existence of this harsh reality is anathema to their worldview in which ‘minority’ Muslims can only be the victims of majority Hindus’ ‘othering’ and ‘bigotry’. Their response has been simple – dismiss grooming of non-Muslim girls or ‘Love Jihad’ as a bogey.

They cherry-pick the odd case in which some Hindu group indulges in loose talk or targets a genuine inter-faith couple, i.e. one where no conversion is involved and/or both parties are mature adults fully aware of the socio-religious practises and personal laws of each other’s communities.

The new law’s provision that couples where one of them is converting to the other’s religion must apply two months in advance to the DM (District Magistrate) and prove that the conversion is not being done solely for purpose of marriage is also important. It ensures that the converting party fully understands the tenets of the new religion and more importantly, the personal law regime that will govern the marriage. This provision will also encourage such couples to tie the knot under SMA (Special Marriage Act), a good development for those desirous of genuine inter-faith marriages, as liberals claim to be.

As for the provisions of the new law against illegal conversion of Hindus into Christianity, that has been lost in the whole din of articles and op-eds obsessed with denouncing this law for ‘legitimising’ Love Jihad, which liberals insist is a myth!

Many states of Bharat have anti-conversion laws to tackle the menace of Christian missionaries who use various stratagem to effect conversions, including denigration of Hindu Dharma, appropriation of Hindu traditions and symbols, fake healing or other ‘miracles’, allurement such as access to schools, hospitals, job placements and other monetary benefits made possible by foreign funds and immense wealth garnered by various Churches during British colonial rule, and of late through abuse of SC/ST quota and other government schemes.

This gives rise to a related question – why do Christian missionaries avoid Muslim localities for their proselytisation activities? Well, this is mainly for two reasons –

(a) Muslims are schooled in their religion from birth as they control their religious institutions and schools, whereas most large Hindu institutions are controlled by the state and have been bled dry to the point where they hardly engage in spreading or teaching Dharma, leaving Hindus confused, disorganised and ripe for conversion.

(b) Muslim retaliation against perceived blasphemy is quick and brutal, and they enjoy exceptional and reverential treatment from government and courts in such matters. Hindus, on the other hand, have been softened through decades of subtle mocking of their religion and sacred icons in textbooks, popular media etc. and through the transformative mission of the secular state to accept even the worst abuse against their deities. Any Hindu who speaks up is branded ‘communal, regressive, bigoted’. Even the slightest resistance by Hindus is projected as ‘persecution of Christians’ and echoed by international media, leading to censure by the secular state which wants Hindus to respect those who denigrate them!

“Christian missionaries and their leftist-Islamist allies term these laws as unconstitutional and impinging upon the fundamental right to propagate religion, we must remember that in the Stanislaus v. State of Madhya Pradesh case of 1977, the Supreme Court had said that “right to propagate religion” did not include the “right to convert” any person!

This judgment was necessitated by the Freedom of Religion Acts enacted by Odisha and Madhya Pradesh in 1967-68. Christian missionaries wanted unfettered right to convert Hindus by hook or crook, while the government became aware of their activities. Therefore, Mr. Stanislaus challenged the act in MP High Court and the case went up to Supreme Court.”

In fact, in less than a decade after Independence, the Congress government of Madhya Pradesh set up a commission in 1956 under retired High Court Justice Niyogi to study Christian missionary activities. This Niyogi Commission interviewed and contacted thousands of people, and its findings shocked policymakers – it laid bare several unethical and outright criminal methods used by missionaries to convert people. The Niyogi Commission recommended the legal prohibition of religious conversion not completely voluntary. It was never implemented by the Congress government.

Today, although many other states also have anti-conversion laws, UP is leading the way in actually enforcing the law and bringing those involved in illegal conversions to book. This is the reason why the Yogi government and this new law has drawn the venom of the Nehruvian Lutyens’ intelligentsia and MSM editors.

The next challenge is going to be actually convicting people under the new law. How that battle will unfold in pseudo-secularism obsessed courts, only time will tell. For now, ordinary Hindus of UP are breathing a sigh of relief that finally the system is paying heed to their woes and police is enforcing the law, notwithstanding some hiccups.