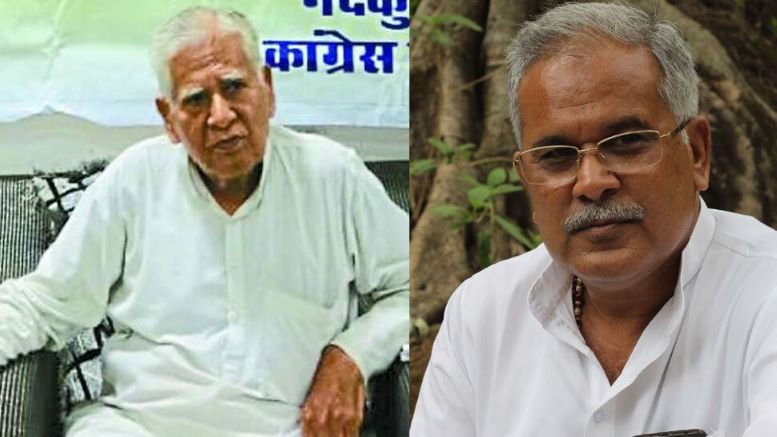 A video from last year has surfaced in which Nand Baghel, father of Chattisgarh Congress CM Bhupesh Baghel, is seen spewing venom against Hindus. The senior Baghel was delivering a speech at Delhi’s Constitution Club demanding increased reservation for backward classes.

Baghel said that Kolis should stop identifying themselves as Hindus because the word Hindu is an abusive word. None from the community should support RSS or accept Hindutva because this is a means to keep lower castes subservient to the Brahmins. Further, he says that Hindu is an Arab word used by the invading Arabs to show that the lower castes were the slaves of Brahmins.

However, the lower castes have now realized that the word was used to keep them subjugated to the Brahmins, especially the people of Chhatisgarh, and hence no Brahmin candidate will win here. He spews more venom against Brahmins in a bid to create a divide within the Hindu community.

The senior Baghel in the same meeting also put forward his views about Naxalism. Baghel said that a campaign is being run to end Naxalism but in his opinion, Naxalism is not oppressive. Here too, Baghel brings in Brahmin oppression saying that Naxals have to fend off the Brahmins who are capturing their lands and conduction Hindu religious rites such as yagna thereby promoting Vedic Dharma which they (Naxals) are forced to oppose.

Nand Kumar Baghel then goes on to justify the violence by Naxals and equates it with the stone-pelting in Kashmir. He says both these are justified and both the Naxals and Islamic extremist movements are legitimate. He even goes as far as saying that he requests the Bhupesh Baghel government to ensure that they apply Schedule 5 of the Bharatiya Constitution in the Naxal areas and if that is not possible then the police should fight on the side of the Naxals. In other words, Baghel not just wants to encourage extremism but also ensure that the administration itself is helping the Naxals.

He accuses Brahmin administrators of ignoring the concerns of lower caste people and says that he will run a campaign to terminate all Brahmin administrators from their posts in the Naxalite areas. Further, he also wants the Baghel government to constitute a committee to probe these Brahmin administrators be it the collector or any other officer. He even makes baseless allegations about Brahmins ensuring that SC, ST, OBC, and Muslim candidates who clear the administrative exams are failed in the interview.

His entire speech is an anti-Brahmin rant and he even brings in the discredited Aryan Invasion Theory to state that the Brahmins were outsiders who came in and imposed their Vedic religion on the indigenous people. The Aryan Invasion (Migration) Theory, which has already been disproved, is a favorite with the likes of Baghel who want to divide the Hindu society for their narrow political interests.

Baghel wants all the Brahmin IAS/IPS officers to be removed and in their place, those backward and Muslim candidates who have failed the oral exams are to be appointed.