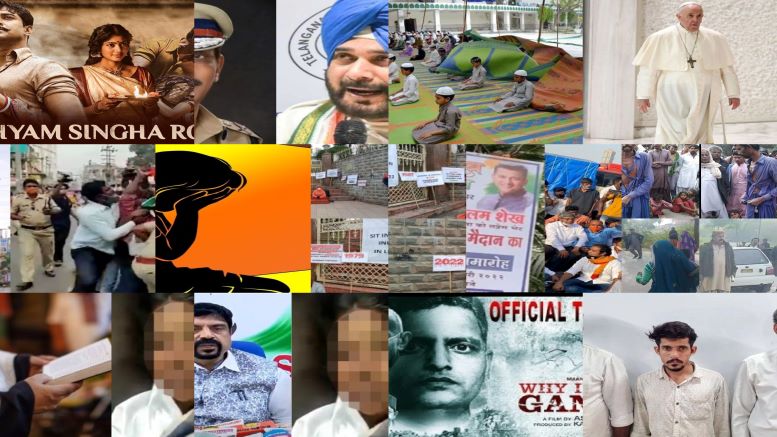 In this weekly summary for the period from 23 January to 29 January 2022, we hope to provide a snapshot of such crimes and hopefully awaken more people around the world to this human rights crisis:

1) The Muslim students of Someshwara Palaya Bale Changappa Government Kannada Model School in Mulbagal, Karnataka were filmed performing namaz inside a classroom. As the video went viral on social media, parents of other students, alumni of the school and Hindu outfits staged a protest against this practice saying that it will set a wrong precedent.

2) Three pedophiles who engaged in unnatural sex with a 12-year-old boy have been arrested from Malappuram. Ummer Keezhatoor (a native of Perinthalmanna), Osama, and a tailor named Ummer were produced before a court in Tirur and remanded to judicial custody.

3) The Lalitpur police have filed a charge sheet against former district presidents of the Samajwadi Party (SP) and the Bahujan Samaj (BSP), among others, in connection with the alleged gangrape of a 17-year-old girl.

4) A middle-aged couple from Shillong on Sunday started their ‘indefinite hunger strike till death’ in protest against the alleged atrocities committed against the people belonging to non-tribal communities in Meghalaya.

5) The Maharashtra Congress on Monday urged Chief Minister Uddhav Thackeray to ban the film “Why I Killed Gandhi”, set to release on various OTT platforms on January 30, the anniversary of Mahatma Gandhi’s assassination.

6) Hinduphobia in the Telugu film industry has gone to the extent of producing well-made blockbusters with A-list actors mouthing Hinduphobic lines. I am talking about the moving ‘Shyam Singha Roy’ starring Nani and Sai Pallavi, both excellent actors.

7) The issue of a Hindu girl killing herself unable to bear the harassment for refusing to convert is being spun as a casteist issue by DMK and its allies. DMK ally MP has tweeted connecting the issue with casteism by dominant castes. The School Education Minister of the DMK government has dismissed the conversion angle and claims to have the statements of 30 students of the same school to prove their point. As everything points towards sabotage of the investigation, the girl’s parents have moved the court demanding a CBI inquiry.

8) A pastor has openly admitted in a media debate that non-Christians are lured with sponsorship for education to convert them to Christianity. He had made this revelation while discussing the issue of a 17-year-old Hindu girl dying by suicide due to pressure exerted on her to convert.

9) Rapidly rising corona cases forced the Kerala government to declare a total lockdown on Sunday. An Islamist mother and son duo used the day to unleash a vile hate campaign against Kerala police.

10) The repeated absence of the special public prosecutor representing lynched tribal youth Madhu has been questioned by the Mannarkkad SC/ST special court. The special public prosecutor was absent during November 15, 2021, hearing forcing the court to adjourn the hearing to January 25 this year. However, the prosecutor failed to appear in court yesterday as well and the hearing has now been adjourned until February 26.

11) In another appalling case of grooming jihad reported from Uttar Pradesh, a Nepalese Muslim man married a Hindu woman after converting her to Islam and is now accused of her murder after the dead body of the woman was recovered from the couple’s house. As per medical reports, the victim was strangulated to death.

12) Police arrested a private bus conductor named Afzal from Pala in Kottayam after he groomed and raped a 13-year-old class 8 student. The minor was sexually assaulted inside a bus that the rapist had parked inside the private bus stand. The incident occurred around 1.30 PM on January 15.

13) Rajdeep Singh (23) was arrested on Monday for desecrating the historic Kali Maa Mandir in Patiala, Punjab. The incident took place during prayer time when the accused climbed onto the Garbha Griha (sanctum sanctorum) and grabbed the Murti of the goddess.

14) A young man was shot dead on Tuesday at Dhandhuka in Ahmedabad district, days after a furor over a video shared by him on social video. Although media reports are silent on the exact contents of the video, social media sources state that an FIR was lodged against Kishan Boliya over the video which showed Sri Krishna as bigger and stronger than other Gods including Allah.

15) What the church does in the name of secularism is its attempts to spread Christianity outside its precincts. The following incidents of Hindu hatred and conversion attempts are a testimony of that.

16) An FIR has been registered against Sidhu-aide ex-DGP Mustafa for anti-Hindu hate speech during his campaign for his wife Congress candidate Razia Sultana.

18) Karnataka Police have arrested a 27-year-old Bangladeshi immigrant woman who stayed in Bharat posing as a Hindu for 15 years based on the inputs by the Foreigners Regional Registration of India (FRRO) in the outskirts of Bengaluru, police said on Friday.

19) Members of Hindu Vahini were manhandled and detained by the Guntur police when they attempted to hoist the tricolor at the Jinnah Circle’s tower named after Mohammad Ali Jinnah in Guntur on the occasion of Republic Day.

20) Samajwadi Party candidate from Meerut, Adil Chaudhary, has been booked under IPC section 505 (promoting enmity, hatred) after a purported video of his went viral in which he can be seen saying that if the SP forms the next government in Uttar Pradesh, he will take ‘revenge’ and teach Hindus a lesson.

21) The ‘secular’ MVA (Maha Vikas Aghadi) government displayed its fascist side yet again as the Mumbai police registered FIRs against those protesting against the renaming of a sports complex in Malad’s Malvani after 18th Century anti-Hindu tyrant Tipu Sultan. Even as MVA ally Congress MLA Aslam Shaikh inaugurated the Tipu Sultan maidan, ‘Hindutvawadi’ Shiv Sena’s MLA Aditya Thackeray insisted that the name of the complex hasn’t been finalized.

22) Nestle India-owned chocolate KitKat came out with wrappers using images of Bhagwan Jagannath, Balabhadra and Mata Subhadra. This sacrilegious act hurt Hindu religious sentiments and Nestle faced backlash, especially on social media, after which the company informed that they had withdrawn these packs from the market.

23) With no help forthcoming from authorities, a young Hindu lady journalist from Delhi is on the verge of suicide. The graduate with a degree in Mass Communication was pressurized to accept Islam by her employer and mentally and physically abused when she refused, but police are downplaying the matter. She was employed by Shanavas (Shaan) Chaudhary who runs a YouTube-based ‘news’ channel called News Action Network and has an office in Preet Vihar, Delhi.

24) In a viral video, TMC MLA from Kamarhati Madan Mitra can be seen insulting the national flower that has a great significance in Hindu Dharma by tearing apart a couple of lotuses while stating that in West Bengal the lotus will no longer be offered to the Goddesses.

1) Hindu minorities of Pakistan continue to face persecution in the Islamic nation. Even on those rare occasions when courts rule in favor of Hindus, Islamists show scant regard to the law. In an incident reported by Persecution Report PK, it has come to light that 55 Hindus, including men, women, and children, who had been held as slaves by Muhammad Ali, were set free by the District and Session Judge in Sindh’s Umarkot.

2) While the dominant Sunni Muslim population in Pakistan has always reacted furiously against alleged blasphemy accusations, their reaction to the desecration of non-Muslim religious places has always been inversely opposite and reflective of a kind of indifference or complicity, according to a new study in Pakistan.

1) Pope Francis pushed for more aggressive evangelism in his World Mission Day message released on January 6. The Pope called for renewed efforts to spread the Gospel.

In Bharat, cow smuggling is no longer a lucrative business