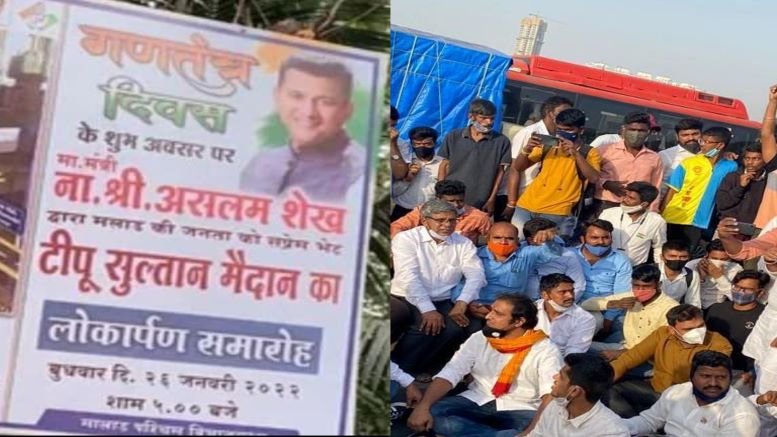 The ‘secular’ MVA (Maha Vikas Aghadi) government displayed its fascist side yet again as the Mumbai police registered FIRs against those protesting against the renaming of a sports complex in Malad’s Malvani after 18th Century anti-Hindu tyrant Tipu Sultan. Even as MVA ally Congress MLA Aslam Shaikh inaugurated the Tipu Sultan maidan, ‘Hindutvawadi’ Shiv Sena’s MLA Aditya Thackeray insisted that the name of the complex hasn’t been finalized.

A refurbished ground in Mumbai’s Malvani area was inaugurated on Republic Day by Congress MLA Aslam Shaikh who is Mumbai’s ‘guardian minister’ and under whose constituency the said ground falls.

As per reports, Two FIRs have been registered at the Malvani police station for unlawful assembly, rioting, and violation of COVID-19 guidelines against 64 people from the Bajrang Dal and the BJP including BJP MP Gopal Shetty and Mumbai BJP President Mangal Prabhat Lodha.

Condemning the arrest of those protesting against the renaming, BJP MLA Atul Bhatkhalkar tweeted “We protested against renaming the maidan in the name of Tipu. We won’t tolerate celebrating those who were anti-Hindu. We aren’t afraid of police action but we won’t allow appeasement politics”.

“No formal proposals have been discussed on this issue. Once there is a formal proposal the BMC will decide on the issue”, Aditya Thackeray told reporters. His party colleague Sanjay Raut opined “If they say it has been named after Tipu and that they will do this and that then they should let it be, saying all this doesn’t suit them. State government is capable of making decisions. Don’t write a new history. You can continue trying to change history in Delhi but you won’t succeed”.

“The garden is named thus (after Tipu Sultan) for the last 15 years, but nobody objected to it till now. LoP has raised objections to the naming of the complex after Tipu Sultan. My question is: will he ask his party’s MLA &councillor, who first made this proposal, to resign?”, questioned Shaikh while defending himself.

The Muslim-dominated Malvani area comes under the constituency of Aslam Shaikh. There have been reports of Hindus being systematically harassed to evict and depopulate them from this Mumbai suburban area. The issue of Hindu exodus in Malvani was also raised in the Maharashtra assembly in March last year by BJP MLA Mangal Prabhat Lodha.

Malvani has witnessed murders of Hindus over petty issues. In December last year, Surendra Gaud (47) was murdered by 25-year-old Saif Ali Shaikh in a fit of rage after the latter allegedly refused to reduce the volume at which he was listening to songs on his tape recorder. Last February, a Hindu resident of Malvani narrowly escaped being lynched by a communally charged Muslim mob of 15-20 people gathered outside the house of the victim after the latter objected to unpalatable remarks passed by Muslim youths.

Annoyed by the opposition from the Hindu man, the group of men threatened him with dire consequences and tried to barge inside his house. After the police refused to file an FIR in the case, the victim and the Hindu representatives in the region reportedly contacted BJP Mumbai President Mangal Prabhat Lodha and apprised him of the developments. On Lodha’s insistence, the police filed an NC against the mob that threatened the resident.

Malvani has also seen the police tearing down posters of Prabhu Sri Ram and arrest of VHP workers involved the fund collection drive for the Sri Ram Mandir in Ayodhya last January. The police apparently cited the banners being ‘controversial’ and ‘hurting sentiments’ of the locals in the Muslim-dominated Malvani area where the incident took place as the reason for bringing them down.

The area is reported to be a stronghold of 3-time Congress MLA from Malad West Assembly Constituency, Aslam Shaikh, who is also the Minister of Textile, Fisheries and Port development, Government of Maharashtra. Congress is currently in power in Maharashtra in the MVA alliance with NCP and Shiv Sena.

Ever since Shiv Sena has been heading the MVA alliance, the party and its leaders have been trying hard to prove their ‘secular credentials’. In March 2020, as popular Marathi serial ‘Swarajyarakshak Sambhaji’, aired on Zee Marathi¸ was gearing up for its final episode last month, when senior Shiv Sena leader and former minister Arjun Khotkar demanded that events following the arrest of Chhatrapati Sambhaji Maharaj should not be aired at it would disturb ‘social harmony’ in the state. Chhatrapati Sambhaji Maharaj was brutally tortured and murdered by Aurangzeb on the banks of the river Bhima near Pune, but refused to convert to Islam till his dying breath.

Similarly, Sena MP Krupal Balaji Tumane, representing Maharashtra’s Ramtek constituency, ‘paid rich tributes’ to tyrant Tipu Sultan who has butchered Hindus in his post in May 2020 on the occasion of the Muslim tyrant’s death anniversary. It must be mentioned that Sena had earlier slammed the then Congress Karnataka government for celebrating Tipu’s birth anniversary calling him a ‘ruthless ruler who massacred Hindus’ and had even decried comparing a tyrant like him with Maratha emperor Chhatrapati Shivaji Maharaj.

In their attempt to pander to minorities in general and Islamists in particular, every party of the MVA assumes it must be abusive towards the majority community. By some strange calculation, hurting Hindu religious sentiments seems to be directly proportional to the popularity the 3 parties and their leaders think they will gain with Islamists.