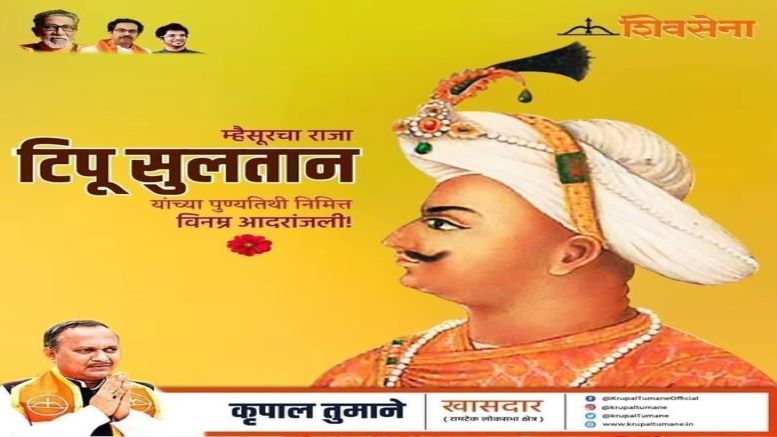 Shiv Sena (SS) which once prided itself on Hindutva has now completely transformed itself into a pseudo-secular party that has taken minority appeasement to a new level. SS Member of Parliament (MP) Krupal Balaji Tumane, representing Maharashtra’s Ramtek constituency, has ‘paid rich tributes’ to tyrant Tipu Sultan who has butchered Hindus. So much for Shiv Sena’s Hindutva.

Having allied with the Congress and NCP, Sena has taken a U-turn on its earlier stand when it had slammed the then Congress Karnataka government for celebrating Tipu’s birth anniversary calling him a ‘ruthless ruler who massacred Hindus’ and had even decried comparing a tyrant like him with Maratha emperor Chhatrapati Shivaji Maharaj. Politics makes one do strange things. SS chief Uddhav Thackeray who had asserted that he was ‘still firm on Hindutva’ seems to share Tumane’s views and has hence maintained a stoic silence.

Tumane should have read up on the true history of Tipu before ‘paying his respects to mass murderer of Hindus. Mr. Sandeep Balakrishna (author of Tipu Sultan; The Tyrant of Mysore) has unveiled the ‘real Tipu’, who was nothing but a tyrant, in his blog. He has pointed how Congress propagated Tipu as a hero and freedom fighter myth to further its vote bank politics.

Primary sources, including Tipu’s own diaries and letters as well as accounts of contemporaries. His raids into Kodagu and Malabar show how brutal Tipu was and how he tortured Hindus. Around 4000 Kodavas of Coorg were taken prisoners, brutally tortured, forcibly converted to Islam and incorporated them into his Ahmadi corps. Malabar still bears the scars of Tipu’s gory invasion when he razed Kozhikode to ground. The tyrant did not even spare women and children. Mothers were hanged with their children tied to their necks.

Tipu himself proudly proclaims in his letter how ‘with Allah’s grace almost all Hindus of Calicut (Kozhikode) were converted to Islam’. He made no effort to hide his hatred for Kaffir Hindus and prove how committed he was to Islam. He not only changed the official administrative language from Kannada and Marathi to Farsi but also ensured that only Muslims were appointed to important military and administrative posts.

Besides this, as an MP from Maharashtra and from a party that swears by Chhatrapati Shivaji Maharaj, Tumane should have known how Marathas defeated Tipu in the Gajendragad battle and forced the latter to pay an annual tribute to the Marathas.

Shiv Sena may have turned pseudo-secular after joining hands with Congress but that doesn’t mean it has to shamelessly peddle minority appeasement at the cost of Hindus. May be it is time for the party to introspect and reassess its ideology. It is also high time the party stops taking Hindus for a ride as its minority appeasement has been exposed in recent times.

An earlier version of the article had erroneously mentioned that the Sena MP had paid respects on Tipu Sultan’s birth anniversary, whereas the wishes were for the Islamic king’s death anniversary.