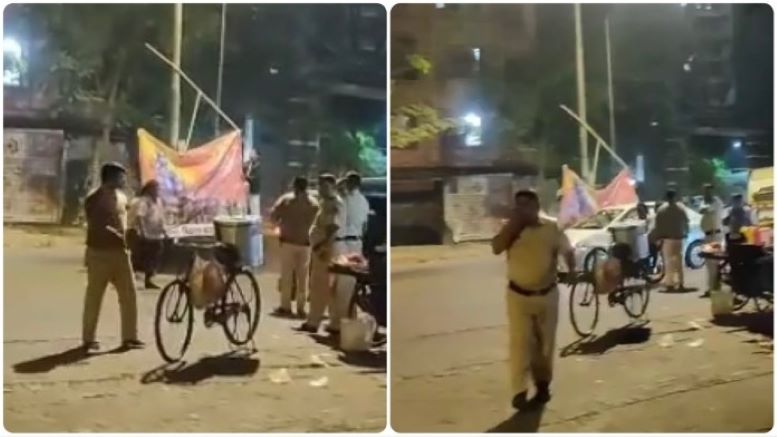 The Mumbai police yesterday arrested Vishva Hindu Parishad (VHP) Karyakaratas (workers) for putting up a banner of Prabhu Shri Ram in the Malvani area of Malad suburb, Mumbai during the fund collection drive for the Sri Ram Mandir in Ayodhya.

The area is reported to be a stronghold of 3-time Congress MLA from Malad West Assembly Constituency, Aslam Shaikh, who is also the Minister of Textile, Fisheries and Port development, Government of Maharashtra.

Uddhav hates Hindutva so much that now it is a crime to say Jai Shri Ram in Mumbai.

In the video, one can clearly see how Mumbai Police tore Prabhu Shri Ram’s poster put up to promote Ayodhya Ram Mandir Nidhi Sankalan Abhiyan. VHP, RSS & BJP workers staged protests within the police station to secure the release of arrested workers. It was only after the intervention of high ranking police officers that the arrested workers were released.

The police apparently cited the banners being ‘controversial’ and ‘hurting sentiments’ of the locals in the Muslim-dominated Malvani area where the incident took place as the reason for bringing them down. Putting up a series of tweets regarding the issue, social org LRO which fights for legal rights of indigenous people has called for action against the errant police officers.

Earlier Mumbai police had removed saffron flags from buses on the instructions of the Uddhav Thackeray-led MVA government and even issued notice to the mother of Hindu girl Karishma Bhosale who had objected to the illegal speakers in a mosque near her residence. The same police, however, has no qualms in practising ‘secular’ traditions. It is customary for the Mumbai police to salute Pir Hazarat Makhdoom Shah with the police band in full display.

This time the police have taken their Hindudvesh too far by tearing banners of Bhagwan Ram. Not just the police but also the so-called Hindutva CM Uddhav Thackeray are answerable for this Hindudveshi action.