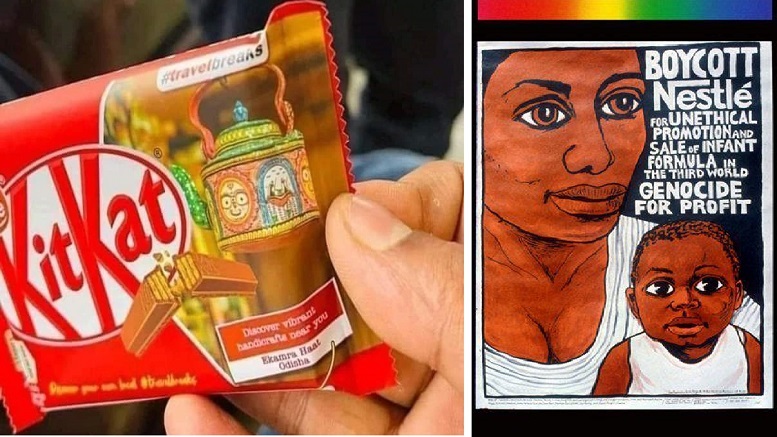 Nestle India-owned chocolate KitKat came out with wrappers using images of Bhagwan Jagannath, Balabhadra and Mata Subhadra. This sacrilegious act hurt Hindu religious sentiments and Nestle faced backlash, especially on social media, after which the company informed that they had withdrawn these packs from the market.

Nestle knew perfectly well that the images of our deities will eventually be abandoned in dustbins after consumers finish eating the chocolates. They joined a host of such anti-Hindu multi-national an even domestic companies who openly operate in Bharat and regularly make a mockery of both Hindu religious beliefs and the laws of the land. Seldom do they indulge in profanity against the global behemoths – Christianity and Islam.

The company then went ahead and said that the intention was to promote art and artists. Kitkat packs celebrate beautiful local destinations, and we wanted to celebrate the culture of Odisha, said Nestle. Such responses made it clear that this was all part of a marketing strategy where they indicated that those opposing the wrappers were against art, Odisha and what not.

Nestle is the world’s largest consumer food and beverages company but leaked internal presentations showed that a majority of products are unhealthy. The company admitted that most products do not meet basic standards and acknowledged that most of their food spin-offs will “never be healthy”. This was after reducing sugar and sodium content by 15% over the past several years.

In 2015, tests conducted on packets of Maggi found that the amount of lead found was over 1,000 times more than what Nestle had claimed and that it also contained copious amounts of monosodium glutamate. In Bharat, it is popularly known as Ajinomoto and the salt-like ingredient is mainly used to preserve convenience foods. Ajinomoto’s side effects are pretty well known and it is addictive too.

Bharat recalled 38,000 tonnes of Maggi Noodles from retail stores across the country and incinerated them at 11 cement plants across Bharat. Maggi’s share in the Bharat market went down from 80% to zero. Mysteriously they made a comeback within 5 months. It is rumored that some changes have been incorporated with regard to the actual amount of such chemicals that they now pack, for local sales.

In 2019, Nestle’s Swiss parent company was embroiled in a controversy that involved top hospitals in Bharat and breastfeeding mothers. Two studies came under the scanner – a multi-country observational study on infant feeding registered in December 2018 that lists Societe des Produits Nestle in Switzerland as its primary sponsor and another observational study on composition of milk of nourished and under-nourished mothers with funding and sponsorship of Nestec Ltd of Switzerland, which was registered in 2014.

A committee constituted by the Indian Council for Medical Research (ICMR) found that Nestle’s sponsorship of these ‘studies’ violated Bharat’s laws on infant milk substitutes. Both subsidiaries of Nestle and several well-known hospitals were acting against the interests of the nation’s future generations. Infant Milk Substitutes Act clearly states that “No producer, supplier or distributor shall offer or give any contribution or pecuniary benefit to a health worker or any association of health workers, including funding of seminar, meeting, conference, educational course, contest, fellowship, research work or sponsorship.”

Cocoa plantations in Ghana and the Ivory Coast supply 80% of the global demand for chocolate. Even today, African children are trafficked and forced into slavery on such cocoa plantations. Nestle’s Executive Vice-President for Operations Jose Lopez said that no company sourcing cocoa from the Ivory Coast can guarantee that child slavery and abuse do not happen.

This meant that the company was fully aware of where their cocoa was coming from and under what conditions but did little to improve things. In 2010, US Courts decided that corporations cannot be held liable for violations of international law and dismissed the suit that was filed against Nestle.

Back in the 70s, Nestle played out a sad story that involved poverty, greed and breastfeeding. It aggressively pushed its formula milk in less economically developed African countries and specifically targeted the poor. They unethically created an illusion that their infant food was as good as a mother’s milk and this led to Third World mothers getting hooked on their formula.

It turned out to be a disaster and stopped but not before formula-fed children living in disease-ridden and unhygienic conditions started to die. Studies revealed that formula-fed infants in such countries were 25 times more likely to die of diarrhea than breastfed ones. None of Nestle’s products even bore the standard warning “breast is best”.

Nestle proved that they have no issues in striking dubious partnerships to make profits when they partnered with Grace Mugabe. Since 2002, Zimbabwe’s notorious dictator Robert Mugabe’s wife had illegally snatched several highly valued farms to build a farming cartel for herself. Nestle’s plant on the outskirts of the capital Msasa that was manufacturing powdered milk for exports bought a grossly undervalued 10 lakh liters of milk from Mugabe’s farms.

In 2002, Nestle demanded that Ethiopia pay them back a debt of US$6 million that it claimed as compensation for the 1970 seizure of foreign assets by the local government. Ethiopia was facing extreme famine and a company that makes millions asking a famine-stricken country to repay ‘debt’, stirred international outrage. In the end, Nestle settled for a partial debt repayment which they again invested in Ethiopia.

Around the same time, tons of imported powdered milk were relabeled under a local brand and even its production dates were changed by Nestle in Colombia. Ultimately, some of it was recalled and destroyed.

Incidentally, both the International Labour Organization and the Nestle headquarters are located in Switzerland. The Swiss are famous for their chocolates and the fact that the country is a safe haven for concealing funds belonging to corrupt governments, drug runners and weapons smugglers.

Several organizations, universities, committees, and nations now monitor Nestle’s dubious trade practices. For Make in Bharat to really take off, we need to come up with better alternatives in the processed food space that abide by Dharma and put consumers first.