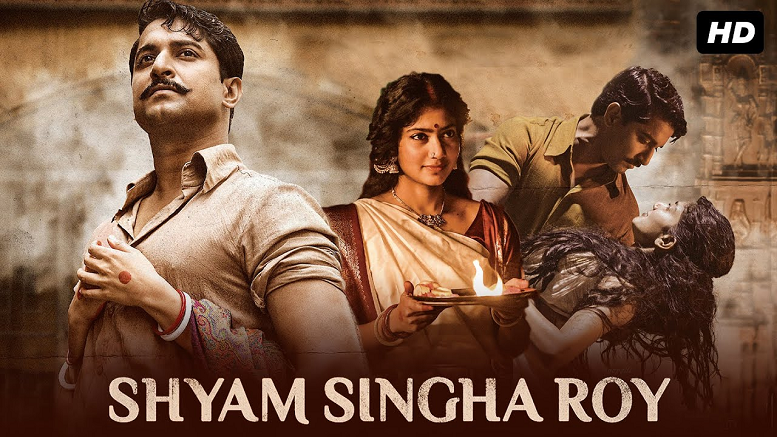 Hinduphobia in Telugu film industry has gone to the extent of producing well-made blockbusters with A-list actors mouthing Hinduphobic lines. I am talking about the moving ‘Shyam Singha Roy’ starring Nani and Sai Pallavi, both excellent actors.

The film is well made with a grippingly told story. Yet, the Hinduphobia and the Brahmin hatred comes through, and the director’s mind-colonized mentality is very visible in the way he has portrayed the ‘reformist’ hero (Christian word, refer to Sai Deepak J‘s book)

Main story is set in the 1960s. There is a scene where dalits are denied access to a well as they are deemed unclean. While untouchability as a practice existed in Bharat, the villains are Brahmin men with janeau, and the ‘reformist’ hero says “This is not your Rig Veda time.”

The hero’s ‘backward’ brothers are shown wearing Bharatiya outfits, with Hindu symbols. Whereas ‘reformist’ atheist hero is entirely in western wear, twirling moustache, and chain-smoking. Hindu attire/symbols are shown as bad and Western attires and smoking are shown as good.

The film shows Devadasis as residing within a temple and never leaving the temple compound. This maybe true of Christian convents but Devadasis as temple dancers had free movement. Even in Mrichchakatika times, Devadasis lived freely and went everywhere. Thus, a false portrayal has been done here.

Also Devadasis lived in a colony close to the temple – never within temple walls. The cleanliness rules of a temple did not allow people to constantly reside there. The janeau-sporting temple priest (Mahant) is shown as sexually abusing. He trapped women within a temple.

This brahmin priest supposedly has so much power that he can make the Devadasis line up, and choose one among them! And at one point he chooses a young 8 year old! So Brahmin priest is shown as a pedophile. He carefully places his janeau over one ear and urinates on a woman.

The reference to Rig Veda, portraying Brahmins as denying water to dalits, as predators and pedophiles, all the while flashing janeaus, shows high level of investment from Hinduphobic forces using their money power to demonize Hindu Dharma.

This does not end here. The hero after rescuing the heroine (a Devadasi) renames her ‘Rosie’ – ostensibly because she looks good with roses in her hair. He says that Indian word for rose (Roja) but calls her Rosie anyway. Subtle bow to Christianity.

Hero wearing Western clothes is murdered by his casteist brothers who raised him, because he brought ‘dishonor’ to family by marrying a Devadasi, thus equating Hindu Dharma to caste and caste only. Referring above on Brahmins, Hindu-outfit sporting evil brothers are the ones who commit fratricide.

The heroine, rechristened Rosie, says that she was sold to a temple “in exchange for a ricebag”. That is a clever turnaround to hit at Hindus who use this slur for Christians who converted for money.

The hero, when beating up the predatory Brahmin priest, walks up to Devi Durga’s murti, places one slipper-clad foot on Her, and grabs a knife from Her hand, to use as a weapon against the Mahant. Mahant is shown as a fighter who lifts hero with one hand.

The way they have crafted a gripping reincarnation story, woven their Brahmin hatred and Hinduphobia overtly and subtly, invested in A-list stars to create a blockbuster-type of film, shows a carefully thoughtout and planned strategy to demonize Hindus and Hindu Dharma.

I have never seen this kind of hatred in Telugu films; the way the westernized hero says ‘Rig Veda times’ is truly sick. I dare him to utter a dialogue referencing any other holy book. Amazing that they got two Hindus – Nani and Sai Pallavi to play the leads.