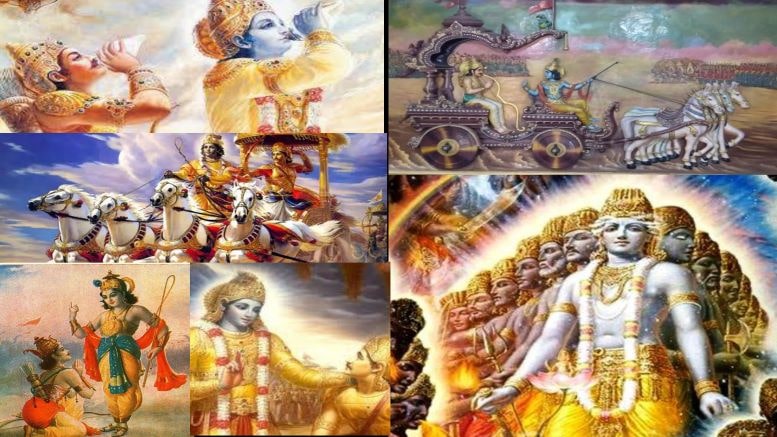 Just as the Mahabharat is the compendium of Sanatana Hindu Dharma, Bhagavad Gita is its essence. It is the epitome of Hindu philosophy and a summarized version of all the Hindu granthas (read part 1, 2, 3, 4, 5 & 6 here) put together.

Mahabharat in itself has a great significance in Hindu society and the Gita only elevates that position several notches. However, the Bhagavad Gita is much beyond just a grantha, it is a guide to lead life. Gita is particularly useful in today’s fast paced competitive life. It is the torch that lights the path in the darkness of Kaliyuga.

Bhagavad Gita – etymology and other facts

Gita is derived from the Sanskrit root word Gi or Ga meaning to sing, in other words since it is related with gaayan (singing – gayati iti Gita) it is known as Gita and as Bhagwan Krishna gave the Gitopadesa it is called Bhagavad Gita meaning song of the divine.

Although we are limiting ourselves to the study of Bhagavad Gita, it must be mentioned that there are several Gitas (dialogues as well as upadesas). The Mahabharat alone has around 30-35 Gitas. In fact, Bhagavad Gita became the model on which subsequently several sampradayas based their Gitas such as Ganesh Gita, Shiv Gita, Shakti Gita and Surya Gita among others.

However, the Bhagavad Gita is the most important because Bhagavan Sri Hari Vishnu Himself was giving upadesa. As Bhagwan Adi Shankaracharya says in His Bhagavad Gita Mahatmya (Note: this shloka is also attributed to Bhagwan Ved Vyas):

the upadesa that was sung by the Supreme Bhagwan Himself.

Bhagavad Gita was the upadesa that Bhagwan Krishna gave to Pandav Arjun on the battlefield of Kurukshetra when the latter was faced with a dilemma. The day of Gitopadesa fell in the Hindu month of Margashirsha during the Ekadashi tithi of Shukla paksha (bright fortnight). Hence, every year Margashirsha Shukla Ekadashi is celebrated as Gita Jayanti.

Jayanti of only two other granthas is celebrated in Bharat; namely Dnyaneshwari Bhavartha Dipika by Sant Dnyaneshwar which falls on Bhadrapad Krishna Sashti and that of Dasbodh by Sant Samarth Ramdas is celebrated every year on Magh Shukla Navami. Both these granthas are in Marathi.

Gita is a part of Mahabharat’s Bhishma Parva and comprises 700 shlokas divided into 18 chapters. Of the 700 shlokas, around 50 comprise Arjun’s questions, some of them are Sanjaya’s narration, one is attributed to Dhritarashtra and the rest are Bhagwan Sri Krishna’s upadesa. It is entirely in the form of conversation.

Bhagavad Gita is a dialogue between Bhagwan and his disciple whose origin lies in Arjun’s dilemma. Arjun after having reached the battlefield finds himself unable to wage war against his own people. The moral dilemma that Arjun faces with having to choose death and destruction for his brothers, uncles, teachers, grand-uncle, and several other close relations and the ensuing confusion which was ultimately cleared by Bhagwan Krishna enriched Sanatana Dharma as also the entire world with Bhagavad Gita.

The purpose of Gita was not only to solve Arjun’s dilemma but as Bhagwan Adi Shankaracharya put it Paramatma simply made Arjun as the means to teach mankind Santana and Vedic philosophy. The purpose of the Gita is also to guide humankind regarding what constitutes Karma and the various paths to achieve it.

The chapters of Bhagavad Gita and the subject matter they deal with have been briefly discussed below. Meaning: Anger is the root cause of attachment which in turn leads to the destruction of human intellect thereby leading the person on the path of destruction

Meaning: One who treats the pairs of opposites such as happiness-sorrows, gains-losses, and victories-defeats will not accrue paap (sins)

Meaning: Only the person who is devoted, quick, and has won over his/her senses is able to acquire true knowledge which ultimately helps the person to attain peace

Meaning: Neither weapons can destroy the soul nor can it be burnt by fire. The soul is neither drenched by water nor can the wind dry it

Meaning: It is far better to perform one’s natural prescribed duty faultily than another’s duty perfectly. It is also preferable to die or face destruction while discharging one’s own duty than following another’s path which is dangerous.

Meaning: The one who surrenders totally to me leaving aside every form of Dharma, I shall free him from all sins, so do not worry oh Arjun

The Gita is a grantha that integrates teachings of various theistic schools of thought such as Vedanta, Samkhya, Yoga, and many others. Several acharyas, scholars, and eminent personalities have written commentaries on the Gita of which we have listed a few here.

Meaning: One who recites the Bhagavad Gita, bestower of all virtue, with devotion and a regulated mind will attain Vaikuntha where Bhagwan Sri Hari Vishnu dwells and which is free from mundane qualities such as fear and lamentation

Meaning: Upanishads are akin to cows which are milked by Bhagwan Krishna while Arjun is the calf. The nectar of Gita is the milk thus extracted, the benefits of which are derived by devotees. In other words, humankind has been blessed with the nectar of Gita which Bhagwan gave the world making Arjun the medium

The Bhagavad Gita is a one-stop solution for all of life’s dilemmas and the sooner one is introduced to it, the easier it becomes to cross the samsara sagar.

Bhagwan Adi Shankaracharya has also mentioned the greatness of Bhagavad Gita in shloka 20 of His Mohamudgara stotra (Bhaja Govindam) which says:

Meaning: He who has studied Gita even a little, taken even a sip of the sacred Gangajal, and prayed to Bhagwan Krishna even once, such a person will never have any altercation with Yama Dharma Raja.

Having taken a glimpse of the various Hindu granthas in this series, we hope that one would have derived enough inspiration to embark on a journey of discovery. It is my personal belief that a sadhak should begin his/her journey from Mahabharat (a personal favorite) including the Bhagavad Gita (preferably but not necessarily with the guidance of a Guru) and work one’s way up to the Shruti Granthas (that can be learned only at the feet of a Guru).

Dealing with the complexities of Karma and Dharma