Having already learned about the Ramayana, it is now time to turn our attention towards Mahabharat which familiarizes us with Bharat’s Itihas in addition to carrying essential life lessons for every Hindu.

Mahabharat is a grantha that essentially sums up the Vedas in general and Upanishads in particular (read parts 1, 2, 3, 4 & 5 here) along with teaching us Dharma. This is the second Mahakavya among the Hindu granthas and has been composed by Bhagwan Veda Vyas.

From Jay (Jaya) to Mahabharat

Mahabharat begins with the shloka

The shloka is also recited as

Vyasa here refers to the Vyaspeeth of which Rishi Parashar’s son Bhagwan Veda Vyas was the 28th Vyas which began with Apantartama Vyas in the Satya Yug.

The meaning of the shloka is: Oh reader (listener) begin this Mahakavya named Jaya after having bowed to Narayana, the best of men, Devi Sarasvati. Vyasa is said to have been added when Ugrasrava Sauti (also known as Lomaharshana), one of the four disciples of Bhagwan Veda Vyas was narrating the Mahabharat and began after praying to his Guru.

There are three renditions of Mahabharat – Jay by Bhagwan Veda Vyas comprising of 8800 shlokas, Bharat narrated by Rishi Vaisampayana consists of 24000 shlokas and the current version which we read today has been composed by Rishi Sauti consisting of 100,000 shlokas.

Bhagwan Ganpati agreed on the condition that Bhagwan Vyas would narrate the Mahakavya continuously without stopping at the speed at which He was writing. The latter said that he would accept the former’s condition but Bhagwan Ganesh should write the shloka only after comprehending it fully.

Bhagwan Vyas then began narrating the shlokas in an encoded or riddle form (kut shlokas) which Bhagwan Ganesh had to decode and write. Thus, the former bought time while the latter decoded them before writing.

Thus, only Bhagwan Veda Vyas, Ganpati, and Rishis Vaisampayana and Sauti were the only four people capable of decoding the original 8800 shlokas of the Mahabharat which were in riddle form.

Rishi Vaisampayana then narrated the tale to him and with each parva he kept getting cured and at the end of the 18th day after the narration of the 18th parva the king became fully cured. Rishi Ugrasrava Sauti narrated the Mahabharat at Rishi Shaunak’s intellectual meet in Naimisharanya.

What does Mahabharat deal with?

It is a mirror of the society reflecting the society’s character and not only of the period in which it is set but of the human society at all times. In other words, one will find even today’s society reflected in it in some form or the other. It presents a factual representation of good and evil as it carries the grey shades too.

It deals with the struggle between choosing the self and the society in addition to that between greed & sacrifice and virtue & vice.

Mahabharat is divided into 18 parvas (parts) as follows: 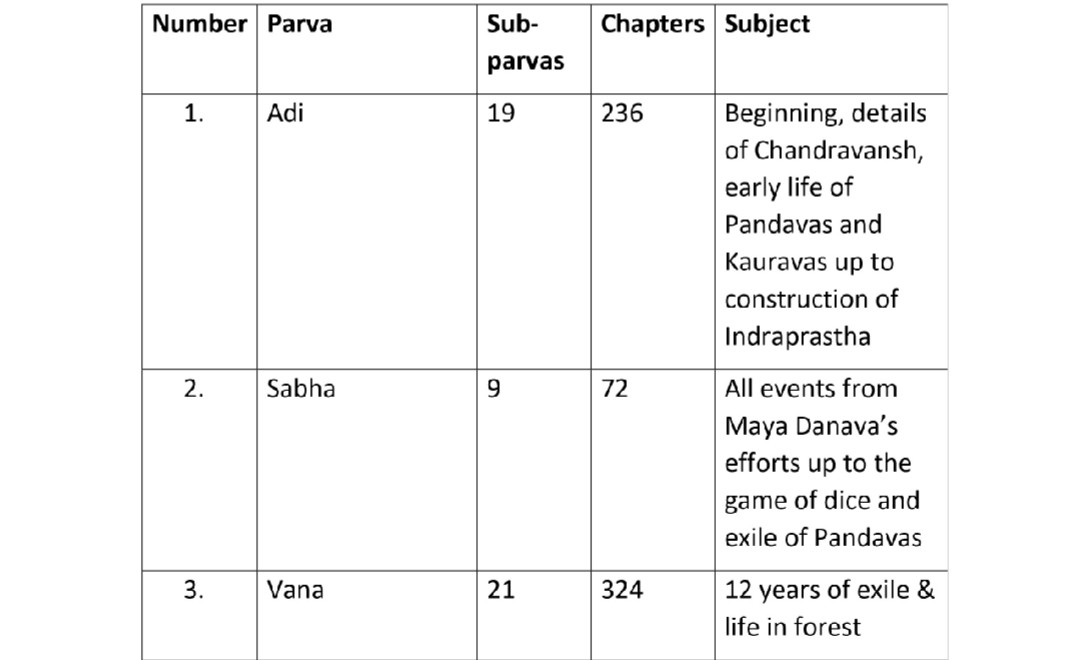 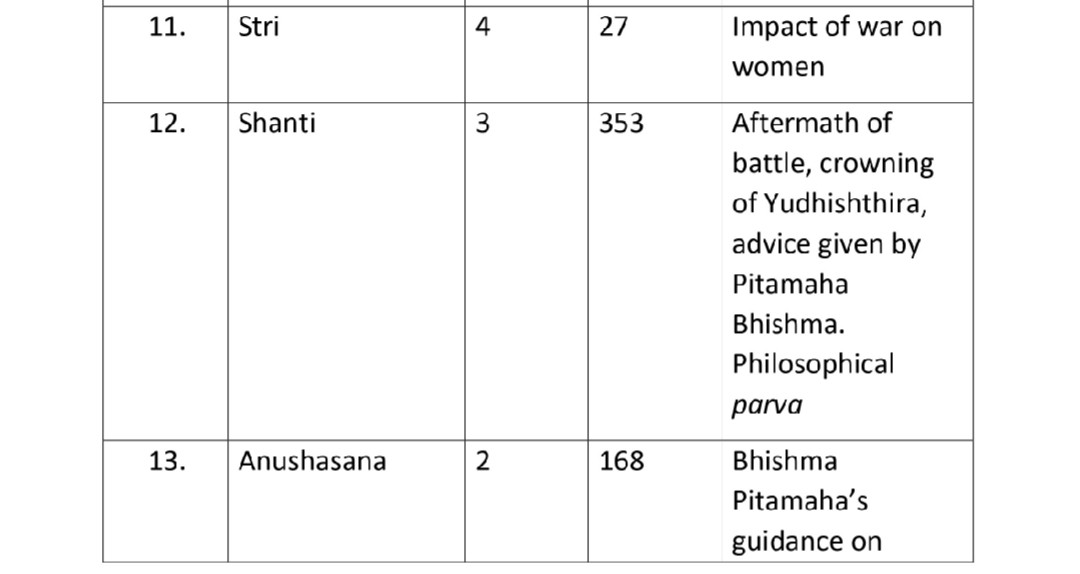 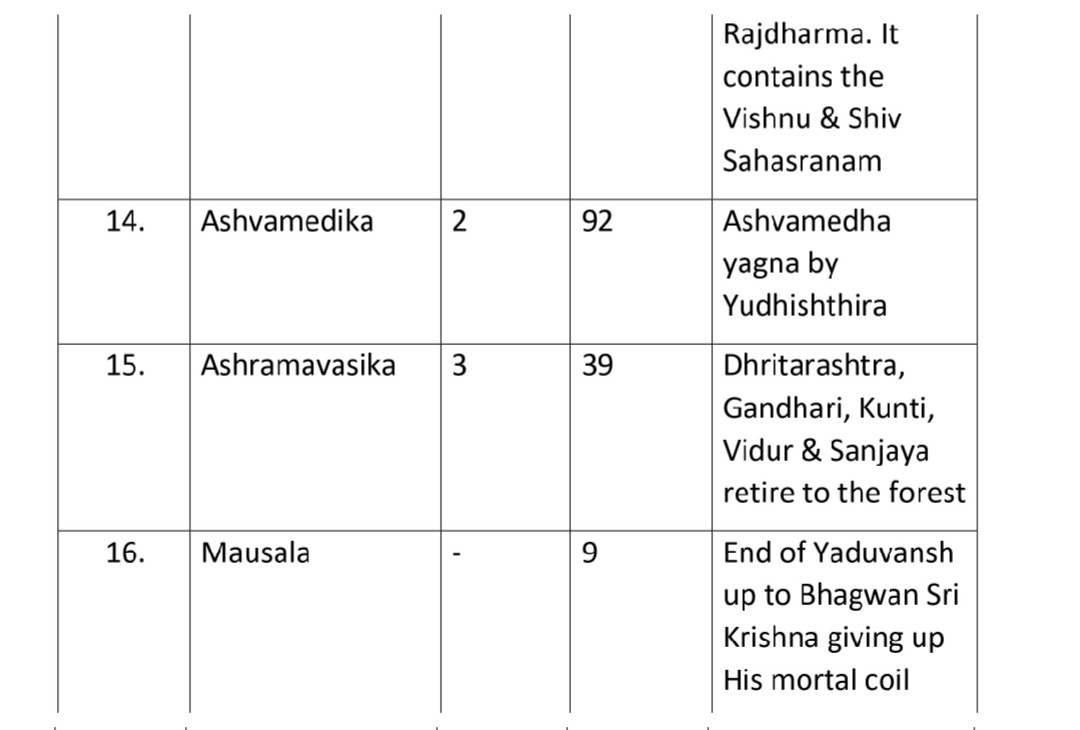 Khil Parva is a supplementary parva containing the Harivamsa meaning the lineage of Hari (Bhagwan Krishna). It is also known as Harivamsa parva or Harivamsa purana. It is a Sanskrit work in the anustubh metre with 16,374 shlokas.

He says: In matters of the purusharthas, namely Dharma (righteousness), Artha (economics), Kama (desires) and Moksha (liberation), whatever has been said here is all that exists or holds true and what isn’t found here doesn’t exist anywhere else.

In other words, Bhagwan Veda Vyas has covered every important worldly topic here directly or indirectly and either in detail or briefly.

It is my firm opinion that the Mahabharat should be the starting point for every Hindu who wishes to lead a happy life while simultaneously working one’s way up the Dharmic ladder. The importance of Mahabharat also lies in the Bhagavad Gita which we shall be seeing in the subsequent part of this series.