Ramayana – the first Hindu itihas in the form of Mahakavya 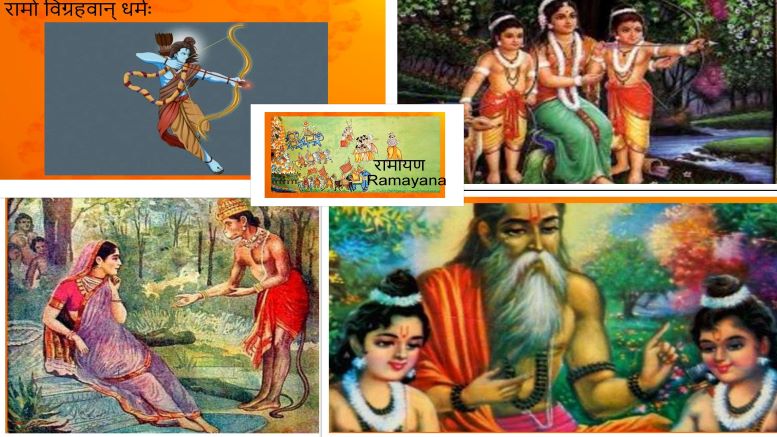 These are Smriti granthas (read parts 1, 2, 3, & 4 here) that carry essential life lessons for every Hindu. The main version of Ramayana is known as Valmiki Ramayana and several folks, as well as regional versions, have been composed as a derivative of the Valmiki Ramayana.

How Ramayana came to be the Adikavya

The opening line of Ramayana says:

Not only the birth of the Ramayana Mahakavya but also that of poetry in Sanskrit itself lies in these verses.

Once Maharishi Valmiki, while on his way to the river for bathing, witnessed a hunter killing one bird from a pair of mating Krauncha (crane) birds. He then cursed the hunter by uttering the above verse which means “Oh hunter! Having killed one from a pair of unsuspecting cranes (Kraunchas) who were engrossed in the act of love, may you not attain glory for very many years to come”.

The pain and agony of seeing a defenseless bird being killed by the hunter aroused such emotions in Maharishi that his pain poured out in the form of a shloka. Dev Muni Narad narrated Bhagwan’s life story to show how virtue annihilates vice when he once paid a visit to the Maharishi’s ashram (hermitage).

This story was later penned down by Maharishi Valmiki who became the Adikavi (first poet) and Ramayana became the Adikavya (first poem). Ramayana is a combination of the words Rama (the Hero of the Mahakavya) and aayana (His journey). Thus, Ramayana translates to the journey of Prabhu Sri Ram (रामस्य अयनं).

The structure of Ramayana

Maharishi Valmiki composed the Ramayana in the Anushtup Chhanda (meter) comprising of 24000 shlokas in the Sanskrit language. It must be mentioned here that the first syllable of every thousand words when read together forms the Gayatri mantra and hence it is known as the chaturvimshatisahastri Gayatri mantra.

The Valmiki Ramayana is divided into 7 Kandas (chapters) with each comprising of several sub-chapters known as Sargas where a specific event of the life of Prabhu Sri Ram is narrated. The Kandas and the number of Sargas in each are as follows:

Note: According to some scholars Uttarkanda was a later addition

Adhyatma Ramayana was written by Bhagwan Vyasa. This version talks about the Vedanta philosophy contained in Ramayana. Ramopakhyan is the version of Ramayana that has been told in Mahabharata’s Van Parva. Agastya Ramayana and Prabhu Sri Ram’s life story in Bhagvat, Agni, and Vishnu Puranas are the other versions of Ramayana in Sanskrit.

Some of the popular regional versions of Ramayana are listed below along with their dates.

One can find versions of Ramayana in many countries including Burma, Indonesia, Cambodia, Laos, Philippines, Sri Lanka, Malaysia, Japan, Mongolia, Vietnam, and China among others which were influenced by Bharat and Sanatan Hindu Dharma.

As said in the Ram Raksha Stotra

Meaning – The story of Prabhu Sri Ram is written in four billion words, but reading even one letter of that destroys all great sins. Even today Prabhu Sri Ram is an inspiration for Hindus in particular and humanity in general whose administration or Ram Rajya is considered the ideal one. Ramayana is a must-read to understand how to deal with life’s ups and downs.