Vedangas – the limbs of the Vedas 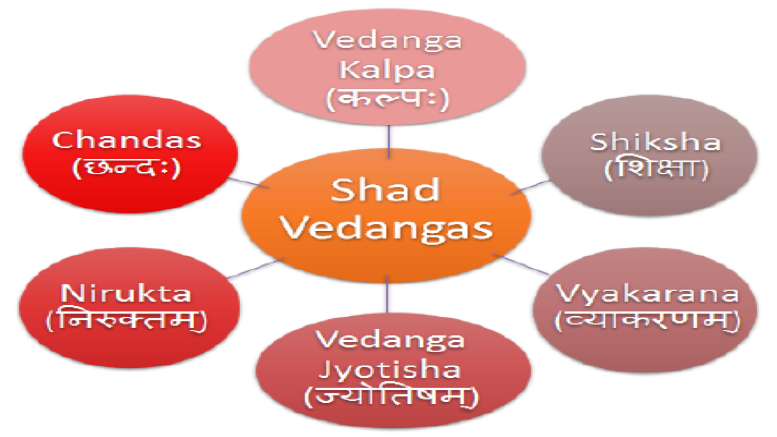 In the third article in this series (Read Part 1 & Part 2 here), we shall deal with the Vedangas and Darshanas which are important to understand the Vedas. Although a later construct, they are significant today because they help in both knowledge and application of the Vedas.

There are three important aspects of any mantra, namely Rishi, Chhanda, and Devata. Rishi (seer) is the mantradrashta who has made the mantra available to society. Chhanda (metre) is the tone, tune and pronunciation method in which the mantra is to be chanted. Devata is the Bhagwan (deity) who activates the mantra.

There are six disciplines which must be studied to make the Vedas active. These six disciplines together are known as Vedangas. They are – Vyakaran (grammar), Shiksha (recitation), Kalpa (how to perform any anushtana), Chhanda (pattern), Nirukta (meaning), and Jyotisha (astrology).

Vedangas literally means limbs of the Vedas and they are so known because without them the knowledge of the Vedas would be lost forever as their study would have become impossible in view of the conditions that arose.

The following verses from Paniniya Shiksha illustrate the importance of Vedangas by comparing them to the limbs of the human body.

Using the symbology of limbs for Vedangas is meant to point out the inter-dependence and integrity or oneness of these disciplines with each other and with the Vedas as a whole.

The need for these disciplines came up when the Vedas had to be written down or documented. In earlier times documentation was not needed as it was a part of their nitya karmas (daily routine). However, later certain circumstances caused a set back to the studies and recitation of the Vedas. Hence, scholarly rishis developed the Vedangas to help commoners understand the Vedas and ensure their proper recitation and application.

Let us look at a situation where a particular Yagna has not been performed for several decades and someone intends to perform it today, then they would need guidelines regarding various aspects such as the kind of fire altar to be erected, mantras to be chanted, the number of priests required etc. It is for this reason that the Vedangas are important because in their absence it would be impossible for anyone to perform the Yagna.

Chhandas is the metre meant to maintain the rhythm of the mantra. It refers to the pattern in which one must recite any mantra. Each chhanda has a particular effect on the mind, body, and the surrounding environment.

The shrauta karmas are to be performed at the set time exactly. Jyotisha wasn’t confined to astrology alone but included astronomy as well. To perform any karma or yagna it was necessary to know the about the movements of the sun, moon, and other planets as also that of nakshatras or constellations. They had to be well-versed in the calendar of the sky. Hence, they used to study the planetary movements and note them down thereby giving rise to the Jyotisha shastra.

Vyakarna gives us an idea about the structure and constitution of the language. Acharya Panini codified Sanskrit grammar through his observations of Vedic and spoken Sanskrit. His Ashtadhyayi talks about verbs, compounds, derivatives and other aspects of Sanskrit grammar. His lead was followed by later grammarians.

Shiksha Vedanga deals with the pronunciation. In Sanskrit, every alphabet has a specified pronunciation technique. Some are pronounced from the throat, others from the mouth, some may be nasal while certain alphabets may be resounding and so on.

Kalpa Vedanga is the Vedanga which deals with how an anushtana is to be performed. Shrauta, Grihya, Dharma and Shulba sutras are the four texts of Kalpa Vedanga. Brahmana texts interpret the mantras from the viewpoint of karma while Kalpa elaborates on the procedural details of the mantras. Shrauta sutras are related with sacrificial ceremonies, Grihya sutras deal with domestic ceremonies, the religious and social laws are contained in the Dharma sutras and the Shulba sutras contain information regarding rules of measurement of fire-altars and other construction-related rules.

Having introduced readers to Vedangas we hope that we have kindled the reader’s interest in the Shruti granthas. We shall take a brief look at the six astika darshanas (six theist schools of Hindu philosophy). Suffice to say here that Charvakas, Jaina and Buddhist philosophies fall under the category of nastic darshanas.

Astika darshanas are those philosophies that believe in the Vedas and Karma-kandas in addition to the faith in the existence of Devis and Devatas. The six main darshanas are Sankhya, Yoga, Vaisheshika, Nyaya, Purva Mimansa and Uttara Mimansa (Vedanta). Akara (source book), Bhashya (commentary) and Nibandh (essay) are the three books of any Darshana.

Darshanas mainly deal with four subjects – nature of the supreme being known as Brahman, qualities or characteristics of jivatma (soul), creation of the universe and moksha (liberation from the cycle of births and deaths).

Uttara Mimansa or Vedanta is one of the most widely studied schools of philosophy. There are five branches of Vedanta each attributed to an acharya or guru who founded it. Bhagwan Adi Shankaracharya founded Advaita, Bhagwan Ramanujacharya founded Vishista-Advaita, Dvaita school of Vedanta is attributed to Bhagwan Madhavacharya, Shuddhadvaita is associated with Bhagwan Vallabhacharya and Bhagwan Nimbarkacharya is the founder of Dvaita-Advaita Vedanta.

This brings us to the end of the Shruti granthas and in the subsequent part of this series we shall learn about the smriti granthas. As already stated, we have merely touched upon what the shruti granthas and their subject matters are. These granthas require the guidance and supervision of a Guru, unlike the smritis which can be learnt through self-study as well.