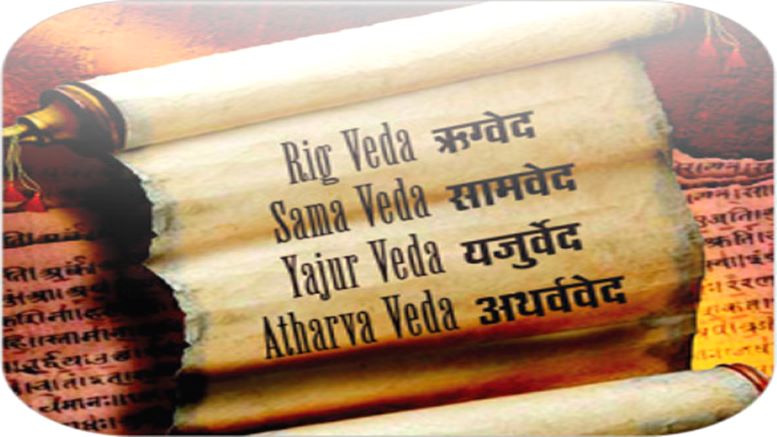 Hindu Dharma is similar to a vast ocean where each individual can take a dip and come up with a different gem every time. The Rishis (seers) have left a treasure trove of knowledge in the numerous granthas and sahityas that form the Vedic literature.

As the wise say it is certainly not humanly possible to master all that knowledge in a single lifetime and attempting to do that would be nothing but folly. What we are about to attempt in this series on Hindu granthas is to introduce readers to the various literature that forms a part of the Hindu Dharmic Granthas; in other words, we will provide a glimpse of the vast knowledge of our ancestors which Maharishi Ved Vyas compiled for our benefit.

We shall be taking a look at the religious granthas that shaped our glorious Santana Hindu Dharma in this series on Hindu granthas. It must, however, be mentioned here that for our acharyas and munis who compiled the so-called non-religious literature, inspiration always came from the Vedas and it is very difficult to separate the religious and non-religious in the Hindu Sanatan tradition.

As most of us are aware, earlier knowledge was passed on orally from generation to generation. However, by the time the Kaliyuga commenced the retention capacity is said to have decreased. Therefore, Maharishi Ved Vyas decided to make it available in the written form.

The Hindu granthas, besides being classified as religious and non-religious, are divided into Shrutis (that which is heard) and Smritis (that which is recalled or remembered). The Vedas, Upa-Vedas, and Vedangas are collectively known as Shrutis while Smritis comprises of all those kinds of literature which are a derivative of the Shrutis or have been compiled by acharyas, rishis, and munis based on their understanding and experience of the Shrutis.

Shrutis – Vedas and its allied granthas

The term Vedas is derived from the root word Vid which variously means to know, think, obtain, and/or discuss. Vedas form the foundation of Bharatiya tradition and culture and are said to contain all the knowledge relating to both the spiritual as well as the mundane human life.

Meaning – the scripture, which describes the divine method for obtaining what is desirable and for giving up what is undesirable, is called Veda.

According to Rishi Apastamba “Veda is the name given to the Mantras and the Brahmanas”.

Samhitas contain the mantras and deals with the recitation of the mantras. Brahmanas are the ritual portion of the Vedas and consist of commentaries that interpret the Vedic mantras in relation to the rituals.

Aranyakas are the scriptures that bridge the gap between the Karma and Jnana Kandas. It contains the experiences of the rishis who have worded the yagna after internalizing them. In simple words, Aranyakas are the explanation of the rituals. The philosophical part or the essence of the Vedas forms the Upanishads.

Bhagwan Ved Vyas (Krishna Dwaipayana) compiled the four types of mantras into four Samhitas and passed on one each to his four disciples for the continued preservation of the Vedas.

Rigveda was given to Rishi Paila, Yajurveda to Rishi Vaishampayan, Samaveda to Rishi Jaimini, and Atharvaveda to Rishi Sumantu. It must be mentioned here that by the time of this distribution, a large portion of the Vedas had already been lost.

If what we have received is in itself so vast, then the granthas in their entirety must simply be mind-blogging.

The Rigveda is the oldest Hindu scripture containing the ruchas (prayers) which are the hymns of praise. The Rigvedic Samhita comprises of 64 chapters and it deals mainly with the divine (Vedic Devtas) and nature-based topics.

It is known as the Veda of the yagna as it encompasses all the details regarding the ritual of yagna. It is divided into Krishna (dark) and Shukla (white) Yajurveda. Yajurveda is derived from the word Yajuh meaning in prose form.

Brahmanas:  Shatapatha (Kanva and Madhyandina) belong to Shukla Yajurveda and Taittiriya, Maitrayani, Kathaka, and Katha-Kapisthala are the Krishna Yajurveda Brahmanas

Upanishad: Brihadaranyaka and Isha are Shukla Yajurveda Upanishads while Taittiriya, Katha, Shvestashvatara, and Maitrayaniya are the Upanishads associated with Krishna Yajurveda.

The Veda which relates to the singing or the gayan vidhi (recitation of hymns) is known as Samaveda which is derived from the word saaman meaning to sing. The three surviving branches of this Veda are Kauthuma, Jaiminya, and Ranayaniya.

Upaveda: Gandharvaveda (the science of music, dance, and other art forms)

Atharvaveda which derives from the word Atharvan denotes direction and encompasses mantras which are by and large concerned with warding off evil and hardships as well as curing diseases. This Veda also contains philosophical thoughts. Only the Pippalada and Saunaka branches of Atharvaveda are extant today.

Aranyakas: Unfortunately there are no aranyakas of Atharvaveda surviving today

In this article we have merely introduced the readers to the shruti granthas which have been compiled by Bhagwan Ved Vyasa who was also known Krishna Dwaipayana and was born to Rishi Parashar and Devi Satyavati.

There is more to come in this series but here is something interesting. Shri Krishna Dwaipayana or Bhagwan Ved Vyas is believed to be one in a long line of Vyasas who compiled the Vedas in the current Manvantara known as Vaivasvata.