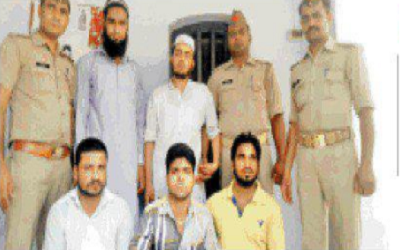 A WhatsApp message allegedly containing objectionable remarks against the prophet of Islam (Muhammad) became the cause of a attack on a Sikh family and vandalism of a Gurudwara in Rehad village, Bijnore district, UP.

According to the Dainik Jagran report –

“The WhatsApp message was received by Shanu, son of Ghulam Nabi, on Saturday evening. He informed other Muslims in the village about the alleged inflammatory message, and soon a large mob descended on the house of Swarn Singh, accusing his son of spreading the message. The mob vandalized the house and beat up family members – Swarn Singh, his brother Sukhdev Singh, neighbors Baldev Singh and Dalip Singh suffered injuries in the attack.

When other members of the Sikh community rushed to Swarn Singh’s house, the mob shifted to the main market where they started forcing shops to shut down. Police was finally able to bring the situation under control. Later, both groups assembled at the police station.

Based on the assault complaint lodged by Swarn Singh, police have filed cases against 12 known and 6 unknown persons; 5 of those named were arrested by Sunday morning – Rashid s/o Mohammed Zakir, Akram s/o Ghulam Nabi, Zeeshan s/o Zulfikar, Aman s/o Dilshad, Imran s/o Ayub. Others against whom the complaint was lodged are Qasim s/o Mehboob, Arshad s/o Bhura, Shamim s/o Mohammed Ali, Mohammed Farhan s/o Bhure Shah, Rehan, Faizan and Aashique all sons of Mehboob. From the other side, Shanu has lodged a complaint against unknown persons for spreading the allegedly objectionable WhatsApp message.”

The mob is also reported to have damaged the boundary wall of a Sikh Gurudwara in the village.

Allegations of blasphemy against Islam would be one of the leading causes of communal rioting across the world, not just Bharat. At times, the alleged blasphemous message is just a ruse to justify an attack on the non-Muslim community. Some recent incidents which reflect this malaise –

1.) Birbhum, West Bengal – Rampaging Muslim mob attacked police demanding that the author of an allegedly anti-Islam Facebook post, Sujan Mukherjee, a 3rd year engineering student who had been arrested by the police, be handed over to them.

3.) Coimbatore, Tamil Nadu – A Muslim atheist was hacked to death for posting an anti-Islam message on Facebook.

4.)  Hub, Pakistan  –  A Hindu trader was arrested after being framed by his Muslim rival for sharing a blasphemous message on WhatsApp.

5.) Ghaziabad, UP – 6 people were killed and 2 policemen critically injured when a Muslim mob stormed a police station in protests over alleged Quran desecration

6.) Kamlesh Tiwari was locked up for over an year after some alleged remarks against the prophet of Islam. Even though he was promptly arrested by the Samajwadi Government of UP and slapped with the draconian NSA act, massive country-wide protests broke out with Islamists demanding death penalty for Kamlesh Tiwari.

And this problem of Islamist mob violence has worsened since the advent of social media which has democratized opinion sharing and opened by previously taboo topics. Abuse and ridicule of Hindu Gods and Goddesses is seen frequently on mainstream and social media. But in most cases, the Hindu response is to either ignore the abusers or lodge police complaints. For eg. when Lutyenite Prashant Bhushan had denigrated Sri Krishna as a ‘legendary eve-teaser’, Hindus condemned his remark and a BJP spokesperson lodged a police complaint – of course, even this legal recourse was categorized as ‘intimidation’ and ‘suppression of free speech’ by the likes of Sadanand Dhume!

In another case, Bajrang Dal in Shamli, Western UP filed a hate speech complaint for some extremely abusive and vulgar Facebook comments against Hindu Goddesses by one Nadim Malik Kandhlavi and others. Recently, we had seen protests by Hindu groups in Bhadrak, Odisha against police inaction over offensive anti-Hindu Facebook posts by 3 Muslim youth. The situation only spiraled out of control after police soft-pedaled on the issue and failed to take action as per the law of the land (IPC 295-A, 153).

What has happened in Rehad, Bijnore is not the first or last time we will hear such accusations of blasphemy to justify naked Islamist aggression. When will our nation debate this burning issue with the same energy devoted to the beef and intolerance debates?