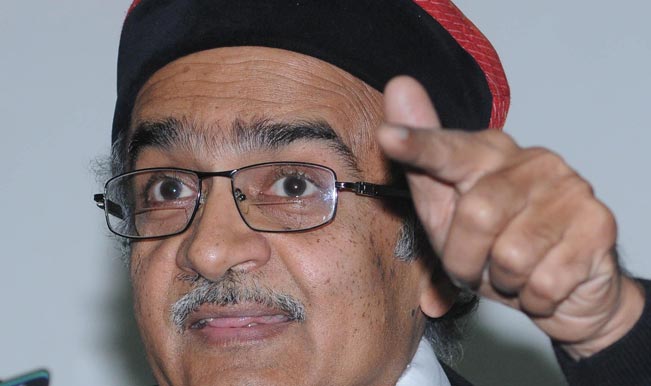 In a tweet that inadvertently reveals the Hinduphobic mindset of the garden-variety left-liberal that breeds in the heart of Lutyens’ Delhi, senior lawyer Prashant Bhushan called Bhagwan Krishna a ‘legendary eve-teaser’ while criticizing the anti-Romeo police squads set up by UP’s new CM Yogi Adityanath to crack down on sexual harassment that is rampant in UP, and especially West UP.

Bhushan’s tweet tells us two important things – (1) How his ilk belittles a genuine problem like women’s safety, only because admitting the truth exposes the real face of a ‘secular’ party like SP which ruled UP for 5 disastrous years. (2) The perversion of the liberal mind, indoctrinated by Abrahamics, wherein Sri Krishna’s playful and consensual behavior with gopis is equated to the stalking, humiliation and predatory sexual targeting that girls & women in Western UP have been subjected to over the last few years.

If Bhushan had merely protested against the use of the term anti-‘Romeo’ or ‘eve teasing’, he would have been justified – both terms are reflective of the colonial consciousness that our political-legal-policing systems are yet to fully emerge from. HinduPost strongly supports the view that ‘eve teasing’ is a misleading term for what is nothing but sexual harassment – as such, the squads should be called anti-harassment or women’s safety squads.

But Bhushan’s intent was clearly to mock Hindu sensibilities and to insult the Yogi for daring to take such a bold step to safeguard women’s honor, ignoring secular protests. Practising Hindus need to realize that this Hinduphobic epidemic is not limited to Prashant Bhushan & secular politicians alone – even an acclaimed Bollywood director like the late Manmohan Desai was full of such bile for Sri Krishna.

Bagga said he has written to the police asking for a case to be filed against Bhushan under India Penal Code sections 153(a) and 295. A lawyer’s NGO called ‘Hindu Legal Cell’ also filed a complaint against Bhushan for hurting Hindu religious sentiments, and is planning to raise the matter in courts too.

Many were also wondering why authorities had not taken suo moto action against Bhushan till now, the way Kamlesh Tiwari was jailed under the draconian NSA for his alleged defamatory comments against the prophet of Islam – maybe it was due to the fact that Tiwari’s comments had seen large Muslim mobs across the country baying for Tiwari’s blood, and secular parties had even made demands for his hanging inside the UP assembly?

Realizing the potential damage to his reputation, Prashant Bhushan went into damage control mode and tried some word jugglery to wriggle out of his clearly insulting comment aimed at Sri Krishna – 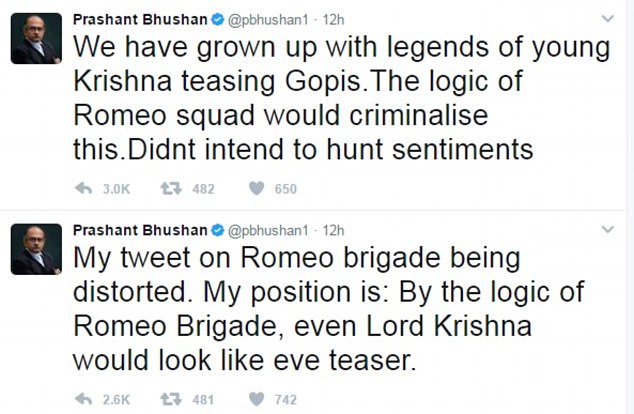 So, Bhushan’s defense is to say that the sexual harassment which school & college going girls in UP face on a daily basis from louts & anti-socials, is similar to the interaction between Krishna and gopis. Such propaganda wherein Bhagwan Krishna is depicted as a womanizing, lecherous thief, is a common tactic adopted by missionaries and other Bharat-bashers, and the same mindset has successfully infiltrated into Lytuens’ Delhi liberal circles.

The spiritual significance of Sri Krishna’s Raas Lila and other aspects of his life is beyond minds which have been brought up on a noxious mix of imported ideologies, and they can never appreciate the bhakti-bhav which continues to draw millions of devotees to Vrindavan.

@Uniting_India wow, what about your Gods having sex? Brahma rapes saraswati, Krishna the womanizer, etc and etc

Incidentally, some of the other causes supported by Bhushan include Naxalism, Kashmiri separatism, opposition to terrorist Ajmal Kasab’s hanging for 2008 Mumbai attacks  – in short, any and all actions by #BreakingIndia forces.

Bhushan is also a leader of Swaraj India party, which he along with his associate Yogendra Yadav floated in October last year after being expelled from Aam Aadmi Party. Yogendra Yadav tried to come to the aid of his beleaguered colleague by trying to muster some sympathy for him online –

This Krishna painting always greets you as you walk into Prashant Bhushan's house. pic.twitter.com/fmkgyRmazW

But twitter was having none of it, having grown weary of such tactics by known Hindu-baiters –

As this tweet expresses – “Every single Left Liberal, whatever his name sounds like, draws his hate for Bharatiyata and Indian Union from his Hindu hatred”

While Bhushan and his left-liberal cabal are taking potshots at Yogi Adityanath for his crackdown on sexual harassers; while mainstream media anchors like Zakka Jacob are holding talk shows like “No Ishq, No meat” in “Yogistan”…hear how the women of UP are praising the much-improved safety environment after the new police squads on the ground –

Women Citizens from UP on #AntiRomeoSquadpic.twitter.com/3zQ3hBhkKu

Understanding inner self and liberation through the Bhagvad Gita