Demands For Hanging Kamlesh Tiwari In UP Assembly – Dawn Of Shariah? 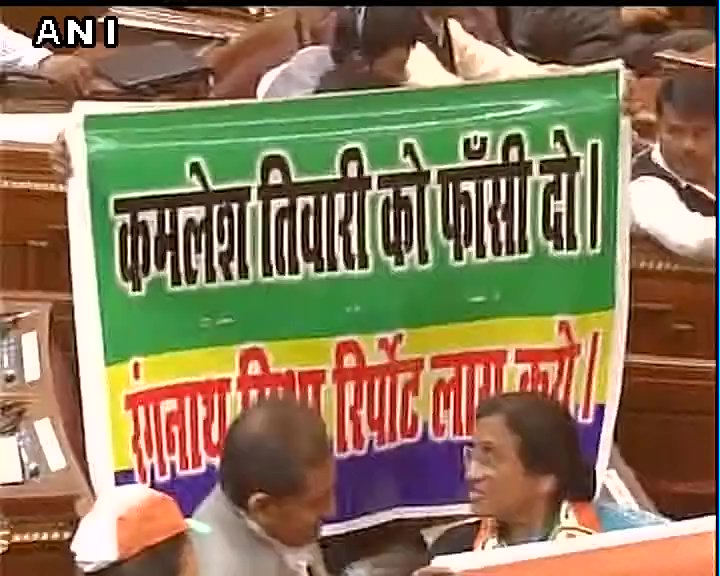 In a shocking development, MLAs of Congress, BSP and RLD were seen holding banners demanding “Kamlesh Tiwari Ko Phansi Do” (Hang Kamlesh Tiwari) during protests against the Governor’s speech in the UP Assmebly.

In the mad rush for pandering to Muslim fundamentalists and garner the Muslim vote-bank, ‘secular’ parties in Bharat have now gone to the extent of demanding capital punishment for a Hindu without due trial.

Kamlesh Tiwari was arrested in Lucknow for his allegedly derogatory remarks against the founder of Islam, and is currently lodged at the Lucknow District Jail. A case under IPC sections 153-A (promoting enmity between groups on ground of religion and doing acts prejudicial to maintenance of harmony) and 295-A (deliberate and malicious acts, intended to outrage religious feelings of any class by insulting its religion or religious beliefs) was registered against Tiwari. Neither of these sections of the IPC mandate the death penalty. The maximum punishment prescribed for both these offences, once the crime has been proven in court, is as below –

Either our ‘secular’ lawmakers in UP are ignorant about the law, or they are accepting that Islamic shariah law on ‘blasphemy’ is higher than the law of Bharat. And the ‘freedom of expression’ activists are conspicuously silent on this frightening build up to lynch Kamlesh Tiwari.

As perceptive observers on social media are saying – is it time to junk ‘Secularism’ and the Nehruvian ‘Idea of India’ which has reduced our polity to this sorry state?