After going through various extremely insulting abuses of Hindu deities on Facebook, Bajrang Dal Shamli, Uttar Pradesh filed an FIR against the abusers. The main accused’s name is Nadim Malik Kandhlavi and he belongs to Kandhla in Shamli district. While some of other accused have been arrested, Nadim is absconding. It seems that Nadim was repeatedly abusing Hindu gods and goddesses with derogatory terms and he had several outbursts of  extreme profanity on social media targeting Hindu deities.

The Bajrang Dal Shamli team, under the leadership of Vivek Premi, also submitted the proofs to Shamli SP. The FIR has been filed under sections 295 A, 153 A and 66 D. The following proofs were submitted to the SP regarding the case : (WARNING: below FB posts contain extremely crude and sexually abusive language that can offend and upset; view with discretion) 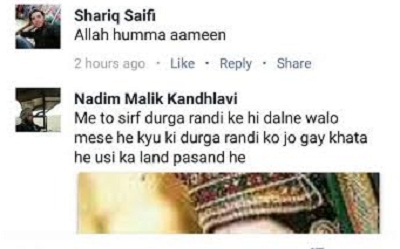 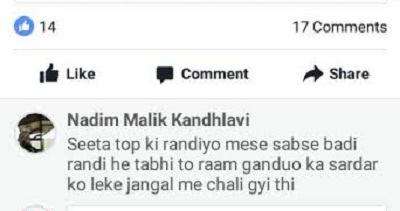 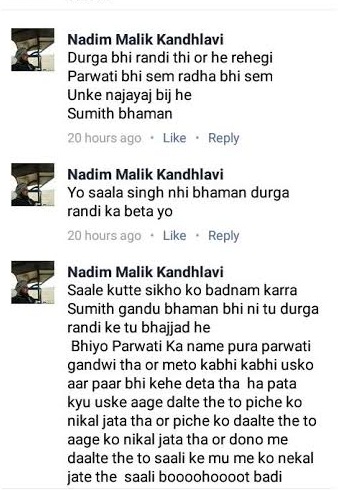 Bajrang Dal Shamli is eagerly waiting for police to find the culprit for the extremely vulgar comments and insult to Hindu Dharma. The SP has given assurance that the accused will be arrested soon.

We have many examples of hate speech cases on Hindus earlier, like Kamlesh Tiwari, Sadhvi Prachi, Ashu Parihar etc, for much less vicious statements on other religions. Some of them like Kamlesh Tiwari had been locked up under NSA for many months.