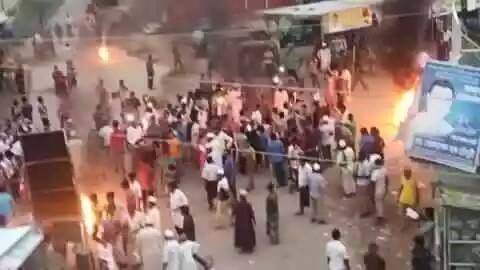 Bangladeshi Hindus have been facing the brunt of rampaging Islamist violence for over a week now. The violence started on Diwali day, 30 October, when an unruly mob of hundreds of Muslims armed with locally-made weapons demolished at least 10 temples to the ground along with vandalising hundreds of houses of the Hindu community at Brahmanbaria‘s Nasirnagar upazila.

The attackers also beat up over 100 people of the minority community. The attackers ran amok through eight Hindu localities, including Kashipara, Daspara, Ghoshpara, Duttapara and Nomoshudropara, said Abdul Quader, officer-in-charge of Nasirnagar Police Station. Police have detained a total of 44 people in connection with these attacks till now.

On 3rd November, a temple at a Hindu house in Netrokona district’s Kalmakanda Upazila was vandalised. This was followed by miscreants setting fire to at least six Hindu houses in a predawn attack on 4th November in Brahmanbarhia’s Nasirnagar. Later that same day, miscreants set fire to a Hindu house in the same locality, sending ripples of fear through the community there.

Then on 5th November, a Hindu temple in Netrokona town’s Satpai neighbourhood was vandalised early morning. Police detained a man during this attack – he has been identified as 40-year-old Sumon Islam, from Narsingdi.

“One after another Hindu homes and temples are being attacked. The violence just seems to continue,” said the district’s Puja Celebration Committee Chairperson Mongol Saha Ray. “It is extremely distressing.”

The series of attacks on Hindu homes and temples have been spread across Brahmanbaria, Netrokona, Jessore, Barisal, Faridpur, Thakurgaon, Bogra and other places across Bangladesh. Many Hindu families have deserted their houses after these attacks and have taken refuge in other areas.

While coverage of these riots has been muted in Bharat’s mainstream media in line with their editorial policy of not ‘fanning Hindu extremism’, Bangaldeshi outlets and portals like currentriggers.com have covered it extensively.

It all began with a Facebook post purportedly from the account of Rasraj Das, 27, of an edited photograph that shows an idol of Bhagwan Shiva on the picture of Kaaba, a prominent Islamic religious site.

On 29th October morning, Rasraj in a Facebook post said he had nothing to do with the photo and offered an apology.

“At first, I am apologising to Muslim brothers because someone has posted a photograph from my account without my knowledge. When I came to know yesterday night [Friday] from Mamun bhai, Ashu bhai and Bipul about it, I deleted it immediately,” he said in the post.

“Here we live side by side as Hindu-Muslim brothers, and I have no such mentality and, of course, I don’t have such impudent courage. Why should I? I think no one has that mentality and no one should. Besides, our Muslim brothers provide all-out support for our different programmes … I don’t know how such a photograph was posted and who did this. So, I am apologising to all,” the post added. Interestingly, Rasraj is from Haripur Union, about 12 km from the place of the attack.

But, locals caught the youth and handed him over to the police which filed a case against him. Police then produced Rasraj before a Brahmanbaria court on 29th October, which sent him to jail. So despite such prompt action by law enforcement against the offending post and a grovelling apology by the accused, the Islamists mobs thought it fit to mete out collective punishment to the entire Hindu community in Bangladesh.

“In a similar incident, religious fundamentalists attacked the Buddhists community in Cox’s Bazar’s Ramu in September 2012, claiming that a Buddhist youth insulted Islam on the Facebook. An investigation by The Daily Star later found the Facebook post was faked to justify the attack.“

Brahmanbaria Superintendent of Police (SP) Mizanur Rahman told the Dhaka Tribune that around 150 to 200 people launched the attacks on 30th October and vandalised at least seven to eight idols of five temples in the area.

Earlier in the morning, Ahle Sunnat Wal Jamaat, an Islamic group, held a rally protesting the Facebook post in Sadar Upazila, a quarter kilometre from where the attack happened. Some locals blamed the protesters for the attack, which the rally organisers denied. They blamed some “criminals” from Nurpur village for the incident.

“A group of Hefajat-e Islam men attacked the Hindu community and vandalised their homes and temples when we were holding a peaceful rally. Islam is a peaceful religion. It never supports any clash. We demand trial of the attackers,” said Riazul Karim, convener of Nasirnagar unit of Ahle Sunnat Wal Jamaat.

SP Mizanur Rahman said a vested group carried out the attack to tarnish the government’s image. Blaming the Jamaat-Shibir (student wing of the Bangladeshi Jamaat-e-Islami, an ally of Bangaldesh’s main opposition party BNP) men for the attack, he said: “Those who were behind the attack will be arrested as soon as possible. Already we have detained six persons in this connection.”

Madrasa (Islamic school) students of the district staged demonstration at the district press club on 30th October demanding hanging of Rasraj Das. Police has also recovered a stolen idol from a mosque in the area, showing the complicity of local Muslims.

The attacks on several Hindu temples in Bangladesh were carried out under a well orchestrated plan aimed at grabbing lands of the minority community, National Human Rights Commission (NHRC) of Bangladesh had said.

The statutory NHRC said their initial investigation into the attacks on several Hindu temples and households in the central Brahmanbarhia district’s Nasirnagar indicated that they were pre-planned.

“Our investigation is still underway but our initial findings suggest that an organised quarter carried out the attacks in a pre-planned manner,” Enamul Haque Chowdhury, NHRC member and chief of a three-member fact-finding committee of the rights panel, had said.

Nasirnagar Hindu-Budhist-Christian Oikya Parishad President Adesh Dev, said, “Several devotees were injured in the communal attack and police did not interfere into the looting. A BGB platoon has been deployed but only after the damage was done.”

Several groups have accused the police of inefficiency but Home Minister Asaduzzaman Khan Kamal defended the law enforcement agency saying they intervened at the scene in quickest possible time.

Authorities, however, withdrew the officer in charge of the Nasirnagar police station immediately after Sunday’s attack. Bangladesh police has also suspended a senior officer for negligence of duty in the Bramhanbaria incident.

To add insult to injury, Awami League Minister Mohammad Sayedul Haque (Minister for Fisheries and Livestock) abused Hindus as “Maluyaner Bachyara” (children of Kafirs). Haque, who is also MP from Brahmanbaria, visited his constituency 72 hours after the Islamist attacks, and in his hate speech showed contempt for Bangladeshi Hindus worried about their safety and also intimidated the media for covering the attacks.

Bangladeshi journalists like Syed Badrul Ahsan, who is Associate Editor of ‘The Daily Observer’ are also criticizing the Government machinery for its abject failure to protect Hindus, and is calling upon PM Sheikh Hasina to take stern action.

What next for the Hindus in Bangladesh

If this is the plight of Hindus in a ‘secular’ Bangladesh under a Bharat-friendly Awami League government, one shudders to think of what would unfold if the opposition BNP were to come into power.

Even those Bengali Hindus who decide to migrate from Bangladesh and cross over into West Bengal, find to their dismay that the situation in West Bengal is as bad – Islamists arguably wield more power under ‘secular’ Mamta Banerjee as compared to their influence in Bangladesh.

Even the Government of Bharat is wary of speaking up against the atrocities being perpetrated on Hindus in Bangladesh, as it fears destabilizing the Sheikh Hasina government which has at least taken action against genocidal Jamaat-e-Islami leaders and supports Bharat in its war against Pakistan-exported terror.

First and foremost, Hindus everywhere in the world have to realize that we are being persecuted for being followers of Hindu Dharma in places like Pakistan, Bangladesh, West Bengal, Kerala, Malaysia etc. We have to share the pain with our Hindu brethren who are under attack, support organizations working for Hindu human rights, and put pressure on our respective Governments to act against those persecuting Hindus.

Sooner or later, the Government of Bharat has to take a clear stance on being the foremost defender of Hindu human rights across the world – and their battle must begin at home, in Bharat, where Hindus are legally discriminated against in education, in control of religious institutions and myriad other ways. We have to remove the Nehruvian secular blinkers and realize that there is nothing unethical or immoral in the birthplace of Dharma – Bharat – standing up for Dharmic causes across the world.

United for humanity: The 1971 Concert for Bangladesh