Mamta Banerjee Has Given Free Reign To Islamists In West Bengal 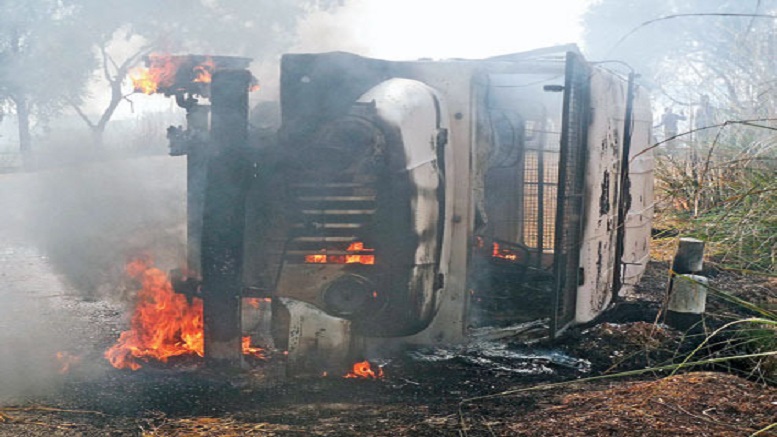 Muslim extremist mobs are now functioning with complete impunity in West Bengal. They fear no one, not the police, nor BSF, and definitely not the State of Bharat. Today, the West Bengal police is heavily demoralized due to the repeated assaults and humiliation meted out to them by Islamist mobs, who have the full backing of the ruling TMC party. In their latest show of brute strength, a mob of Muslims ‘torched two police jeeps, assaulted cops and vandalised and laid siege to a police station in Birbhum’s Mayureswar, prompting officers to flee.’

This is the chilling bit from the above report –

“An officer later said the police in Birbhum were under “strict instructions” from higher authorities not to use force, which is why there was no resistance.
In the past two years, the police have come under attack several times in Birbhum, causing the death of one officer in 2014. District police sources said the force had lost its morale because of alleged political backing enjoyed by the attackers and resistance to action.”

This was not the first assault on the State of West Bengal, and doesn’t look like it will be the last. From brazen rallies in support of a Bangladeshi war criminal convicted for genocide, to rampaging mobs burning vehicles and sexually molesting women when a Muslim Imam is questioned – Kolkatta and West Bengal it seems are inured to Islamist violence. It is the new normal.

The unfortunate 2002 Gujarat riots which erupted after the gruesome burning alive of 58 Hindu passengers, mostly women and children, travelling in the Sabarmati Express, were covered non-stop for days on end by our national media. The actions of the then CM of Gujarat, Narendra Modi, were subject to intense scrutiny, by media & courts for over a decade – and rightly so. But why hasn’t Mamta Banerjee been subject to even a fraction of similar scrutiny?

There is documentary evidence that TMC’s Rajya Sabha member Ahmed Hassan Imran had a direct role in the communal violence that took place in Canning, South 24 Parganas district in 2013. Despite being privy to this information, Mamta Banerjee nominated Ahmed Hassan Imran, also one of the founders of the banned SIMI, to Rajya Sabha in Feb 2014. TMC cadre have shot dead police officers in broad daylight and also rented out their house to bomb-making terrorists. A sensitive border state like West Bengal has today become a breeding ground for Islamists and jihadis who want to topple the Government in neighboring Bangladesh and carve out a “Greater” Bangladesh by annexing part of West Bengal. Still, Mamta Banerjee is treated by national media like an indulgent parent treats a petulant child – no one is asking the tough questions which need to be asked if Hindus in West Bengal are to survive.

Some specific incidents like the Tuktuki Mandal abduction and Malda riots came to the fore in mainstream media only due to intense pressure from social media. And even then, some news portals tried to negate the ordeal of Hindus, or gave a vicious spin while downplaying the clear Islamist hand behind the violence.

When even an act of ink-throwing is painted as a sign of ‘growing intolerance’ in society, what should we make of these repeated assaults on law enforcement & border protection forces by large mobs of Muslims? Or are we expected to apply a different tolerance standard for Muslims, just like a different civil code applies to them? And this Islamist intolerance also extends to Muslims who they believe are acting against their Talibani doctrine. So why aren’t self-avowedly liberal Muslims like Javed Akhtar, Aamir Khan or Shahrukh Khan (the official West Bengal brand ambassador) using their public reach and position to condemn this growing Islamization of West Bengal?

At a time when even the Western media is finally reporting the rampant persecution of Hindus in West Bengal, why is there no debate happening in Bharat on this multi-pronged assault on Bengali Hindus and their beliefs? Why aren’t Bengali icons like Sharmila Tagore, who spoke so eloquently on the Dadri incident, not speaking up on this sustained persecution of Hindus and total break-down of law & order in her home state? Will President Pranab Mukherjee speak on this issue the way we were told he advocated tolerance in the wake of Dadri? And finally, why aren’t we discussing the need to enforce Article 356 in West Bengal, where the rule of law has dissipated for all practical purposes?