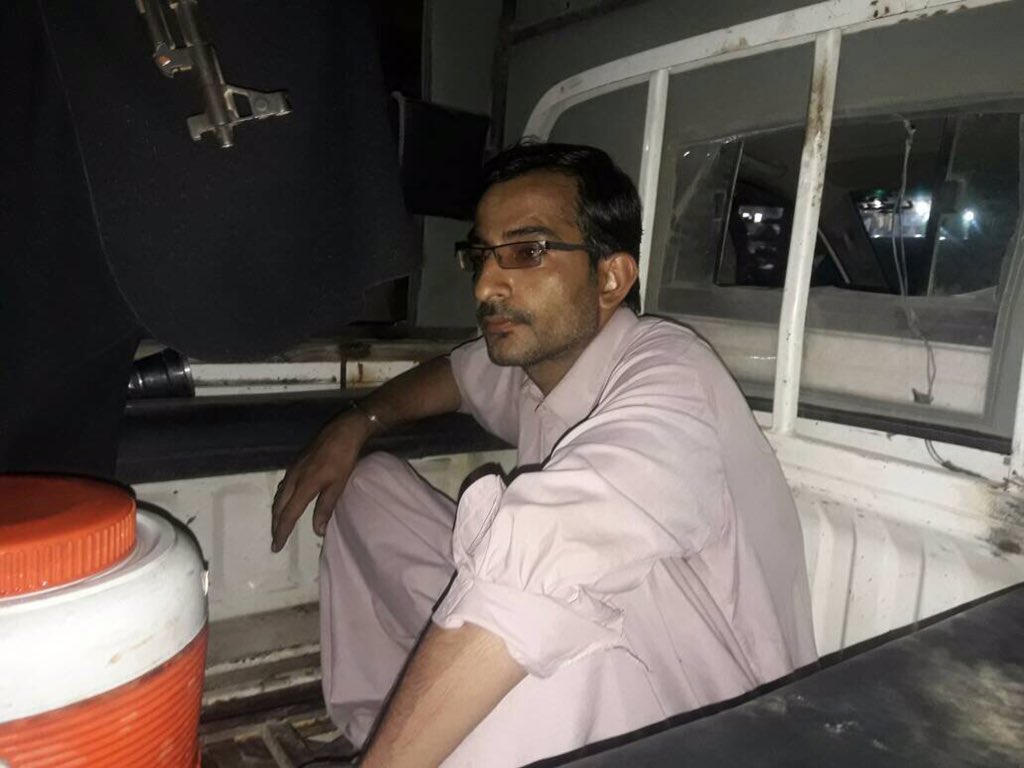 Prakash Kumar, a Pakistani Hindu in Balochistan province’s Lasbella district, was arrested for sharing allegedly blasphemous content on WhatsApp. A mob then attacked the local police station demanding that Prakash be handed over to them for ‘punishment.’ Details are now emerging which indicate that Prakash was framed due to business rivalry with a Shia Muslim who is close to an influential politician.

Prakash S/O Prem Chand, age 35 the #Blasphemy Accused, beaten by the people but rescued by the Police, now Protest outside Police station pic.twitter.com/TMc6iyJvl8

Violence erupted in Balochistan province of Pakistan after police refused to hand over a Hindu man suspected of blasphemy to an angry mob, Dawn News reported, with locals resorting to pelting stones at police when their demands were not met.

Prakash Kumar, a local business owner, was suspected of sharing a picture containing allegedly blasphemous content on WhatsApp, police officials in the town of Hub said.

A First Information Report was registered against Kumar on the complaint of various community members under Sections 295-A and 295-C of Pakistan’s blasphemy law. The suspect was shifted to Gaddani Central Jail.

An hours-long protest outside the Hub city police station turned violent, with protesters pelting stones at police, after law enforcement officials refused the protesters’ demand that police hand over the Hindu man to the community so they could administer justice themselves and ‘punish’ Kumar.

Hub City police dispersed the crowd of enraged protesters through tear gas shelling and aerial firing, and took 20 protesters into custody. Search operations were underway to arrest those suspected of inciting the mob to violence, police said.

Some police officials and a child were injured in the violence, and the child later succumbed to his injuries.The deceased boy is yet to be identified. Shops owned by members of the Hindu community were shut down and all roads connecting Sindh to Balochistan via Hub were closed for operations until further notice.

Blasphemy is considered a highly sensitive religious issue in the country and it is not the first time when accusations of blasphemy ensued into acts of violence.

A few weeks ago a vigilante mob lynched 23-year-old Mardan university student Mashal Khan over allegations of blasphemy. He was shot and tortured to death even in the presence of police whereas police high ups said that the LEA personnel present at the scene were unable to control the massive mob.

A few months ago, several bloggers were also accused of blasphemy. Some of them were allegedly kidnapped and later released. After a hue and cry on media, the Islamabad High Court took notice of the issue and ordered concerned authorities to purge social media and the internet of blasphemous content.

As per tweets by a Pakistani journalist @aliarqam, the episode involves a business issue between Prakash, who is a local businessman of Lasbella, and an outsider from Sindh who had come to Lasbella for business. This outsider is a Shia, Muslim League Youth Wing Joint Secretary and right hand of a relative of the Balochistan CM.

Prakash was earlier threatened by the rival guy that he will fix him. It appears that an audio note along with a photo-shopped ‘blasphemous’ image on WhatsApp was used as bait to level the blasphemy charge. In the audio, the speaker abuses whoever has created the image and exhorts everyone to find the person behind it by sharing the message (“Apko Allah ki Kasam” type of appeal).

Prakash received the WhatsApp forward from a Muslim acquaintance and in good faith forwarded it into a group of friends. Out of that group, somebody took a screenshot and started circulating the offending image with Prakash’s name under it. This spread like wildfire and soon a large mob was baying for Prakash’s blood.

295-C – Use of derogatory remarks, etc., in respect of the Holy Prophet:

Whoever by words, either spoken or written, or by visible representation or by any imputation, innuendo, or insinuation, directly or indirectly, defiles the sacred name of the Holy Prophet Muhammad (peace be upon him) shall be punished with death, or imprisonment for life, and shall also be liable to fine.

The law prescribes a fixed death penalty for all those who are found guilty. The option of life imprisonment was made defunct after a 1991 Federal Shariat Court judgement.

Simply put – you blaspheme, you die. No ifs, ands or buts about it. The credibility of this assertion is built on an apparently universal consensus (ijma) on the subject across all four Sunni schools of thought. By maintaining this front of scholarly consensus, the religious leadership disallows any concept of an alternative position.

This idea of a unanimous scholarly endorsement of an unwaivable death penalty for blasphemy has been relentlessly repeated: in the Federal Sharia Court Judgment on the blasphemy law in the ‘90s, in the Parliament, in the popular print and oral narrative on television channels, and has seeped deeply into the consciousness of the Pakistani population.

In the collective imagination of mainstream Pakistan, blasphemy is not a pardonable offense and anyone who believes otherwise is also committing blasphemy, and must similarly pay with their life.

This is the extent of radicalization and indoctrination of Pakistani society, which Pakophiles in Bharat like Mani Shankar Aiyer, Shah Rukh Khan, Naseeruddin Shah, Sitaram Yechury etc. claim is a ‘good neighbor’, a ‘victim’ of terrorism just like us, and a country that we can rationally engage with through dialogue. Our national security & foreign policy establishment too continue to harbor these delusions.

Will the Government of Bharat speak up for Prakash Kumar? Will Hindus of Bharat show they care by boycotting Pakistani film stars, cricketers and products?