Islamist mobs erupt in violence over Kamlesh Tiwari: Do They Wish to impose Sharia upon Bharat? Islamic apologists says that comments by a non-descript person are behind a storm of violent protests and rioting unleashed by Islamic mobs in places as far flung as U.P., M.P., New Delhi, Karnataka, Rajasthan, West Bengal and Bihar. The scale and well-planned manner in which this violence has been carried out is beyond any sense of proportion in terms of the lakhs of people deployed and the number of locations it has happened. It hints at a larger design.

To those who came in late, a statement from Samajwadi Party party leader and UP Cabinet Minister, Mr. Azam Khan, triggered the sequence of events. Mr. Khan, without any provocation, said that Hindu leaders who choose to be bachelors are homosexual and should marry Sadhvis (female holy ascetics). Most brushed off the words of Mr. Azam Khan as the usual rantings of a well known Hindu baiter.

2. Azam Khan followed up his comments by asking Sadhvis and pracharaks to marry each other terming them sexually frustrated folks

In response to this, a certain Mr. Kamlesh Tiwari in Meerut, U.P., allegedly responded by making a comment on the founder of Islam. Mr. Tiwari was arrested with unusual alacrity by the U.P. police and proceedings are being initiated against him in accordance with the Constitution of Bharat. Mr. Kamlesh Tiwari is reported to be a member of the Hindu Mahasabha, although this has been denied by the Mahasabha itself. The matter could have ended here and the rule of law allowed to take its normal course.

However, Muslim clerics have subsequently issued incendiary statements and fatwas calling for Mr. Tiwari’s head. These calls, based on Sharia principles, have no place under the Constitution of Bharat unlike Islamic Republics in Pakistan or Saudi Arabia, for example, where Sharia Laws are in force.

These calls have been accompanied by mobilization of mobs and large scale violence in several places. It started with a series of well-coordinated ‘protests’ across the country where Islamic mobs have demanded “Gustakh e rasool ki sirf ek hi saza, sar tan se juda” which literally means “There is only one punishment for those who mock/denigrate the prophet – beheading”. This demand is a common refrain within the Islamic community worldwide which are under Sharia – it is not something that has been coined in Bharat over this one incident. The ‘protests’ soon morphed into the real intent – a show of brute strength to intimidate the administration, with worrying pro-ISIS slogans as well.

These ‘protests’ have now moved to the next stage in the form of horrific rampages by unruly Muslim mobs at Kaliachak, Malda, West Bengal where police stations, BSF vehicles and of course, hapless Hindus (who are now in a minority in Malda district) were targeted. Almost the entire national media, celebrity figures like Aamir Khan and the ‘Award-Wapsi’ brigade who have expressed concern over ‘rising intolerance’ in Bharat for the last one year by giving a communal spin to law and order issues, were mute when these mobs, fueled by communal elements, went on the rampage against public property and police stations, and where Hindus property was damaged and women mistreated. Is it because this violence doesn’t fit the boilerplate template of psuedo-secularism which paints Hindus as aggressors and Muslims as victims? But thanks to social media and a few courageous news channels who dared to break the self-imposed media blackout, the truth about these rampages by Muslim mobs is finally out.

In Dadri , illiberal media was involved in a competitive hunt for Hindu extremists, in Malda, they are yet find any for causing bloody riot.

For those who might be thinking – oh well, why ‘incite’ these mobs after all? Here is the thing – as we get more connected digitally, there will ALWAYS be something that will outrage some group or the other. Does it mean we take resort to brutal violence at the drop of a hat? Why not learn from Hindu society which is often subjected to abuse of their revered icons – including the routine message heard in some Muslim and Christian places of worship that ‘idol-worshipers’ (i.e. Hindus) are bound for hell? For eg., a media person had this to say about Bhagwan Ram some time back – 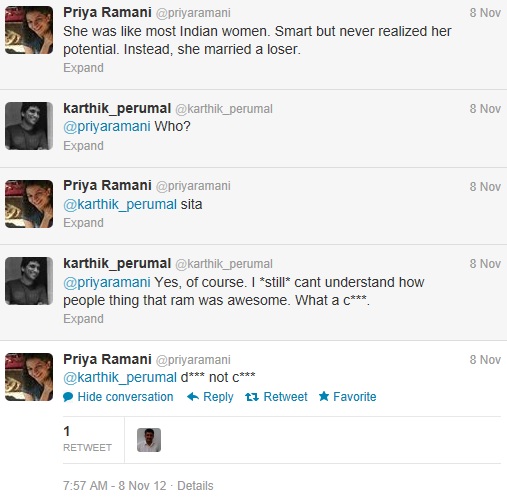 But all she got in response were a handful of angry tweets – there were no ‘protests’ on the street, nor any violent ransacking of public property. Akbarbuddin Owaisi’s disparaging remarks about Bhagwan Ram were similarly calmly ignored by Hindus and only legal action advocated.

“Liberty in thought and action is the only condition of life, growth and well-being: Where it does not exist, the man, the race, and the nation must go down.” – Swami Vivekananda

It is time for ALL thinking people, especially educated Muslims and Hindus, in this country to take a stand against such mob based violence before it gets totally out of hand. Bharat cannot be influenced by Sharia Law – the Citizens of Bharat, irrespective of religion, caste or creed, have chosen to stay together under the aegis of the Republic of Bharat governed by the Constitution of Bharat. We must force our political & law enforcement system to ACT when faced with such wanton violence. The freedom, liberty and fabric of our way of life is at stake. The pusillanimous approach demonstrated by the Government machinery in affected areas, and the ignorance by the media of this rabid bullying to subvert Constitutional Institutions has to stop if Bharat is to continue to be a liberal, multi faith, progressive nation.

Else, the end game is clear for those who care to see: an imposition of Sharia Law and its standards upon the Republic of Bharat or another unstable era of conflict with enormous costs. What could not be realized in centuries of foreign rule would happen if the citizens of Bharat and the Government of Bharat along with State Governments do not vigorously uphold the Constitution of Bharat and the Constitutional Institutions. Mr. Kamlesh Tiwari is a red herring. It is the Constitution of Bharat, the Institutions and the will of the leadership that is being tested by a group determined to impose its medieval, warped sectarian mindset based rules upon the people of Bharat.

“For to be free is not merely to cast off one’s chains, but to live in a way that respects and enhances the freedom of others.” ― Nelson Mandela

Muslims, Christians clash over construction of wall in Lahore