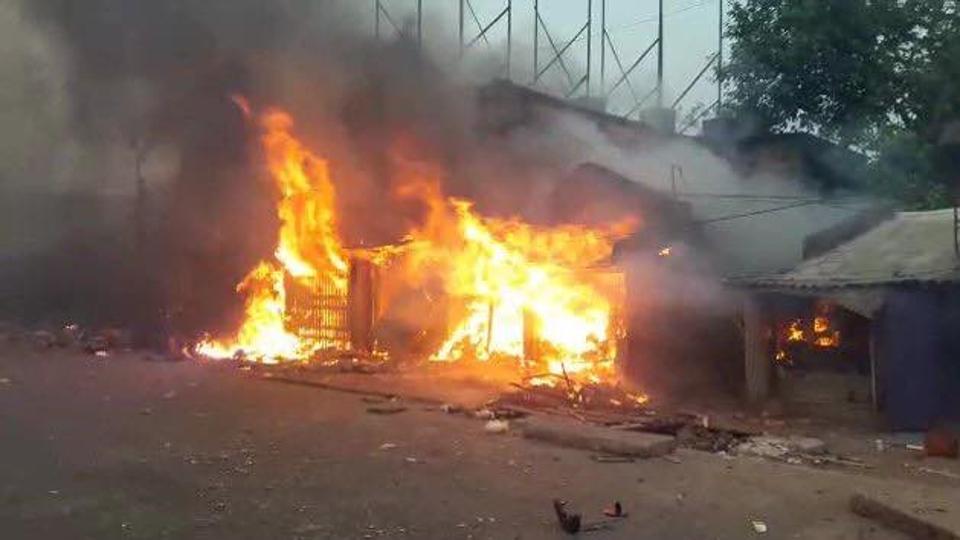 Alleged police inaction over a Facebook post denigrating Sri Ram and Sita Maa by 3 Muslim youth, has led to communal tension and incidents of violence in Bhadrak, Odisha since Ram Navami festival.

Bhadrak SP Dilip Das said a mob held up traffic on the road near Nua Bazar square and demanded police action against the youth who had posted offensive comments against the Hindu deities on Facebook. The group had a heated argument with the police. Some police vehicles were damaged by the mob. Though Section 144, prohibiting assembly of four or more people in public places, was imposed in the town, officials had to clamp curfew as the situation deteriorated further.

There are local media reports that the district administration has also imposed Section 144 of CrPC in Dhamnagar of the district after incidents like road blockade and arson reported from many parts of the coastal town. Sources said, irate locals burnt some shops in the town in protest of objectionable posts in social media on Thursday. They too took out rallies demanding immediate arrest of the wrongdoers.

As per Odisha Police, the situation is under control and no loss of life has been reported. Nearly 15 platoons of police force have been deployed in the town and patrolling is on at various places to keep any untoward incident at bay.

The violence started on Thursday after derogatory comments on Bhagwan Ram and Maa Sita were posted on a Facebook page. The Bhagat Sena Ram Navmi Samiti lodged a complaint with police in this regard with a demand of arresting Asif Khan, Asif Ali and M Jahan for their involvement in posting such remarks.

Though a peace meeting was convened on Friday, it failed to bring any resolution.

Despite vehement protests by local Hindus for two days, police failed to take timely action and arrest the 3 Muslims responsible for the offensive Facebook posts. This is in sharp contrast to the prompt police action witnessed in 3 cases where Hindus were accused of hurting Muslim sentiments –

MSM will spin the Bhadrak issue as another example of rising Hindu intolerance or communalization of a law & order issue, but it is pertinent to note that all protesting Hindu organizations in this case were only demanding police action against the offenders – no one was calling for mob justice like Islamists are wont to do. This assessment on the portal Rightlog.in nails the issue –

“The riot started because of a vulgar Facebook post on Lord Ram, Goddess Sita, and Lord Hanuman by a person called Asif Ali khan. The post contained many derogatory and defamatory remarks on Hindu Gods. This led to protest by the Hindus who encircled the Town police station demanding the arrest of the person involved but when a pseudo-secular party is in power the administration tries to brush under the carpet the entire incident and hence in this case too, no action was taken against the accused.

After continuous protests for more than 2 days, police reluctantly took the accused into custody (not arrested). In the meantime, riots erupted in the city as protesting people were attacked in places. As per the latest reports, the section-144 has been declared in the district but still, sporadic violence continues to erupt.

The state government has been highly negligent of the law and order situation which has led to the creation of such tragic situations. Riots are not new to Bhadrak and it has already faced many communal riots the deadliest one being the 1991 riots. The police always refrains from going into the area dominated by the minority community and this time too it did the same which led to much delay in taking the accused into custody.

Much damage had already taken place in the city with reports from locals about the desecration of Local Hanuman Temple and burning of several shops belonging to the majority community.

For days, the district administration did nothing except forming peace committees. Today after the situation seemed to slip out of hands, state government intervened by changing the collector and sending more police to the district, still, no concrete action has been taken place by the state administration.

The reaction of State government is not new and it has always played the role of the audience in case of riots and never intervened in time. This makes us recall the Kandhamal riots after which BJD snapped its ties with BJP blaming it, whereas, in reality, it allowed Swami Laxmananda Saraswati to die. After repeated threats and attacks by Christian missionaries and Maoists, almost no security (two unarmed guards) was provided to Swami Laxmananda Saraswati.”

Clearly, Bhadrak is yet another instance of the wages of Nehruvian secularism that we will sadly continue to reap for years to come.