Muslim Apostate Hacked to Death by Islamists in Coimbatore 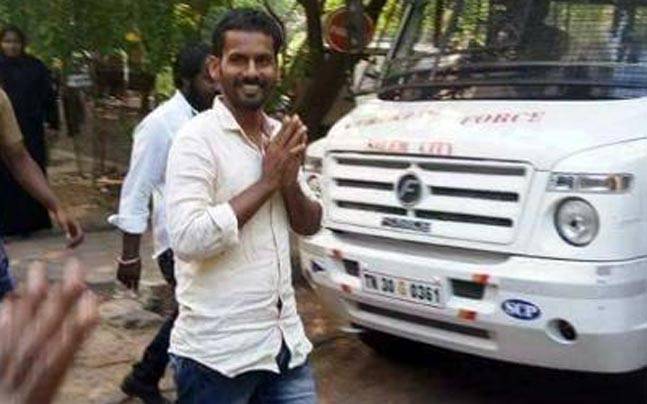 The Bangladesh Islamist virus has now reached Tamil Nadu. In a chilling rerun of the multiple hackings of atheist and secular bloggers in Bangladesh by Islamists, M Farook, a member of the Dravidar Viduthalai Kazhagam, a Tamil political group committed to spreading rationalist ideas, was hacked to death in Coimbatore on Thursday night. The cause is believed to be an anti-Islam message he had posted on Facebook.

Police said the victim, 31-year-old H Farook, received a phone call around 11 pm – following which he stepped out of his Bilal Estate house in South Ukkadam. He was on his scooter and was nearing Ukkadam Bypass Road when four people on motorcycles intercepted him and attacked him with sharp weapons. He tried to flee but couldn’t escape. They ran away when the man’s cries for help attracted the attention of local residents. Locals found Farooq’s body lying on the road. His body bore multiple stabs and cuts inflicted by the assailants.

Farook, an iron scrap dealer (some reports say he was daily wage laborer), regularly criticised religion on social media and his posts against Islam had infuriated many recently. His Facebook posts had attracted criticism by members of the Muslim community, who called him an apostate. In one of his recent posts, Farook posted a photo of one of his children holding a placard with the handwritten slogan “Kadavul illai, Kadavul illai, Kadavul illai (No God, No God, No God)”

The last call on his mobile was traced to a SIM that was obtained on fake Vellore address. Incidentally, Vellore is a hotbed of rising Islamic extremism in Tamil Nadu – in 2015, Ambur town in Vellore district had witnessed a large Islamist mob attack (instigated by MLA Askam Basha) on police, injuring 42 police personnel and leading to molestation of many woman constables.

Deputy commissioner of police (Coimbatore) S Saravanan said Farook’s anti-religious statements on Facebook and Whatsapp had offended many in the past. “That may have been the motive behind the murder,” he added.

Later, a realtor and Islamic activist, M Ansath (30), surrendered before the magistrate’s court and confessed to the crime. But as per Indian Express, police believe it was carried out by a gang of four, and orchestrated from inside the prison by a Bengaluru bomb blast accused. The paper adds that police are looking for the bomb blast accused’s brother-in-law Saddam Hussain, himself a murder accused, and a relative, Shamsuddin, for links to Farook’s murder. Police said the gang had been issuing threats to Farook for his atheist stand as well as targeting similar Muslim youths “who had deviated from the faith”.

Interestingly, last November, while Hindu Munnani men were taking out a funeral procession of their murdered spokesperson C Sasikumar, through the Muslim-dominated Ukkadam area where Farook lived, Farook had attacked a police vehicle and had been arrested under the Goonda Act.

Around a dozen Hindu activists and leaders from organizations like Hindu Munnani, VHP, BJP, RSS have been killed in Tamil Nadu over the last 5 years in jihadi attacks. There has been  a rise of  hardline Islamic socio-political outfits like Tamil Nadu Towheed Jamaat, Indian National League etc. which are supporting Kashmiri separatists and spreading radical Wahhabi ideas like prohibiting worship of tombs and use of religious symbols.

This 14-part series of articles on Vijayvaani explains how the jihad virus has grown in Tamil Nadu – with countless Islamist outfits like TMMK, MNK, Al-Umma etc mushrooming under the benign gaze of the ruling ‘secular’ Dravidian parties. Here is a summary of the rise of Islamism in Tamil Nadu politics, a gift of Nehruvian secularism and Western Indology inspired Dravidianism –

In 2009, MH Jawahirullah formed a political party, the Manithaneya Makkal Katchi (MNMK), which in alliance with the ruling AIADMK won two of the three assembly seats it contested in 2011. Jayalalithaa’s electoral alliance with MH Jawahirullah’s MNMK, which is the front office for TMMK and TNTJ, has been the single most potent cause for the rising aggression of jihadis in Tamil Nadu’s public life beginning 2011 when the AIADMK dislodged the DMK to form the government in the state.”

In 2012, the banned American movie ‘Innocence of Muslims’ led to an attack on the American embassy in Chennai; the arterial Mount Road was shut and vehicles and policemen targeted. Afternoon namaaz was offered on the main road. The embassy siege lasted four days. Chennai city has borne the brunt of other Islamic protests against movies such as Vishwaroopam, Thuppakki too.

Even the recent Jallikattu protests were infiltrated by Islamists and we had seen a deadly attack on Ice House police station in the heart of Chennai, in a Muslim neighborhood.

Apostasy in Islam (riddah or irtidād) is commonly defined as the conscious abandonment of Islam by a Muslim in word or through deed. It includes the act of converting to another religion by a person who was born in a Muslim family or who had previously accepted Islam. Someone who is suspected to be an apostate, or murtadd is often excommunicated from Muslim society.

Many Islamic countries have laws against apostasy, some prescribing execution. Sharia courts in some countries use civil code to void the Muslim apostate’s marriage and deny child custody and inheritance rights. Pakistan has a blasphemy law that carries death penalty using which apostates can be targeted.

A recent survey of Muslim nations conducted by Pew Research Center found a high degree of support among ordinary Muslims for executing apostates in South Asia – Afghanistan (78%), Pakistan (64%), Bangladesh (36%). The survey did not include Bharat.

The Muslim holy book, the Quran, discusses apostasy in many of its verses, the most prominent being Quran 4:89 –

Sahih Hadiths (accounts from the life of the Islamic prophet), the most trusted books in Sunni Islam after Quran, describe the following punishments for apostasy –

Sahih al-Bukhari 52:260: Ali burnt some people and this news reached Ibn ‘Abbas, who said, “Had I been in his place I would not have burnt them, as the Prophet said, ‘Don’t punish (anybody) with Allah’s Punishment.’ No doubt, I would have killed them, for the Prophet said, ‘If somebody (a Muslim) discards his religion, kill him.’

The intelligence agencies and central Government need to take close note of developments in Tamil Nadu and contain the rapid growth of Saudi-funded Salafi/Wahhabi mosques and groups, which are fueling Islamic fundamentalism.

Mainstream media bias has again come to the fore in their muted coverage of this incident, with most newspaper headlines giving no hint whatsoever that the murder suspects are Islamists or that the victim is a Muslim atheist. This is in contrast to the extensive coverage of the Kalburgi and Dhabolkar murders, where headlines openly hinted at involvement of ‘Hindu radicals’ even though no conclusive evidence, much less a confession, has emerged yet.

The fight against Islamism is the real fight that avowed Muslim liberals & moderates like Javed Akhtar and Shabana Azmi need to fight, rather than rail against Hindu ‘majoritarianism’. Farooq only rejected God, he did not mock or abuse any specific Islamic traditions like some controversial ‘rationalists’ are wont to do when they exclusively denigrate Hindu beliefs in well-funded and organized campaigns – yet, he was brutally hacked to death. Why aren’t more educated Muslims speaking up on this worrying trend?

At the moment, the below cartoon certainly rings true –