Another Academic Hacked To Death By Islamists in Bangladesh 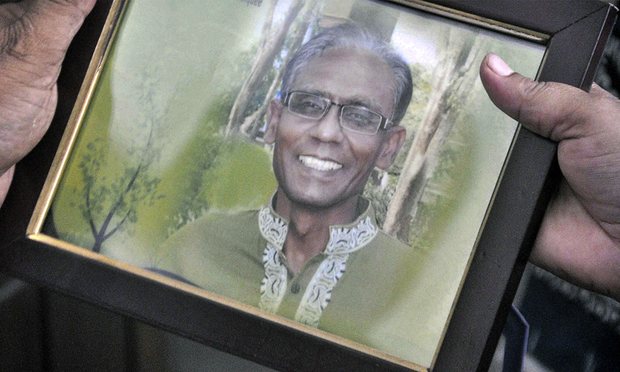 A university professor on his way to work in northwestern Bangladesh, a 91% Muslim majority nation, was hacked to death today in an attack similar to other murders by radical Muslim fundamentalists of secular/atheist activists, Hindus and other minorities.

As per this report in the Bangladesh news outlet bdnews24.com –

“A university teacher in the northern Bangladesh district of Rajshahi has been murdered within 50 yards of his residence. Rezaul Karim Siddiquee, who taught English at the Rajshahi University, was hacked by sharp weapons.

Two men on a motorcycle attacked him around 7:30am on Saturday at the city’s Boalia area, police said quoting witnesses. “He was on his way to catch a bus for the university campus,” said local police OC Shahdat Hossain. “Motorcycle-borne assailants slashed his neck and killed him on the spot,” said the police officer.

Siddiquee, an English Department teacher, used to write and was involved with several cultural organisations. The motive behind the murder is yet to be known.

The victim’s family said that Siddique edited an art and literature magazine and was an adviser to a local cultural organisation. His brother Sazidul Karim told bdnews24.com that they were not aware whether the Rajshahi University professor had been threatened by anyone recently.

Police said that they were looking for leads by working on all possible angles .

“We are checking whether any militant outfit is involved in the killing,” said Detective Branch Assistant Commissioner Sushanta Chandra Roy.

Since 2013, a number of secularist writers, bloggers and publishers, and minorities in Bangladesh have been killed or seriously injured in attacks perpetrated by Islamist extremists. The attacks have taken place at a time of growing tension between Bangladeshi secularists, who want the country to maintain its secularist tradition of separation of religion and state, and Islamists, who want an Islamic state.

Tensions have risen as a result of the country’s war crimes tribunal, which in 2013 convicted several members of the opposition Islamist Jamaat-e-Islami party for the brutal genocide during Bangladesh’s bloody war of independence in 1971 – JeI had collaborated with the Pakistan Army in murdering upto 3 million civilians and raped between 200,000 and 400,000 women; with Hindus bearing the brunt of this violence.

Secularists have been calling for harsher penalties for the convicted, with some calling for the Jamaat-e-Islam party itself to be outlawed, drawing the ire of the party’s supporters. Responsibility for the attacks on secularists which have since occurred have been claimed by a number of terrorist groups including Ansarullah Bangla Team, who have frequently justified their attacks on the grounds that their victims are “atheists” and enemies of Islam. Four bloggers had been killed in 2015, but only 4 people were arrested in the murder cases.

This latest murder of the Rajshahi University professor has expectedly sent shockwaves through the international community, with Western media too reporting on it. But even while highlighting the worsening situation in Bangladesh which affects all citizens living there, Western media organizations like Associated Press (AP) and New York Times (NYT) couldn’t hide their Hinduphobia. Below is a screenshot of an AP report which NYT carried that talks about the targeting of various groups by Islamists, i.e everyone except Hindus of Bangladesh. It seems the most brutal recent murder in Bangladesh – the beheading of Hindu priest Jogeswar Roy – is not important for these media houses or is conveniently forgotten.

Jamaat-e-Islami (JeI): Fountainhead of terror and its roots in Bharat

Jamaat-e-Islami (JeI) Bangladesh is an offshoot of the Jamaat organization that was founded in undivided Bharat in 1941 by Hyderabad born Maulana Abul Ala Mauddudi who in his book Jihad in the Way of Allah said “if the Muslim Party commands enough resources, it will eliminate un-Islamic governments and establish the power of Islamic government in their place”.

Jamaat drew its inspiration from the Deobandi school of Islam, known for promoting religious extremism in several countries in the region, and modeled itself after the Muslim Brotherhood. Separate branches were subsequently established in both Pakistan and Bangladesh (then East Pakistan), also known as Jamaat-e-Islami, following Bharat’s partition. The offshoot in Bharat is known as Jamaat-e-Islami Hind (JIH). JeI Bangladesh and its student wing, Islami Chhatra Shibir (ICS), continue to primarily draw their members from Deobandi seminaries in the country.

In 2013, when the Bangladesh war crimes tribunal death penalty for senior JeI-Bangladesh leaders had triggered violence across Bangladesh, a massive rally was organized by JeI-Hind in Kolkata on 30 March 2013, explicitly against Bharat’s liberation of Bangladesh and in support of Pakistan and the war criminals already convicted. Over a dozen Muslim groups, including the All Bengal Minority Council, the All Bengal Minority Youth Federation, the Madrassa Students Union, the Muslim Think Tank the All Bengal Imam Muazzin Association, and even Welfare Party of India (same party whose president Syed Qasim Rasool Ilyas’ son Umar Khalid was in news recently for the JNU anti-national protests) were involved in the rally.

Incidentally, it was from the same Kolkata Maidan (ground) in August 1946 that the call for ‘direct action’ was given by the Muslim League. This is what a media report says about the rally organized by JeI-Hind:

Sayeedi’s Razakar militia, witnesses told Bangladesh’s ongoing 1971 war-crimes tribunal, kidnapped Gourango Saha’s sisters, Mohomaya, Anno and Komol, and handed them over to Pakistan army troops who raped them over three days.  They burned down the Hindu-owned homes in the village of  Umedpur, looting homes—and shooting dead at least one local resident, Bisabali, after torturing him. They carried out the large-scale ethnic cleansing of Hindus from areas along the India-Bangladesh border.”

One of the most violent terrorist groups that has been spawned by JeI-Bangladesh is Jamaat-ul Mujahideen Bangladesh (JMB). JMB has struck deep roots in West Bengal, as became clear after the Burdwan blasts in 2014. Ahmed Hassan Imran, TMC MP of the Rajya Sabha who was closely associated with the Sharada group is alleged to have channeled Sharada funds to the JEI. Imran was a cofounder of SIMI, but he claims he left the organization in 1984. Imran reportedly migrated to Bharat illegally sometime between 1970 and 1971 when Bengalis in East Pakistan were fighting for independence from Pakistan.

The spate of brutal murders in Bangladesh show that even with a democratic system and a relatively secular party (Awami League) currently in power, Islamism is always bubbling beneath the surface in a Muslim majority nation. More so in the Bharatiya sub-continent, which oblivious to most Hindus, has spawned some of the most radical and hardline Sunni Islamic movements like Deoband, Jamaat-e-Islami, Tablighi Jamaat etc in the last 150 odd years. What is happening in Bangladesh today is already happening in Bharat – as the spate of brutal murders of Hindu activists like K Raju, Prashant Poojari, Auditor V Ramesh etc show. But many urban Hindus brought up on the secular kool-aid fed by our media dismiss those deaths as ‘political murders’ (the implication being that they deserve such deaths for associating with ‘communal’ causes and ‘extremist’ organizations like RSS/BJP) – are they waiting for one of their own to be hacked before we wake up to the danger staring us in the face? Nevertheless, it is important that our intelligence agencies keep a close watch on jihadis in Bangladesh and their backers in Bharat.