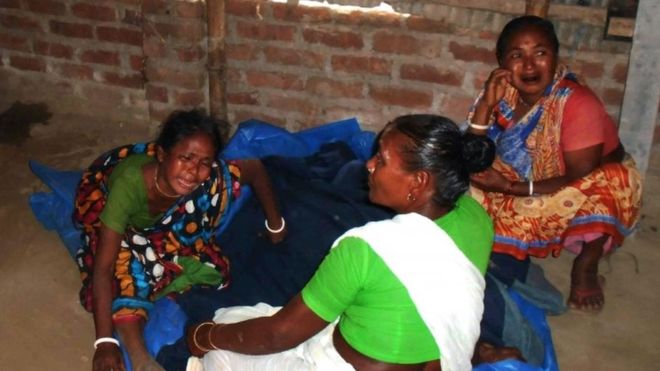 A Hindu priest was beheaded by Islamist terrorists in northern Bangladesh and two worshippers wounded, in the latest assault targeting Hindus in the Muslim-majority nation. Two assailants armed with pistols and cleavers attacked Jogeswar Roy, 45, the head priest of Sri Sri Sant Gourio Math, at his home in the temple on Sunday morning, officials said.

“The priest was preparing for morning prayers when they pounced on him and slit his head from the body at the verandah of his home inside the temple,” said Shafiqul Islam, a government administrator in the sub-district Debiganj where the temple is located.

“We recovered a blood-stained cleaver from the spot,” he said. Two devotees were wounded in the attack including one who was shot as he tried to save the priest, he added.

Police suspect that Islamist terror group, Jamaat-ul Mujahideen Bangladesh (JMB), could be behind the attack. However, IS (Islamic State) claimed responsibility in a statement issued via social media.

“In a security operation facilitated by the almighty God, soldiers of the Caliphate liquidated the priest Jogeshwar Roy, the founder and the head of the Deviganj temple that belongs to the infidel Hindus,” the Isis statement read in Arabic. “One of his companions was hurt after being targeted with light weapons in the area of Panchagar in Northern Bangladesh, and the Mujahideen returned to their positions unharmed, and all praise be to God.”

8 Dec, 2015: Ten people were injured at a Hindu religious gathering in northern Bangladesh as three crude bombs went off at Jatra pandal on the premises of Kantaji Temple in Kaharol upazila of Dinajpur.

Extremists have carried out a series of high-profile attacks on secular writers, hacking to death five bloggers in 2015, including 3 Hindus: Avijit Roy, Ananta Bijoy Das and Niloy Neel

“Jamaat-e-Islami (JeI) Bangladesh is an offshoot of the Jamaat organization that was founded in undivided Bharat in 1941 by Maulana Abul Ala Mauddudi. Jamaat drew its inspiration from the Deobandi school of Islam, known for promoting religious extremism in several countries in the region, and modeled itself after the Muslim Brotherhood. Separate branches were subsequently established in both Pakistan and Bangladesh (then East Pakistan), also known as Jamaat-e-Islami, following Bharat’s partition. JeI Bangladesh and its student wing, Islami Chhatra Shibir (ICS), continue to primarily draw their members from Deobandi seminaries in the country.

JeI and ICS have a long history of radicalism and violence, and both strive to create a Taliban style regime in Bangladesh. JeI is the most powerful Islamist group in the country and has been the ideological center and recruiting base for several terrorist groups, including Harkat-ul-Jihad-al-Islami Bangladesh (HuJI-B), a US State Department designated Foreign Terrorist Organization (FTO), and Jamaat-ul Mujahideen Bangladesh (JMB). HuJI-B’s parent organization Harkat-ul-Jihad-al-Islami has also been banned by the United Nations, the United Kingdom, and Bharat, while the British and Bangladeshi governments have further outlawed HuJI-B and JMB.”

JMB has struck deep roots in West Bengal, as became clear after the Burdwan blasts in 2014. Ahmed Hassan Imran, TMC MP of the Rajya Sabha who was closely associated with the Sharada group is alleged to have channeled Sharada funds to the JEI. Imran was a cofounder of SIMI, but he claims he left the organization in 1984. Imran reportedly migrated to India illegally sometime between 1970 and 1971 when Bengalees in East Pakistan were fighting for independence from Pakistan.

Religious cleansing of Hindus in Bangladesh

At the time of Bharat’s partition in 1947, Hindus comprised just under one in three East Pakistanis. When East Pakistan became Bangladesh in 1971, they were under one in five; thirty years later less than one in ten; and according to some estimates, less than 8% today (R Benkins A Quiet Case of Ethnic Cleansing – The Murder of Bangladesh’s Hindus).

These two articles (1, 2) provide a deep insight into the systematic persecution of Hindus in Bangladesh which prevails to this day, despite the efforts of the Sheikh Hasina Government.

(This article has been curated from the following news sources – 1, 2, 3)