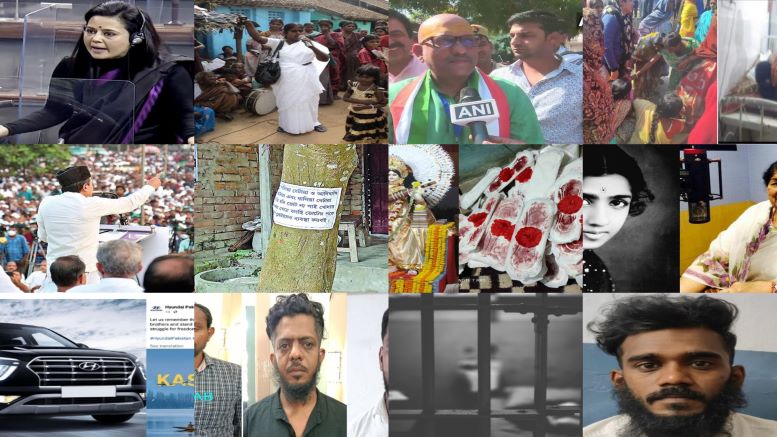 In this weekly summary for the period from 6 February to 12 February 2022, we hope to provide a snapshot of such crimes and hopefully awaken more people around the world to this human rights crisis:

1) “Keep the sacks of salt ready. On 7 March, we will bury Modi and Yogi in the ground along with those..that is the best use of the salt (which the government claims to be giving),” were the words of the Congress candidate from Varanasi during a campaign rally for the upcoming UP state elections.

2) The nation mourned the passing away of legendary singer Lata Mangeshkar but such is the state of our nation today after 70 years of debilitating left-liberal-secularism that even this beautiful soul’s passing away was met with ugly, hate-filled bigotry by the usual Hindu-hating elements: Islamists, radical feminists, woke leftists, neo-Ambedkarites, etc.

3) Hyundai India found itself in the eye of the storm as it chose to block users after they supported their Pakistani dealership’s call for disintegration of Jammu and Kashmir union territory from Bharat.

4) A local communist named Prabhath from a Hindu communist family in Kannur recently married Sahala, a Muslim girl, under the Special Marriage Act (SMA) that doesn’t require either spouse to convert if they belong to different religions. The same Muslim political parties and religious bodies which deny the existence of grooming jihad, are up in arms this time around and accused that “Islam is under threat from atheists and irreligious groups”.

5) A 32-year-old man was arrested by Malappuram police for molestation and attempted rape of a minor girl. Moosa Purakkal Noufal (32), a resident of Ponnani in Malappuram, was apprehended and charged with sections of the POCSO ( Protection of Children from Sexual Offences) Act.

6) Saraswati Puja was celebrated with great grandeur in West Bengal on February 5; the Panchami of the goddess of wisdom was observed in Bihar, Odisha, and other parts of the country as well. But a disturbing trend that has surfaced in Bengal since communist days is the treatment of the Hindu festival of Saraswati puja as “Valentine’s Day”.

7) Madurai Bench of Madras High Court has preached tolerance to a Hindu man who petitioned for relief from noise pollution caused by a church in his neighborhood. The judge said that tolerance is one of the basic tenets of Hindu dharma and the man should tolerate having a church nearby as the neighborhood has a temple as well.

8) Last Saturday around 3.30 pm, these girls – most of them wearing burqa (full body cloak), niqab (face veil), and hijab (a scarf covering hair) – were shouting slogans against the authorities during a sit-in in front of the Kundapura Junior College in Kasaba village. Police sub-inspector Sadashiva R Gavaroji who was observing the law and order situation near the college detected an unlawful assembly of criminals who were armed with weapons. A gang of six, carrying knives and weapons, threatened some Hindu students.

9) Anti-Hindu bigotry has become the trademark of ‘secular’ politicians like Mahua Moitra of Mamata Banerjee’s Trinamool Congress (TMC). She recently used the gaumutra jibe, a derogatory reference to Hindus, in her tweet ahead of her speech in the Lok Sabha.

10) Rupesh Kumar Pandey (17), an only child, was on the way to attend the Saraswati Puja visarjan (murti immersion) procession when a gang of 4 Muslim youth assaulted Rupesh, for reasons as yet unknown, at Kariyadpur village under Barhi police station in Hazaribag district. A seriously wounded Rupesh was rushed to hospital where he was declared dead.

11) The ‘hijab’ row instigated by PFI’s student wing CFI has now taken the usual turn of all Islamist protests. Stone-pelting by Islamists and police lathi-charge has been reported from various parts of Karnataka. A teacher, Manjunath Naik, was attacked with iron rods causing severe head injuries in Banahatti town of Bagalkot district.

12) In a shocking incident from Mumbai, the Bhayandar police on Wednesday, February 2, arrested Adil Munawar Khan, a 21-year-old Muslim man for killing his live-in partner Puja’s two-year-old daughter. It has been alleged that Khan got infuriated after the toddler started to cry for milk.

13) Congress’ covert support to the ‘tukde-tukde’ gang is out in the open as evident from Rahul Gandhi’s address in the Loksabha. His speech, where he said Bharat is a ‘union of states’, is ample proof of the partisan politics of Congress which is continuing the divide and rule policy of the British.

14) Ghulam Sheikh (30) brutally murdered a Hindu lady in Pune, Maharashtra, and is now absconding. Earlier, Sunita Suryawanshi (39) and her husband Raghunath rented out a portion of their home near the Pune international airport at Lohegaon to Sheikh, a migrant from Bihar. It is not known if Sheikh had shared his true identity with them while becoming a tenant.

15) An audio clip accredited to National award-winning Bengali singer and TMC politician Kabir Suman speaking to a journalist from R Bangla is making the round of social media. Though HinduPost has not independently authenticated the audio clip, as per an article published in Bengali news site Aajkal, the singer admits that he will repeat this behavior again. The unspeakable expletives hurled at the journalist by the artist have taken the people of Bengal by shock.

16) The Chennai Corporation has asked artists to not “highlight” Hindu deities in an effort to re-create Chola era paintings as a part of beautification work. Artists allege “pressure” from certain groups which had complained to the corporation. As the Chola era paintings we have now are mainly from temples, artists wonder how they can be re-created without “highlighting” Hindu deities.

17) In a ‘protest’ organized by Sharad Pawar’s NCP (Nationalist Congress Party) in Pune in support of ‘Hijab’, a Muslim woman was heard saying “Modi ko angar laga ke sulga do” (set Modi on fire). The lack of knowledge that these women possess was evident from the fact that she goes on to say that PM Modi brought in the rule banning Hijab in Karnataka.

18) Yet another case of a Hindu man having to pay with his life for loving a Muslim girl emerged from Uttar Pradesh. Last Wednesday, Monu, son of Jagat Singh and resident of Masoompur village, Dilari police station area, Moradabad district was strangled to death with a muffler by his Muslim girlfriend’s brothers.

19) Abusing Hindu deities and Dharma has become a regular feature of political discourse in ‘secular’ Bharat. The recent Hijab row has become yet another opportunity for Hindudveshis to launch an attack on Hindu Dharma. Recently in a ‘protest’ supporting Hijab organized by SDPI/PFI two apparently Neo-Ambedkarite leaders were seen abusing Maa Saraswati and Brahmadev. The incident took place at Mulabagal in Kolar District.

1) A sessions court in Pakistan’s Ghotki has sentenced a Hindu man to life in prison on charges of blasphemy. Nautan Lal has been fined Rs 50,000 as well.

1) A Muslim candidate in Bangladesh municipal elections issued a fatwa saying “Haram to vote for a Hindu candidate” while there have been reports of Hindu voters being threatened elsewhere.

3) A persecuted Hindu family of Anima Rani Das and Bimal Das from North Sreerampur, Dhomki, Patuakhai district. They were given threats of murder, rape, and being kicked out of the country by Mohammad Sajal Mridha and his men on 09/02/22.

4) Hindu children, who are now homeless, foodless, and also faced with uncertainty & insecurity in their lives, are on the streets begging for food. On 28/01/2022 their homes were burnt by Mohammad Shamim & his men at Jalepara, Sonaichari Shitakundha, Chittagong.

1) Priests and devotees at temples in the Greater Toronto Area (GTA) of Canada are in a state of fear as half-a-dozen temples have been vandalized and burgled over the past ten days, with cash stolen from donation boxes and even ornaments adorning murtis stolen.