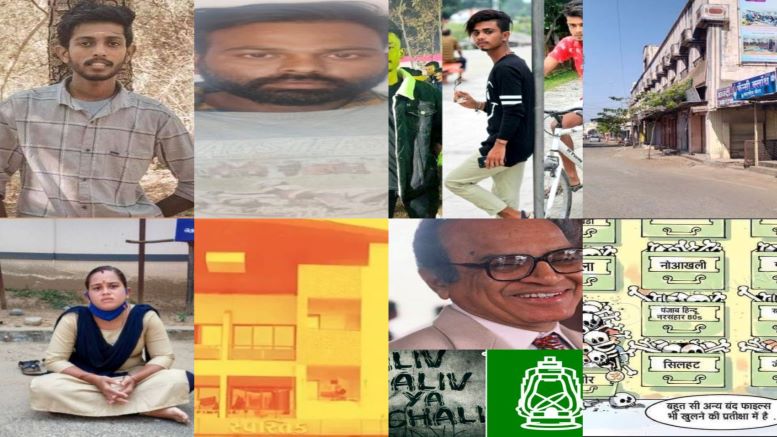 In this weekly summary for the period from 13 March to 19 March 2022, we hope to provide a snapshot of such crimes and hopefully awaken more people around the world to this human rights crisis:

1) CPM-DYFI activists have murdered yet another RSS-Yuva Morcha (BJYM) leader in Kerala. Tharoor panchayat Bharatiya Janata Yuva Morcha secretary Arun Kumar who was stabbed on Sivarathri by CPM workers succumbed to his injuries on Friday. Of the seven accused, six have been arrested so far and all the accused are Communist Party of India (Marxist) (CPM) workers.

2) Mohammad Wali Khan, a father of four kids, was arrested after he engaged in grooming jihad of a minor, sexually assaulted her several times, and threatened the young victim. This case was reported from Bhind district, Madhya Pradesh and the accused has been charged under the Madhya Pradesh Religious Freedom Act 2021, Protection of Children from Sexual Offences Act (POCSO), and for rape.

3) A young divyang woman, identified as 26-year-old Vimala Devi, in Tamil Nadu has accused her husband of refusing to live with her after she scuttled her in-laws’ attempts to convert her. The Hindu woman along with her mother staged a protest in Nagappatinam Collector’s Office as police didn’t take any action despite filing complaints many times.

4) Guwahati police are on the lookout for five Muslim men who gang-raped a minor girl, recorded the sexual assault on their mobile phones, uploaded the same on social media, and are now absconding. Police notified that Biki Ali, Faizur Ali, Puna Ali, Pinku Ali, and Raja Ali – all in their early twenties – are on the run from the authorities.

5) A 19-year-old youth identified as Mohammad Sohail has been caught harassing and molesting young girls using the burqa as a shield to hide. He is a Pathanpura mohalla of Najibabad and was found loitering in a burqa around an educational institute in Bijnore.

6) A Christian school in Gujarat has punished students for greeting each other by saying Jai Shri Ram. The school made the boys write apology letters for misbehavior. After Hindu organizations staged a protest by chanting Jai Shri Ram in front of the school, the principal has tendered an apology.

8) A Christian cleric from Kerala has been arrested for sexually assaulting a minor Hindu girl. The incident occurred at Koodal in Pathanamthitta and the accused has been identified as Ponson John (35) of Kripalayam House.

9) 20-year-old Rameshwar Ankush Kharat was reportedly lynched to death by a mob of Islamists following a dispute over swimming in the local well in Maharashtra’s Jalna District’s Ambad village. The incident took place on the evening of March 12 at around 4.30 when the mob gathered to beat the youth with iron rods and wooden sticks. He was admitted to a private hospital in Jalna where he breathed his last the next day around 6 in the evening.

1) A minor Hindu girl, Bindiya Meghwar has been abducted for forced conversion and ‘marriage’ in Khairpur, Sindh province.

2) A 12-year-old Hindu girl, Naina Kolhi has been raped and brutally murdered in the Tando Yousuf Police Station area of Sindh.

1) ISKCON Radhakanta temple in Dhaka was attacked by a large Muslim mob who beat up Hindu devotees. Three Hindus have reportedly suffered injuries. Incidentally, the Hindu festival of Holi and the Islamic festival of Shab-e-Barat fall on the same day this year.

2) A minor Hindu girl was murdered and her dead body was thrown down from the seventh floor at Mymensingh’s Shawdeshi Bazar on March 13.

3) A Hindu temple was set on fire and completely destroyed at Banigram, Sadanpur, Bashkhali P.S Chittagong on March 14.

4) A temple was pillaged by unidentified miscreants on March 14 at Ghiur, Manikganj, Dhaka.