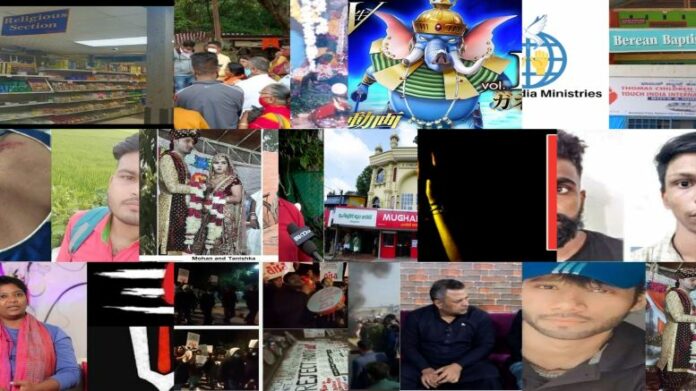 In this weekly summary for the period from 5 December to 11 December 2021, we hope to provide a snapshot of such crimes and hopefully awaken more people around the world to this human rights crisis:

1) Fazaddin Hossain, also identified as Mohammad Fayez Ahmed in some reports, a second-year student of Falakata College in Alipurduar, has been arrested by West Bengal police for severely attacking his batchmate and leaving her blood-smeared after she refused to accept his romantic proposal.

2) A Dravidianist psychiatrist from Tamil Nadu has made extremely vulgar remarks about Urdhva Pundra (tilak worn by Vaishnavites) and Bhagwan Shiva’s third eye claiming the latter to be symbols of patriarchy. While talking about the issue of a caste organisation’s logo being displayed in Jai Bhim movie, she has unnecessarily dragged Hindu Dharma, it’s scriptures and itihasas and denigrated them in defence of the movie.

3) 20-year-old newlywed bride Tanishka Sharma was shot five times by Mohammad Shahil and his friends while she was on her way to her in-law’s place after the wedding ceremony. She is in critical condition at the Rohtak PGIMS hospital.

4) Islamic fundamentalists have struck again in Kerala, this time in Thodupuzha of Idukki district. Popular Front of India (PFI) goons attacked Manusudhan, an ST (Scheduled Tribe) Hindu government employee, in front of his children in broad daylight and he escaped death by a whisker. Other than Janam TV, the rest of Kerala’s mainstream media shunned reporting the incident that happened over alleged blasphemy.

5) A Myanmar national working for a missionary FCRA NGO has been arrested and ordered to be deported after being caught in a airport in Manipur without a passport. She confessed to having lived in Bharat for 11 years without valid documents and working as a missionary. She has been using the identity card issued by a Bible College in Bengaluru to live in the country illegally.

6) Hindu organisations staged a protest against Railway officials as the latter had decided to demolish a temple in the Railway cantonment area in Bengaluru. Even though the temple has been legally functioning for more than 50 years, Railway officials have suddenly decided to raze it down. However local Hindus along with Hindu Janajagruti Samiti stood up against the demolition drive and saved the temple. While Muslims freely encroach on public places for namaz, Hindus have to protest to protect even what’s rightfully theirs.

8) A deaf and mute woman was repeatedly raped in the national capital’s northeast area, an official said here on Tuesday, adding that the culprit who committed the heinous crime has been arrested. The victim (30) was repeatedly raped by a 34-year-old man, identified as Rehan Rofiq a resident of Maujpur, Delhi, since November 21.

9) Police arrested Kandamangalath Muhammad Ali (25) and Aramkuzhi Veetil Al Ameen (aka Irshad, 19) from Munduparambu, Malappuram after they threatened an underage teenage girl they had groomed on social media. The duo would meet girls online and pretend to be in love. Those chats soon turned into regular video calls.

10) A protest march was carried out by the Jawaharlal Nehru University Students’ Union (JNUSU) inside the campus demanding reconstruction of the demolished Babri Masjid in Ayodhya.

11) Gadipura area in Nanded witnessed violence by an Islamist mob where two persons are reported to have been grievously injured and 13 people have been arrested. Several houses have been damaged and the power supply transformer was also blown up.

12) A Muslim man named Hassan Pathan had been arrested for killing his live-in partner Neha Gupta. The DN Nagar Police Station took him on Monday while adding that Gupta was murdered after an argument between the two.

13) Popular Bollywood comedian Johnny Lever has turned into a Christian preacher and is called ‘Brother’ Johnny Lever now. He has been involved in full-time preaching, attends ‘healing’ meetings, and performs “miracles”, just like “Mera Yeshu Yeshu” fame Pastor Baljinder Singh, for over a decade now.

14) 22-year-old Hindu youth Shyam Rathod was brutally murdered by five people in Maharashtra’s Yavatmal over a petty dispute. The incident took place in broad daylight in the Yavatmal’s Kali Daulatkhan.

15) 25-year-old Saif Ali Shaikh has been arrested for murdering a neighbour almost twice his age. It is said that Surendra Gaud (47) was murdered by the accused in a fit of rage after the latter allegedly refused to reduce the volume at which he was listening to songs on his tape recorder.

16) A woman from Haryana’s Yamunanagar has alleged that her Muslim husband forced her to have physical relations with his brother and other male relatives apart from himself. The victim is also said to have been subjected to gang rape and unnatural sex. The police have registered a case against the accused and nine others for rape, forcing one to have unnatural sex, holding one hostage, physical assault, and several other sections.

17) Tamil YouTuber Maridhas has been arrested by TN police allegedly for his tweet questioning DMK government’s inaction against anti-Bharat elements.

1) Hindu brother murdered while trying to save his sister from being raped. Bheru Kohli was brutally murdered when he resisted men who were harassing his sister.

2) A Pakistani journalist revealed how schools in the Islamic nation were propagating Hindu hatred. He was speaking in a TV show titled ‘Tellings with Imran Shafqat’ where he was one of the panelists. The revelation came in the wake of a Sri Lankan factory manager being lynched brutally for ‘blasphemy’.

1) A jamaat in Trinidad and Tobago has demanded a supermarket to remove murtis of Hindu deities displayed in their store. However the supermarket run by a Muslim, the vice-president of the jamaat has refused to do so and demanded an apology from the person who wrote the letter.