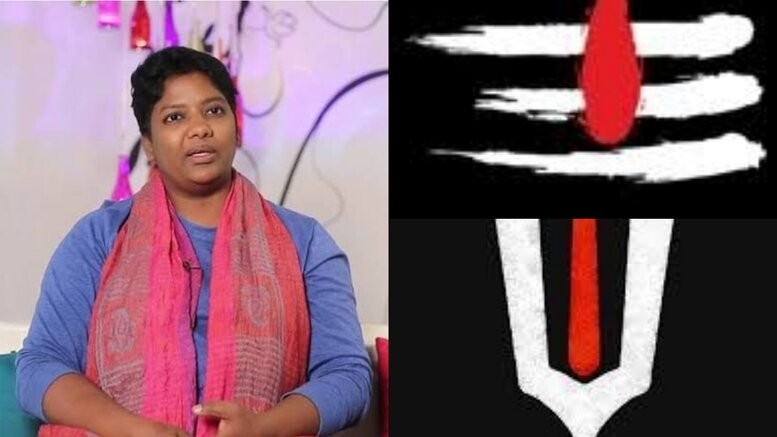 A Dravidianist psychiatrist from Tamil Nadu has made extremely vulgar remarks about Urdhva Pundra (tilak worn by Vaishnavites) and Bhagwan Shiva’s third eye claiming the latter to be symbols of patriarchy. While talking about the issue of a caste organisation’s logo being displayed in Jai Bhim movie, she has unnecessarily dragged Hindu Dharma, it’s scriptures and itihasas and denigrated them in defence of the movie.

Dr. Shalini, a psychiatrist by profession, is a Dravidianist and reportedly a sympathiser of Viduthalai Chiruthaigal Katchi (VCK). VCK chief Thirumavalavan is a rabid anti-Hindu and despite claiming to be the champion of “Dalits” his politics is seems as mainly anti-Vanniyar. The Surya starrer Jai Bhim received much flak for contorting truth and misrepresenting facts. It showed a Christian police officer, the villain in real life, as a Hindu Vanniyar character in the movie.

The director had displayed a calendar with the logo of Vanniyar association to imply that the villain was a Vanniyar and falsely implicated Irula tribals to help his caste people escape. After widespread protests and legal measures to get it removed, the logo was replaced with Lakshmi Devi’s image. A so-called doctor, Shalini has been sharing her thoughts about the issue and has given an interview to Asianet Tamil.

In the interview published by Asianet, she has used language that cannot be used in a civil discourse to defend her anti-Vanniyar stance. The translation of her interview as follows, “There is a belief in our society that some men birthed babies. It is mentioned in some puranas. But our problem is that many do not know the difference between puranas and history. There is a mentality to think and speak that something said in the puranas happened for real and is the history. But puranas are fictional tales.”

“Only something which has proof is history. Those with no proof are puranas, Shiva Purana, Skanda Purana, etc are like that only. They say Muruga(Skanda) was born from the flames from Shiva’s third eye when they were dropped by Agni deva in water. Similarly when it comes to Shiva, when he was aroused his third eye opened(referring to the incident with Manmada). It is the pen*s they are referring to. Pen*s also has an eye like opening. So that third eye isn’t on the forehead.”

“Just because someone said that there is an eye in his forehead it is illustrated like an eye. But what we should understand is that a baby cannot be born from a man’s sperm alone. It needs a uterus and an egg. So all these puranas are against uterus, pregnancy and birth (through a woman’s genital). It’s not only Indian mythologies. Greek mythology also has a similar story of Zeus creating a son, Dionysus, from his thigh”. Even Britannica says Zeus had saved his son, Dionysus, when his mother died, by keeping the fetus inside his thigh till the latter attained maturity. Dionysus is called a twice born

“There are many myths like this. Some rituals are performed to intentionally hide, deny that babies are birthed by women. Likewise Brahmins and Jains have the habit of wearing janeu. They say that it is impure to be born out of a woman (womb/genital) and to rectify that they are wearing janeu. They won’t celebrate the coming of a baby. They’ll say that it’s impure and only after remedying it they’ll bring it to the temple. If the birth of a child is called impure in this culture you should see how ‘birth’ is seen here.”

“Claiming that we came from Surya, Shiva’s third eye, etc are attempts to reject the fact that a child is born out of a woman’s body. It is based on this thought that there is a tale that Karna was born to Surya Bhagwan. The reason behind this is that when there is a war/competition between 2 sections, to have that imperial mentality that one is greater than the other, that the other section should know that both are not same and to instill the thought that one is not born out of a woman’s womb but from Surya unlin the other. They are taught to think like this”.

Vanniyars claim themselves to be the descendants of Surya Kula Kshatriyas. Shalini further says, “They are taught like this to make them think that they weren’t born ordinarily from the genitals of women like others. They are taught ‘you were directly born out of Surya, yagya kinda, agni kunda, etc’, to make them think that to hide the fact that they are mortals and to feel that they were born from spiritual and godly beings.”

“But in our culture we say that all beings are equal and all of them are born through their mothers’ genitals only. Which is why some religions, to be specific the Namam(Urdhva Pundra) worn by Iyengars denotes the genitalia of a woman. Even Perumal(Maha Vishnu) wears that (symbol) on his forehead. So worshipping women was our indigenous culture. It was known that if not for women there will be no creation. But the patriarchal mentality of men made them think “Can only women give birth? We can also birth children. We will birth them from our third eyes, our thighs, etc” and show their misogyny such symbolism was used.

She also talked about Bible saying that a child(Jesus) was born without intercourse, calling him the son of God and is sinless/holy. She said that all these are attempts to instill the thought that sex is immoral. While it is true for Christianity that it castigates women as those who make women sin, it is not the case for Hindu dharma. The Shiva who wanted to claim he can give birth too as per Shalini, gave half of himself to Shakti and took the form of Ardhanareeswara.

However much anti-Hindus want to claim that Hindu dharma is patriarchal, misogynist and what not, Hindu dharma values lives in their true forms and have different rituals to worship and value them. While menstrual blood is thought as impure by other religions, Hindu dharma has a unique practice, Raja Parba, in which Bhuma Devi is left to rest for a few days as she is believed to undergo the menstrual cycle on those days.

However it is no surprise for a woman who follows Thirumavalavan who said Hindu temples have obscene figurines, to denigrate the religious symbols of Sanatana dharma. While Shalini talks in a positive note about a male deity wearing a symbol that denotes female genitalia, her intention is anything but. Note how she says that worshipping women was the indigenous culture.

Lately there have been attempts to separate different sects of Hindu dharma to claim that a religion in the name of “Hindu” never existed. In this attempt people who peddle this propaganda claim that Shaivite and Vaishnavaite schools of thoughts are indigenous to Tamil culture and are different from Hindu dharma. It appears that even if the sun sets in the east and rises in the west against nature one day, such people will never stop their efforts to uproot Sanatana Dharma.