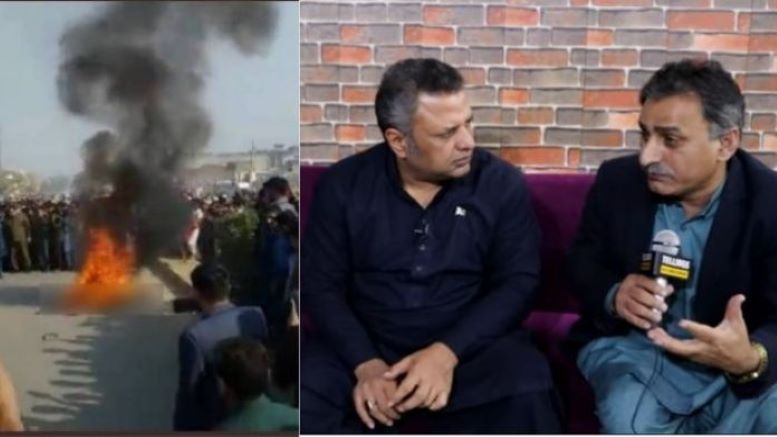 A Pakistani journalist revealed how schools in the Islamic nation were propagating Hindu hatred. He was speaking in a TV show titled ‘Tellings with Imran Shafqat’ where he was one of the panelists. The revelation came in the wake of a Sri Lankan factory manager being lynched brutally for ‘blasphemy’.

During the course of the show, the panelist while lamenting about students being indoctrinated with the bigotry and intolerance against the Hindu society stated “What are our children being taught in schools? When my children return from school, they ask me bizarre questions. One day, my son asked whether we have Hindus in Pakistan. I told him about my Hindu friend. He then told me how his teacher encouraged him to kill Hindus in Sindh”.

The journalist also brought to light the fact that his son had been taught in school that if there are Hindus in Sindh then they should be killed. The journalist even met the principal to complain against this kind of hatred while adding that such indoctrination and grooming of children was disturbing. “We have to keep an eye on what they are being taught. This (educational) system that has been running for 40-50 years is responsible for the indoctrination”, he opined.

Recently, a Sri Lankan man who was accused of ‘blasphemy’ for allegedly taking down and tearing a poster that contained salutations (“Durood”) on the prophet of Islam was tortured, killed, and then set on fire. Pakistan’s blasphemy laws are heavily biased against the minorities and more often than not, they are misused. In August this year, an eight-year-old Hindu boy became the youngest to be charged with blasphemy.

As HinduPost had highlighted in March this year, in Pakistan lives have been derailed, individuals burned alive, and entire colonies torched over false allegations of blasphemy against Islam. Unlike renowned Pakistani televangelist, Islamic scholar, and member of the National Assembly Aamir Liaquat Husain who had mocked Hindu deities on Twitter and yet didn’t even have to face any criminal inquiry for open sacrilege against Hindu Dharma, those accused of blaspheming against Islam aren’t afforded the privilege of a retraction or apology.

At least 75 have been extrajudicially killed, and hundreds imprisoned, over the intangible and victimless “crime” of sacrilege against Islam in Pakistan. The Islamist mob violence in the country is encouraged by gory blasphemy laws, which establish capital punishment for outraging Islam alone, inherently relegating other religions and ideologies to the periphery of judicial egalitarianism and pushing non-Muslim minorities outside democratic bounds.

Similarly in April this year, HinduPost had brought to light how school textbooks in Pakistan actively promoted hatred against Hindus. School-going children are being indoctrinated through state-sanctioned textbooks that demonize Hindus by calling them Kafirs (derogatory slang for non-believers) and saying that all evils that have fallen upon Pakistan are due to the Pakistani Hindus.

Further, Pakistani Hindus belonging to different fields can be seen quoting school textbooks that have normalized hatred for Hindus and Hindu Dharma. They have also pointed out the intolerance towards Pakistani Hindus being propagated through these textbooks whose contents are prejudicial to Hindus terming them as the source of all evils. Hindus have been relegated to second-class citizens confessed youth who were speaking in the BBC Urdu documentary on the Pakistani education system’s indoctrination.

Moreover, Hindus of Pakistan in general and Sindh, in particular, are living in the shadow of fear with abductions, rapes, and murders of Hindus becoming a common feature there. With such indoctrination of children through the education system itself, it is no wonder that the minorities of the country are facing a dire situation in the Islamic nation.