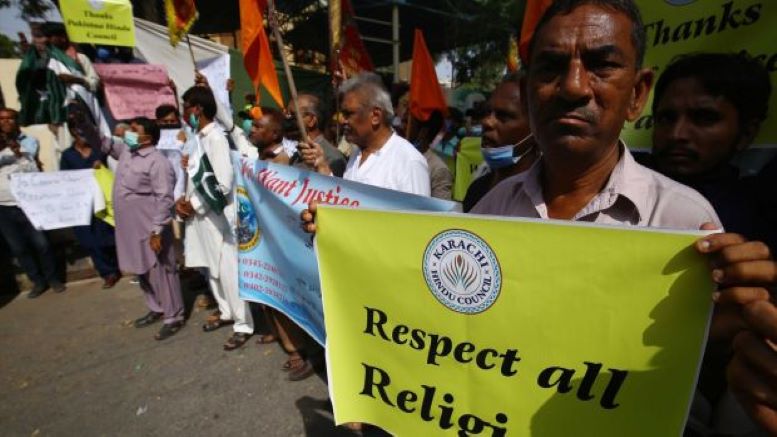 In an outrageous and shocking ruling, an 8-year-old Hindu boy became the youngest to be charged with blasphemy in Pakistan. This is nothing but a travesty of justice because minors are usually safeguarded against punitive action under general laws in a civilized world.

The child, who is currently in protective custody, faces a possible death penalty after he was accused of having intentionally urinated in a madrassa library. His family has also gone into hiding after several members of the Hindu community fled Pakistan Punjab’s Rahim Yar Khan district following an attack in broad daylight on a Hindu temple.

Blasphemy charges carry the death penalty in Islamic Pakistan. A member of the boy’s family pointed out that the boy didn’t even understand what his crime was and why he was being kept in prison.

“We have left our shops and work, the entire community is scared and we fear backlash. We don’t want to return to this area. We don’t see any concrete and meaningful action will be taken against the culprits or to safeguard the minorities living here,” the family member said.

This shows how Hindu minorities in Pakistan have a sword dangling on their heads at all times. In Islamic Pakistan, Hindu minorities have no rights and even minors aren’t safe. More often than not blasphemy charges are pressed to either exact revenge or justify Islamic vandalism as in this case.

It is also essential to point out that blasphemy laws are heavily biased against the Islamic majority and offer no protection for its Hindu minorities. The west conveniently overlooks such blatant violation of human rights where a mere child is now staring a probable death penalty.

It is futile to expect that the Lutyens cabal and other aman ki Sasha advocates would take a stand on the issue but this case does bring back the focus on the plight of Hindu minorities in the Islamic nations of the Bharatiya subcontinent. This also underscores the need for laws like the CAA against which the cabal had raised a hue and cry.

It cannot be emphasized enough that Bharat is the only homeland for Hindus and hence it has a responsibility to protect minority Hindus facing persecution particularly in Islamic nations like Pakistan, Bangladesh, and Afghanistan where the Sharia and not rule of law reigns supreme.

An 8-year-old being charged for blasphemy amounts to the biggest human rights violation and the civilized world needs to act in the interest of protecting such rights. However, such rulings charging a child for blasphemy does shake the consciousness of the civilized.