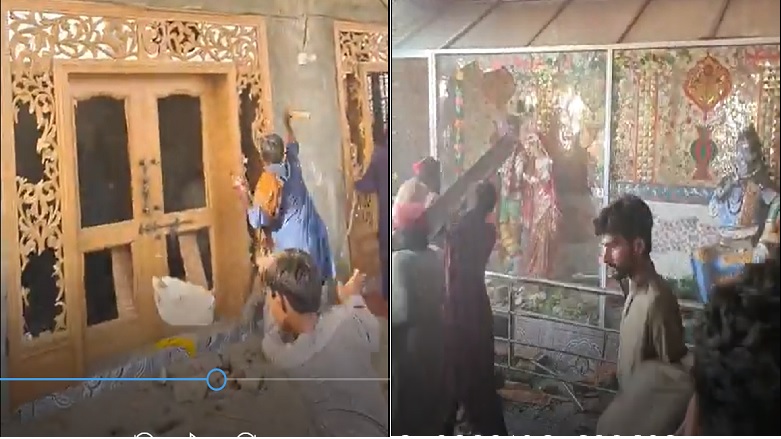 In a brazen attack on a temple in broad daylight, Islamists vandalized a Hindu temple in Bhong city of Rahimyar Khan district, Punjab province, Pakistan. What is more, in a clear indication of how such Muslim fanatics operate freely in the ‘Naya’ Pakistan of PM Imran Khan, the attackers chose to live telecast their attack on Facebook.

The video of the painful desecration and vandalization of the Hindu deities was shared by a Pakistani human rights activist.

You are free to go you temple? Watch this brazen attack on a temple in the broad daylight.

Another bad day for #Hindus as Ganesh #Temple in Bhong city of Rahimyar Khan was attacked by miscreants. The beasts daringly live telecast the attack on Facebook: https://t.co/uVq8UYBkQB pic.twitter.com/SzGrtIxEzk

One can see the complete video on Facebook. It shows a crowd of men, including minor boys, chanting the usual Islamic slogans ‘Nara-e-Takbeer..Allah hu Akbar‘ (Shout out loud…Allah is greatest). They smash everything they can lay their hands on, especially the murtis of Sri Ganesh, Bhagwan Shiva-Parvati, Radha-Krishna etc.

A majority of Pakistani Hindus are from the so-called Scheduled Caste/Scheduled Tribe communities. This poor micro-minority which forms just 2-4% of the total Pakistani population tries its best to maintain a low profile and quietly practice its ancestral religion and way of life despite brutal state and societal persecution. They dare not utter a word against Islam or Muslims, despite routine humiliation and denigration by Muslim clerics and in Pakistani textbooks, media and social discourse for being ‘idol-worshipping kaffirs‘.

Even the most rabid propagandist will be hard-pressed to claim that Pakistani Hindus are ‘Brahminical supremacists’. This is the most common charge against Hindus levelled by the anti-Hindu cabal in Bharat consisting of radical Ambedkarites, Dravidianists, Islamists, Christian missionaries, Communists and left-liberal sepoys.

So if they are not ‘Brahminical supremacists’, why is the poor Pakistani Hindu still not allowed to maintain the handful of temples he/she is left with, and why do so-called seculars of Bharat remain silent on this brutal human rights violation? The story is the same in Bangladesh, and so is the silence from our human rights cottage industry. Why do people who claim to be secular and liberal oppose the CAA law which offers refuge in Bharat to the hapless Hindu minority from our Islamic neighbors?

The answer is staring us in the face: so-called champions of secularism, liberalism etc. do not have a problem with a specific Hindu tradition or belief, their problem is with the entire religion. They just want to see Hindu Dharma annihilated and couldn’t care less whether a Hindu is murdered, raped or discriminated, unless that Hindu suffering can be used to further their end goal of erasing Hindu identity by playing off one Hindu community against the other.

Hindus have no allies, and definitely not in the secular Republic of India. Unless we have a civilizational nation state which unapologetically and unerringly stands up for Hindus and Dharma, Hindus will continue to suffer.