Another Kairana? Aligarh’s Hindus Insecure After Molestation of Newly-Wed Woman 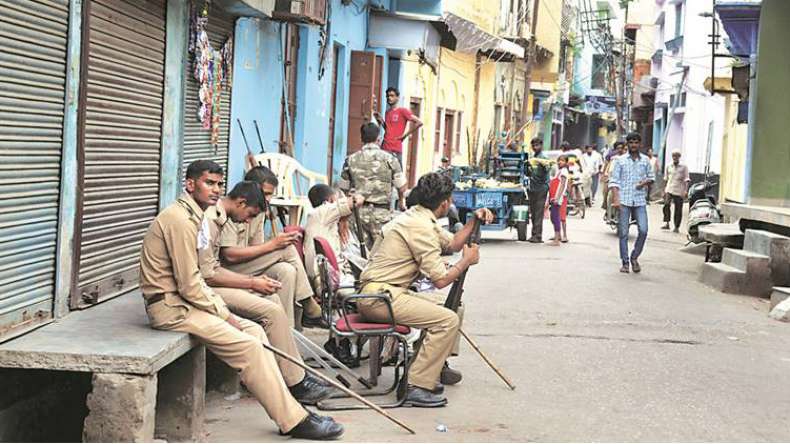 A 19-year-old newly married Hindu woman was molested by four Muslims – Nadeem, Suheil, Ismail and Danish – on Wednesday night which led to a clash between the two communities. Deeply insecure due to many such incidents over the years, many Hindu families in the Babri Mandi area of Aligarh are now contemplating migrating to safer areas.

As per this NewsX report –

“The victim in her complaint mentioned that she and her husband were returning home when the Muslim youths molested her and tried to drag her in a secluded lane. When the woman shouted people from both the communities gathered and then there was a tussle between the groups. The victim also told the police that some people threatened to kill the woman’s husband with a knife and also fired a few rounds in the air.

Police on receiving information rushed to the spot and then the situation was brought under control. An FIR was registered against the four youths — Nadeem, Suheil, Ismail and Danish — on charges of outraging modesty. While Nadeem was arrested today, the rest are absconding.

More than 27 Hindu families put a sale sign outside their house and shops in Babri Mandi area of Aligarh as they felt threatened and unsafe. The Hindu families also urged the district administration to buy their houses and shops.”

“When TOI visited the Hindu families that had approached the administration, Vinay Varshney, who was one of those who had signed the affidavit stating his house was on sale, said, “There are 10 families ready to sell their properties. It is not possible to live in this area. We are in a minority. Ten families want to sell their houses right away but every family wants to eventually leave.” Sudha Varshney, another local resident who has been living in the area for 38 years, said she wants to leave. “Our daughters are not safe here. Hooliganism and harassment are the order of the day. The roads are narrow and some boys from a different community sit on both sides of the path making it difficult for our girls to even go to school. Many of them have refused to attend class fearing for their safety.”

Additional district magistrate (ADM) Avadhesh Tiwari said, “Only eight people wanted to sell their properties as they felt unsafe. This was done to garner publicity in a situation that has more to do with law and order. Miscreants involved have been arrested. We will make sure no family exodus takes place. The situation is normal now.”

The ADM has dismissed the lived experience, pain, fear and threat perception of the Hindu families residing in Babri Mandi as a ‘publicity stunt’! While he admits that a law and order problem exists in the area, he says the situation is ‘normal’ now. One wonders how such officials would react if it was their daughters getting harassed on the way to school? Wouldn’t they try and garner all the ‘publicity’ they could for their situation? But, it seems, ordinary Hindus are not allowed even to ask for protection from the administration under SP rule. Our seculars want that Hindus   should put up with their daughters being molested on the way to school in order to preserve ‘communal harmony’.

This is the exact same reaction we saw in Kairana, after news emerged about hundreds of Hindu families having fled from there due to targeted murders, extortion, hooliganism, and rape /molestation / sexual harassment of Hindu girls. Even after dozens of Hindus expressed their tales of distress and pain to whoever cared to listen.

To those Hindus who choose to believe the secular obfuscation over this issue – ‘Just one molestation incident cannot spark an exodus! This is all Hindutva scaremongering!’ – consider this:

This is just a random sampling – there will be more such cases of sexual harassment, intimidation etc. if one were to research Hindi media reports over the years.

There is a consistent pattern to how the ‘mahaul’ (environment) in mixed population localities/cities gradually deteriorates, before the Hindus living there are left with no choice but to speak up or flee. And this is not confined to UP alone – it is happening even in ‘cosmopolitan’ cities like Delhi! Parties like Samajwadi, Congress, AAP, TMC, JDU, RJD and our left-liberal media and academics would prefer Hindus to suffer in silence and follow Gandhian preaching.

“Its just a political conspiracy, we are all living happily” – the Muslim Response

Whenever there is a report about Hindus being under siege due to Islamist violence, or suffering due to Muslim hooligans/criminals, each and every Muslim spokesperson offers a tried and tested defense: it’s just propaganda of Hindutva extremists, we live in perfect peace and harmony with our Hindu ‘brothers and sisters’. The uniformity of the response, from UP to West Bengal, is surreal – almost like it was well-thought out and widely disseminated.

The TOI report quoted earlier, shows the same is true of the Aligarh situation as well. And this time, some Muslim residents of Babri Mandi have even decided to mock their Hindu neighbours by putting up ‘For Sale’ signs as well. This is what the report says –

“Significantly, even as as the district administration tries to persuade the Hindus to stay put, notices were seen put up outside the homes of Muslim families, that said, “We don’t feel safe here and our houses are for sale.” The Muslim families that put out the boards, said a prominent local leader was fanning the tension. Gulzar Ahmad, convener, UP Welfare Minority Association, added, “Since the talk about the so-called exodus from Kairana, there have been repeated attempts to say something like that is happening everywhere in UP. This is not the truth about Aligarh’s Babri Mandi.”

So this is the politically correct take on UP – There was no Hindu exodus from Kairana; There is no fear of a similar exodus in Aligarh and other parts of UP; there are no riots happening in UP; women are completely safe in UP. Hindus can choose to believe it at their own peril.