Sant Dnyaneshwar Maharaj – one of the greatest Bhakti saints 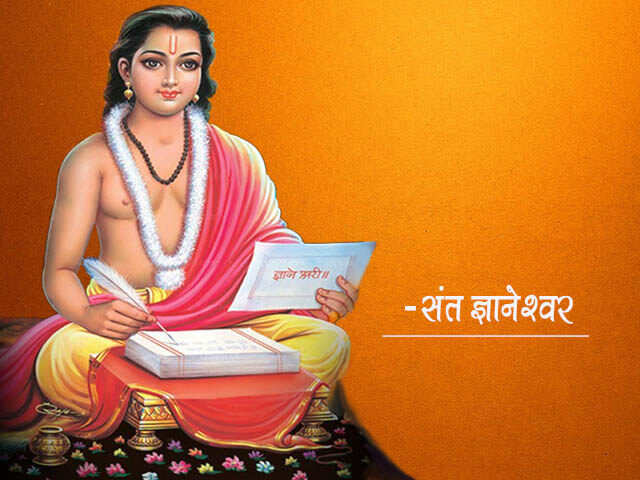 Maharashtra is as much a land of Sants as it is of warriors and freedom fighters. Bhakti movement’s Sant Dnyaneshwar Maharaj brought Dharma to the common masses by writing and preaching in Marathi. He was born on Krishna Janmashtami.

Sant Dnyaneshwar Maharaj came from a family who held the ‘watan’ of Kulkarni in Apegaon, located on Godavari’s northern bank eight miles east of Paithan. Dnyaneshwar (1275 CE/Shaka 1197) was the second son of Vithalpant and Rukminibai. The couple had three other children; Nivrittinath (1273 CE/Shaka 1195), Sopan (1277 CE/Shaka 1199), and Muktabai (1279 CE/Shaka 1201). Vithalpant had taken Sanyas but returned home to Alandi on the instruction of his Guru. The children were born in Alandi.

Vithalpant and Rukminibai were very religious and devout. The Brahmins are said to have refused to perform the ceremony when Vithalpant wanted to perform Nivrittinath’s thread ceremony. The reason for refusal was that Vithalpant had returned to grihastashram after taking Sanyas.

The couple is said to have ended their life by jumping into the confluence of Ganga and Yamuna at Prayag, leaving the children orphaned. The four children were ‘outcasts’ and had to resort to begging for alms for a living.

Dnyaneshwari (Bhavarth Dipika) and other works

Dnyaneshwari or Bhavarth Dipika is a commentary on the Bhagavad Gita composed by Maharaj at the young age of sixteen (thirteen as per some sources). The grantha brought out the deeper meaning and significance of the conversation between Bhagwan Krishna and Arjun. The grantha is important from both philosophical and poetic points of view.

The use of language, words, phrases, similes, and metaphors is simple and appropriate. The grantha explains complex philosophy in simple and understandable language. His thoughts reached the masses in a better manner because it is written in Marathi, the language of the masses. Dnyaneshwari is the basic grantha of the warkaris.

The grantha is also a must-read for Marathi literature and poetry enthusiasts. Maharaj’s spiritual experiences were written down by him in 800 couplets grantha known as Amritanubhava.  Sant Maharaj also composed Abhangas to spread his message. He also authored Changdev Pasashti and Haripath.

Nivrittinath became Maharaj’s Guru who initiated him into yoga and spiritual knowledge. The brothers and their sister undertook pilgrimages including Rameswaram and Madurai. His meeting with Sant Namdev at Pandharpur translated into a friendship. Maharaj initiated the Pandhari sampradaya and warkaris visit Pandharpur Ashad and Kartik Ekadashis.

Jani, Narahari, Gorakumnhar, Sena and Chokamela were some of his prominent disciples. He took samadhi at the young age of twenty-two at Alandi on the thirteenth day of Krishna Paksha of Kartik month.