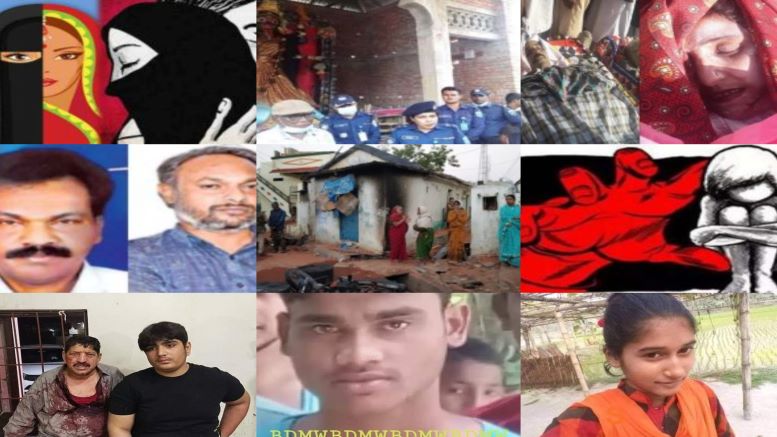 In this weekly summary for the period from 7 March to 13 March 2021, we hope to provide a snapshot of such crimes and hopefully awaken more people around the world to this human rights crisis:

1) At least 10 people, including 3 policemen and 3 journalists, were injured when radicals from a particular community indulged in wanton violence in Telangana’s Bhainsa on March 7. The youth of a particular community burnt down two auto-rickshaws, one car, and two two-wheelers. Brandishing swords, they were seen roaming freely. Few houses and one vegetable shop were burnt down.

2) A 29-year-old shopkeeper Mainuddin aka ‘Mannu Yadav’ has been arrested and booked under the new anti-conversion law in Gorakhpur after a Hindu woman alleged that he had married her in a temple on a false identity. Police said that the woman, who is in her early twenties, filed a complaint on Sunday after she came to know that Mainuddin was marrying another woman from his community.

3) A case of grooming has come to light from Kanpur where one Mohammed Arif befriended a young girl on Facebook by hiding his religious identity and raped the young woman. The woman alleged that the man had identified himself as Rajveer Kesariya on Facebook and raped the woman by promising to marry her.

4) 55-year-old Hindu Ramakrishna lost his life due to the callousness of auto-driver Syed Sheikh Ali who not only ran over the victim but also dumped the grievously injured man in the trash instead of taking him to the hospital. Ali even robbed Ramakrishna of INR 3000 and his cellphone.

5) The brutal rape of a four-year-old by her Muslim neighbor in Telangana’s Bhainsa has come to light. The girl is a resident of Mirzapur located 5 kilometres away from Bhainsa in the Nirmal district of Telangana. She resided there with her parents and paternal grandmother. Her parents are field laborers and the accused is their Muslim neighbour who took advantage of the girl being alone to brutally rape the child.

1) A five-member Hindu family in Pakistan was found dead with their throats slit under mysterious circumstances on Friday. The bodies were found in Abu Dhabi Colony, 15-kilometer away from Rahim Yar Khan city of Punjab province.

2) 13-year-old Kavita was kidnapped and forcibly converted to Islam.

3) A Hindu father and son duo were abducted and tortured by Islamists in Shah Hussain, Khairpur.

1) A murti of Devi Kali was vandalized on Wednesday (March 3) night at Chilmari sub-district in Kurigram District of Northern Bangladesh as reported by Bengali language national daily of Bangladesh Kalerkantho on March 4, 2021.